You are here: Home / Current Events / Zuma is Not the Main Problem, Settler and Neo-Colonialism Is! 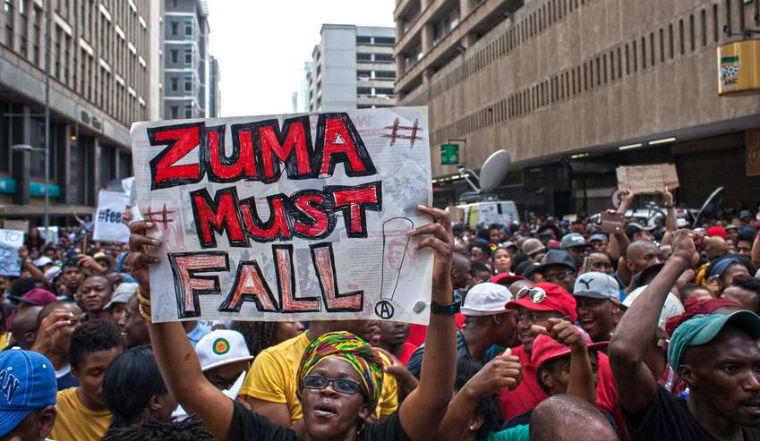 As the All-African People’s Revolutionary (A-APRP) commemorated African Liberation Day this year  with our political family, comrades and friends globally under the theme: African Youth Organize Against Settler and Neo-colonial Regimes from DRC (Congo), to Standing Rock and Palestine we observed that  many of the African Liberation Day events held throughout Azania/South Africa had questions of land  dominate the presentations. The issue of Land and its resources is still the primary contradiction in Azania/South Africa. Those who control the resources control the economy. The 80-90% of the land that was stolen by European settlers, from the collective land tenures of Azania/South African indigenous  peoples (Zulu, Xhosa, Basotho, Bapedi, Venda, Tswana, Tsonga, Ndebele, Khoisan), still remains in the settlers control . Simply put 80% of the land is controlled by 20% of the population, including the white settler class and a small elite class of African and Indian collaborators. This is where President Jacob Zuma comes in he is seen as one of the African collaborators. He got caught, like his African National Congress (ANC) brother Cyril Ramaphosa in the Marikana strike scandal. Zuma’s hands were caught in the cookie jar as Zuma had his own personal land grab. He finds himself trying to survive between the right wing and all the forces left of him. Strangely enough there are interesting alignments on land reform in general and the most quoted example is Zimbabwe, which has been the only successful land reform in the region.

In Azania/South Africa the Pan-Africanist Congress of Azania (PAC), the first party to declare that land in Southern Africa and indeed in all of Africa belongs to its indigenous people, supports the land reform in Zimbabwe and the right of the Zimbabwean people to elect Robert Mugabe as many times as they feel fit. This holds true for all the parties that grew out of the Black Consciousness Movement (Azanian People’s Organization (AZAPO) and the Socialist Party of Azania (SOPA)). More recently the Economic Freedom Fighters (EFF) has decided for the Zimbabwean people that they have no right to elect who they want but even they have to support the indigenous people in Zimbabwe getting their land back. But it is the Democratic Alliance, the self proclaimed liberal party that supported by many of the settler class that has the most to say against the radical (revolutionary) land reforms in Zimbabwe.

Zuma under fire is now singing the language of the revolutionary organizations and radical land reform movements “Expropriation without compensation” and calling for constitutional amendments supporting such a move.  There is struggle inside the alliance between Coalition of South African Trade Unions (COSATU), South African Communist Party (SACP), ANC leaders and their rank and file on the question of land and the support of Zuma’s new declarations.

What Zuma and the ANC does in the face of the peoples stepped up call for their land and the calls for Zuma’s resignation will determine ANC’s future as a relevant party. The beloved Nelson Mandela did nothing to return the land to the people, his successor Thabo Mbeki did nothing and Zuma has done nothing.

Zimbabweans struggle against settlers and ZANU-PF’s history is not defined by President Robert Mugabe, one man, but the leadership and the party he represents which has successfully guided Zimbabwe through two phases of African Liberation, the second and third Chimurenga (revolutionary armed defeat of the settlers and the redistribution of the land to the indigenous African people). These accomplishments are critical on the road to imperialism’s defeat in Africa. What will be the blow to imperialism when true land reform takes place in Azania/South Africa? Zuma is a corrupt leader but removing him is not enough. The critical decision is whether the ANC decides to support the will of the masses that fought and died for control of their land and resources or to continue to collaboration with the forces of global imperialism that supports the settlers.  The choice is between Neocolonial/Settler politics or the politics of liberation and land.