You are here: Home / Feature Story / Zionism is Racism 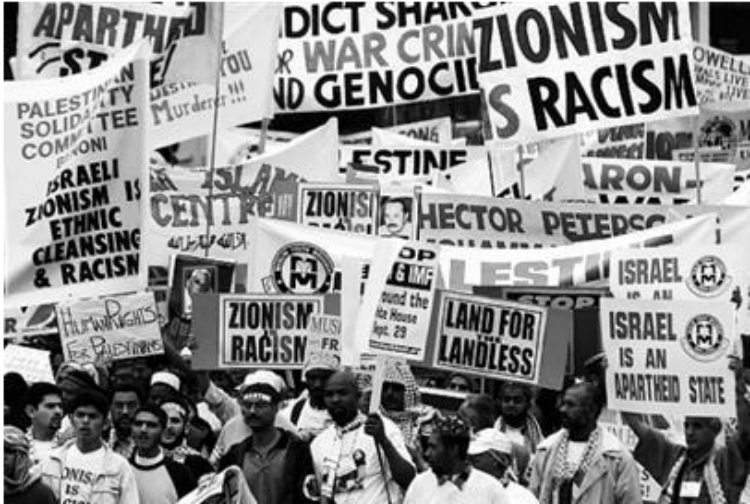 The All African People’s Revolutionary Party is clear that zionism is a racist and dangerous ideology to Palestine and the world.

The All African People’s Revolutionary recalls the decision 40 years ago the United Nations (UN) on November 10, 1975 that declared that zionism is racism.

“Recalling its resolution 1904 (XVIII) of 20 November 1963, proclaiming the United Nations Declaration on the Elimination of All Forms of Racial Discrimination, and in particular its affirmation that “any doctrine of racial differentiation or superiority is scientifically false, morally condemnable (and) socially unjust and dangerous” and its expression of alarm at “the manifestations of racial discrimination still in evidence in some areas in the world, some of which are imposed by certain Governments by means of legislative, administrative or other measures, …”

(Resolution 3379) “Determines that zionism is a form of racism and racial discrimination.”

The history racism of the Israel’s zionist occupation of Palestine is evidenced in the cruel and deadly treatment of Palestinians starting with the displacement of over 800,000 Palestinian through terrorist acts and intimidation starting with the Stern and Irgun paramilitary gangs in the 1940’s responsible for massacres of men, women and children to establish a exclusive zionist state with a privileged European majority http://guardian.150m.com/palestine/jewish-terrorism.htm  and today through Israeli Defense Force who continues to protect Israel’s current illegal occupation and continued expansion with murder and violent destruction of Palestinian homes, olive groves, and sacred spaces. Like the displacement and occupation of indigenous peoples land in the America’s and Africa, settler occupations are led by racist ideologies, whether white supremacy in the United States, or Apartheid in South Africa/Azania. Zionism is a racist supremacist ideology. The Organization of African Unity was clear in its resolution 77 which became a part of resolution 3379.

“Taking note also of resolution 77 (XII) adopted by the Assembly of Heads of State and government of the Organization of African Unity held in Kampala from 28 July to 1 August 1975 which considered “that the racist regime in occupied Palestine and racist regimes in Zimbabwe and South Africa have a common imperialist origin, forming a whole and having the same racist structure and being organically linked in their policy aimed at repression of the dignity and integrity of the human being,”

The United Nations of 1975 was a very different UN than 1948 which established the occupation, the settler-colony of Israel, on Palestinian land. In 1948 most western European members countries were colonizers. The UN in 1975 represented the results of anti-colonial struggle across the globe-the resistance to Europe’s racist domination. In the United Nations in 1945 countries in Africa and the Caribbean were only five Ethiopia, Egypt, Liberia (Africa) and Haiti and Cuba (Caribbean). The United Nations grew from 51 countries to 147 by 1975. Eight of twenty- five sponsors of the resolution 3379 declaring Zionism racism were African.  (see below)

The All African People’s Revolutionary Party is clear that zionism is a racist and dangerous ideology to Palestine and the world.  The act in the UN in 1991 can’t revoke reality. Now the whole world must say what the UN is afraid to say, zionism is racism. The AAPRP supports the Boycott, Divestiture and Sanctions (BDS) movement but we also know until the racist ideology of zionism is defeated there can be no justice in Palestine.  Zionism like apartheid, like white supremacy can’t be reformed. As the song goes, “call it what is, call it what is, call what is..” – racism.

•   Zionism is the Enemy of All African People (pdf)…

•   The Palestine Review provides the largest online library of free e-books on Palestine, the Palestinians, and Palestinian history available anywhere.

•   Miko Peled, an anti-Zionist Jew, and son of a general in the Israeli army explains why he’s come to reject Zionism in favor of a democratic, secular single state, and why the world is silent on Israeli crimes in Palestine http://mikopeled.com/2014/07/28/why-is-the-world-silent-on-israeli-crimes-in-palestine/