You are here: Home / Feature Story / World Starvation and A Case for Pan-Africanism 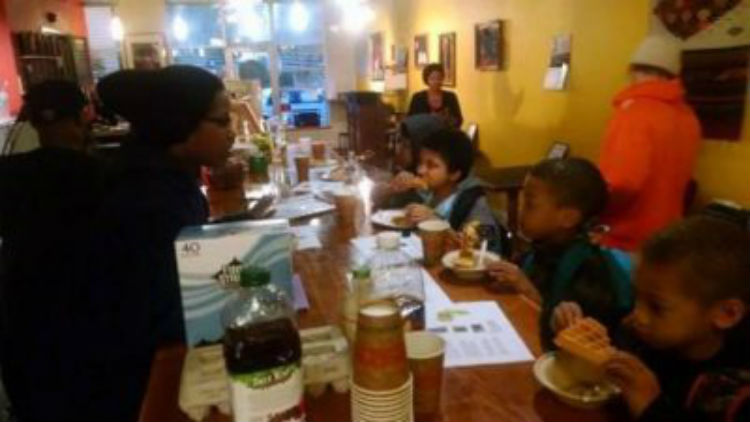 Often, when organizers for the All-African People’s Revolutionary Party (A-APRP) are working to organize our people, the obstacle we encounter is our people lack concrete examples for how making Africa primary will benefit them.  Many Africans tell us the concept of African unity focused around a united and socialist Africa “sounds good”, but they fail to see it as a realistic objective.  As a result, since our people face suffering wherever we live, most of us find plenty to organize around by focusing just on our micro-nationalist identities, addressing issues that confront us in those local areas.  In Europe this may be anti-immigration racism.  In the Americas and Australia, this can be police terrorism.  Throughout Africa, this can be a multitude of problems that affect us from lack of electricity to limited educational opportunities to combatting disease.

All of these local struggles are critically important, but they are all part of the global attack being waged against Africa and African people.  We can say this with extreme confidence because we can point to problems Africans are facing from the Caribbean to South America to Canada and Africa.  And, in each case, although the problems are being manifested in those local areas, the roots of the problems can easily be traced back to the subjugation and domination of the African continent.  A great example of this is the disparity of available food for African people today.  According to the United Nations (UN) Committee on Starvation and the African Union’s (AU) Africa Report, there are at least 300 million people in Africa who suffer from starvation today.  By starvation, we mean not having enough food to develop and sustain a healthy life.  We are talking about millions of young people who lack the necessary sustenance for proper bone development, teeth health, and internal growth and protection against most diseases.  There are another approximately 200 million Africans who live outside of the African continent who also suffer from starvation.  According to the UN, there are 795 million people in the world today who don’t have enough to eat.  What this means is 63% of the people starving in the world are African.  Anyone outside of the most vile and primitive type of racist today would have to agree that this reality is completely unacceptable and that something must be done to eliminate this problem.  The question is what?

This is where Pan-Africanism arises as the logical and reasonable solution to this problem of starvation. Fortunately, most of the research has already been done for us.  If we look at the world of food today, we can see some stark contradictions.  For example, the San Joaquin Valley is a stretch of land in Northern California in the United States that extends between the cities of Sacramento to Bakersfield.  It’s about two hours east of San Francisco and three hours north of Los Angeles.  It’s an agricultural region that is well known for its huge capacity in producing food for the entire world.  In fact, again according to the UN, and other sources, the San Joaquin Valley has consistently been one of the top five food producing regions in the world over the last 30 years.  The UN’s Committee on Food Production reported that in 2015, the San Joaquin Valley produced 90% of the 12.8% of agricultural production generated from the entire United States, and you can probably guess that the U.S. is the world’s largest food producer.  What this means is no matter where you reside on the planet, if you have consumed a pistachio, almond, walnut, citrus fruit, raisin, grape, glass of wine, and any assortment of vegetable and dairy products, you have more than likely consumed something produced in the San Joaquin Valley.  The phenomenal thing about this is that the entire San Joaquin Valley consists of 70,231 hectares of arable land.  In other words, with the full benefit of all of the technological capabilities developed from the wealth originally produced from the transatlantic slave trade, U.S. food producing corporations have managed to become a consistent and reliable food producer while relying on this relatively small portion of land.

We say small because according to those same UN and AU committee reports, comparably, Africa has 600 million hectares of arable land that are barren and being utilized for absolutely nothing productive today.  This land can be found from Cairo to the Cape and Accra to Addis Ababa, but due to the lack of technological resources coupled with the problems of neo-colonialism and the domination of imperialism in Africa, millions of Africans are starving today.

Pan-Africanism is the cure to this ill because there is absolutely no capacity to resolve this starvation problem in the micro-states.  Throughout Africa, we are reliant today on aid organizations that are dependent upon budgets provided in large part by imperialist countries and companies for their work to supply food.  This usually means, their work is tied to political agendas that do nothing except expand and solidify imperialism in Africa.  The other source of so-called help comes from the evangelical forces who invade Africa and dangle food as a bribe to permit them to continue to infect the continent with their programs of spiritual colonialism and domination.  In the so-called diaspora, we rely on attempting to have influence in the bourgeois political parties as our only method of addressing creating resources for our suffering people.  In this context, the most militant and self-reliant idea is to mimic capitalism, the very system that has created all of these problems for us, with the idea of creating capital that will allegedly be used to eliminate the collective problems of our people.

We don’t believe any of those poor excuses for solutions are worth pursuing another minute discussing. Instead, we look towards our Mother Africa.  We call upon the African masses to recognize that there is enough arable land in any two or three of the neo-colonial micro-states in Africa to produce more food than the San Joaquin Valley presently produces.  That’s enough food to feed all of the starving Africans on Earth!

With the solution staring us in the face, the question then becomes how can we make this happen?  The answer is that we cannot utilize Africa to serve its people until we take steps to wrench our homeland from the clutches of the multi-national pirates who control her for their continued accumulation of wealth at the expense of our people. Since the saga we are telling here about food can also apply to diamonds, oil, rubber, coltan, bauxite, and many other valuable resources our Mother Africa produces that we presently don’t control, we are talking about how it is that we can take back control over Africa?  The answer is the forces that control her today are extremely organized.  These multi-national crooks control the governments who control the micro-states.  They develop and establish the international organizations that manage resources.  They influence the international organizations like the UN and the AU.  They control the militaries and they even dominant the messaging around everything that’s happening.  If we are to solve this problem of starvation, we must become organized on a level that surpasses that of what our enemies are utilizing against us today.  Once we do that, we can begin to build capacity to take control of our territories.  With the unity that will follow we will have one continental and socialist governing structure.  We will then be able to begin to carefully plan how to make use of all that arable land and produce food that can be used to sustain our starving people as well as the remaining starving people on the Earth.

This increased capacity to produce food will enable us to change our status from that of a dependent people to that of a decision making people.  This will require the rest of the world to view and deal with us on an entirely different level than what we have seen to date.  This change alone will do much to change perceptions and actions by us and to us.  Imagine if you will a world where the ability to get food or any of the other resources mentioned earlier is dependent upon entities having to interact with our African people, organized into one socialist entity?  You think these governments are going to let their police shoot us down like dogs in the street if they are dependent upon us establishing fair terms for them to trade for oil for heating with them?  Coltan for digital technology?  Food?  By the same token, do you really believe our people will have such little regard for each other when we realize that we truly have the capacity to determine the course of the world?

Pan-Africanism produces power for African people.  Something we lack today on every level.  We cannot generate the power we need to wipe out starvation (and every other problem) just in the U.S., Canada, Britain, Kenya, Mozambique, Egypt, Jamaica, Puerto Rico, or Brazil, but we can do it as a united people with Africa being our primary concern and focus.

Pan-Africanism is a practical solution to the problems we face.  And we can achieve it while holding onto what we find dear about being from Somalia or France or the Dominican Republic.  There is no reason for another generation of our youth to starve.  The solution is within our midst if we are willing to organize and come together to achieve it once and for all!