You are here: Home / Women / Women have the Right and the Duty to Fight 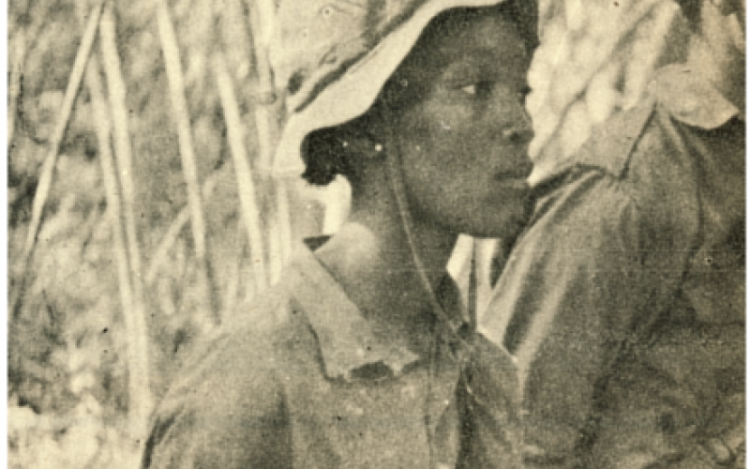 “The degree of a country’s revolutionary awareness, may be measured by the political maturity of its women” – Kwame Nkrumah

Josina Muthemba Machel, who was in the leadership of FRELIMO, the organization that fought for the independence of Mozambique, said “… the FRELIMO war is a people’s war in which the whole people must participate, that we women were even more oppressed than men and therefore we had the right as well as the will and the strength to fight! We insisted on our having military training and being given weapons! ”

As in Mozambique, the women of Angola also played a central role in the struggle. On March 2nd, Angola annually honors the bravery of four women who fought for Angola’s Independence. They are Deolinda Rodrigues, Irene Cohen, Engrácia dos Santos and Lucrécia Paim, whose names live on in the Angolan people’s memory, although they were ambushed, captured and killed.

Many who are inspired by the strong women in the film The Black Panther don’t know that the power and leadership of women is not a fantasy.  It is a fact that women have been repeatedly tested on the battlefields of the African Revolution, and their performance has been nothing short of exemplary.  There are thousands, maybe millions of names of African women who have given their lives for the liberation of Africa and today more than ever, it is important to share their/our stories and to understand why it is the duty of women to fight on every front and on every battlefield for our liberation and more importantly, to complete the Revolution.

As we celebrate the 50th anniversary of the All-African People’s Revolutionary Party and the publication of the Handbook of Revolutionary Warfare written by President Kwame Nkrumah, women increasingly discuss the next stage of the revolution and the role women will play. It is a topic that has been neglected.

Already, women have done everything – particularly in actual military combat against Africa’s enemies.  But they have also played critical roles in combating cultural backwardness and the ideological and political roadblocks that have supported classism, sexism and isolation within our societies. In fact, African women, women in Cuba and Vietnam were the first women in the modern 20th century movements to engage in combat roles. This tradition continues in battles led by women in India, or women workers in Central and South America, and women leading the Black Lives Matter movement. Nevertheless, there are still cultural barriers to the engagement of women in these struggles that must be broken down. This is most apparent in popular culture where women – particularly African women – are ridiculed and degraded.

Nkrumah says in The Handbook of Revolutionary Warfare:  we must 1) rapidly transform the old order; 2) address both the external and internal enemies and 3) begin the building of the socialist society.

Liberation and socialism will not be achieved without women challenging society on every front, attacking the vestiges of oppression and exploitation within our societies to free themselves and by extension the broader society.

Consider Jocina Machel’s story. Her family was very poor and from a small district called Namau in Cabo Delgado. Her family had a small plot of land but they barely had an opportunity to plant because they were always working for the Portuguese. The colonizers paid very low wages or in most instances refused to pay wages at all. They were forced to work for the companies growing cotton rather than plant for themselves. She said, ‘even the priests were bad’. When the Portuguese came to their homes, women were disrespected, and even married women were abused in front of their husbands, with husbands knowing that resistance meant torture. Consequently, women had no choice but to join FRELIMO to fight.

When women joined the struggle, ‘there was strong opposition to our participation because that was against our tradition.’ On every front, whether in Europe, Asia, Africa or Latin America, women and girls are used as war trophies, raped, sold and used to work for soldiers, abused by our men, and regarded as suitable only for ‘bearing children and taking care of our husbands.’ However, women are the majority and when women have played their role in the revolutionary struggle they have won decisively on all battlefronts. However, the greatest and longest battle is the battle to change our culture, radically transforming the ideological and political understanding and value of women within society. President Sekou Toure of Guinea said the exploitation of women is so natural, that to eliminate it, the system will have to be attacked at its very roots.

This is what we must do.

No revolution will be complete, nor will we see freedom and an equal society until women organize to change culture where it is outdated and holding back the forward progress of the society. We must destroy the structure of old norms, customs and traditions ‘at its very roots.’ Feminism alone cannot destroy the roots of feudalism, colonialism and capitalism. Bourgeois regimes cannot guarantee freedom for women through democratic elections. The rich benefit from the subjugation of the poor and working class and women are the majority in those demographic groups. Only a complete revolutionary struggle can destroy the vestiges of oppression in every aspect of society.

The problems of violence, poverty, homelessness and economic exploitation are women’s problems and having the greatest need for freedom women are best suited to lead the fight. Women truly do have a duty and right to fight. Women fought yesterday, they fight today, and they will fight tomorrow.