You are here: Home / Feature Story / What’s The Word?; It ain’t “Xenophobia”! 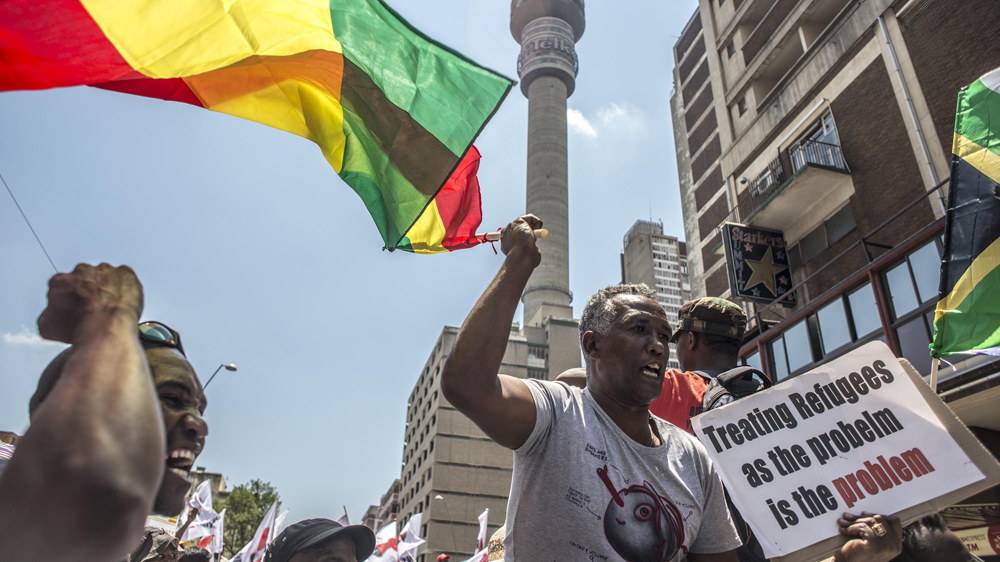 “Tell me brother have you heard from Johannesburg?
Sister/woman have you heard from Johannesburg? … We don’t know for sure because the news we get is unreliable, man … They may not get the news but they need to know we’re on their side.  Now sometimes distance brings misunderstanding, but deep in my heart I’m demanding: Somebody tell me what’s the word…”

The hit song: WHAT’S THE WORD?, by the late, great lyricist, poet, and conscious artist, Brother Gil Scott Heron is just as relevant today as it was when it was written decades ago.

All that has been in the news this month from Azania (South Africa) have been stories about Africans (apparently those born in the country), attacking African “immigrants” (those born outside of Azania, perhaps from Nigeria, Somalia, Zimbabwe, etc.).

And in the mainstream, and not so “mainstream” media, these confrontations have been described as “xenophobia” and/or “Afro-phobia”. Of course, we know that the term “phobia” is defined as: an extreme or irrational fear of or aversion to something.

What is the Real Cause of the Unrest?

The ONLY THING causing “fear” is that which causes “fear” among all working-class People: The inability to sell their labor in order to survive!   Unemployment and the lack of meaningful work create both fear and anger.  In the past 10 years unemployment in South Africa has increased from 21.5% to 29%.  This is the official rate!  Under counted youth and foreign workers make the real unemployment numbers even higher.  The official youth unemployment rate is higher than 56%.  All this is a ticking time bomb of frustration, anger and fear, not fear of other Africans, but fear of hunger, fear of homelessness, fear of the inability to provide for one’s children. There’s also the constant fear of being dispossessed by the outside corporate interests that continually enrich Europe and the USA, while leaving African people largely dependent and destitute.

The Africans born in Azania (South Africa) live in a society that, like all capitalist societies, cannot, and never will, offer it’s working classes the opportunity to live a dignified life, free of the oppression, homelessness, hunger, and dislocations.  However, capitalism will never accept the blame for unemployment and inequality.  Instead it blames the victim, telling people that unemployment is their fault or the fault of their neighbor, the other “tribe”, the other nationals.  This in turn has led to increasing violence in townships and poor communities.  One poor community in Cape Town saw 361 murders per 100 thousand people, while the richer community of Rosebank experienced 8 murders per 100 thousand people over the same four-year period.  This and other evidence clearly links unemployment and inequality to violence.  As in communities all over the world the frustration of unemployment has fueled the inflow of drugs.  Nyaope (a mixture of heroin, tobacco and marijuana) is epidemic in poor inner-city communities across the country.  Drug addition intensifies despair, further fueling crime and violence.

Who is the Real Enemy?

The sisters and brothers in Azania, consequently, not having a certain level of class-consciousness about who their real enemy is: the neo-colonial government which continues to protect the interests of what some have called: White Monopoly Capital.  It is true that the descendants of European settlers along with Europeans still in Europe control the businesses, industries, banks and monies that flow through the country.  This handful (of predominantly white men) is the capitalist class and they, with the support and complicity of their African collaborators decide the future of the masses of Africans.  These capitalists control the land, jobs and money and use this control to increase their wealth, increasing the inequality across occupied Azania.  It is unfortunate, that through their control of media and education they confuse the majority of people.  Most people are blind to the fact that capitalism is the source of their oppression, despair, anger, frustration and fears.

The current president, Cyril Ramaphosa, who is now a BILLIONAIRE, was (before the end of the Apartheid regime), simply a union leader. This level of opportunism and corruption is rampant, not only in Azania, but throughout the African continent. We call it properly: Neocolonialism, the Last Stage of Imperialism.  Over 50 years ago Kwame Nkrumah, the first President of Ghana, which gained independence in 1957, detailed the operation of neocolonialism in a book by the same title.  The economics of newly independent countries were still controlled by the corporate, industrial and banking interest that took root during colonialism. This new colonialism continued to operate with the collusion of local leaders that choose individual wealth over the interest of the masses of the country.

In Search of a Better Life!

Of course, we cannot overlook the REASON WHY Africans from Nigeria, Somalia, and other African countries have “migrated” to Azania. The same conditions which have driven the residents of El Salvador, Honduras, Guatemala, and other Central & South American countries to seek a better life in the US, prevail in African countries, in one word: CAPITALIST EXPLOITATION, in all it’s many forms.  An example is the western capitalist financial blockade of Zimbabwe.  The resulting economic disruption is the direct reason millions of Africans crossed the Limpopo River from Zimbabwe into Azania.  The US military destruction of Somalia has made life unbearable for millions. So, there should be no surprise when Somalis migrate and set up shops in townships in Azania.  We must welcome our brothers and sisters from every corner of Africa.  This increasingly Pan-African climate must be used to call for one socialist Africa and the total destruction of settler capitalism and neo-colonialism.