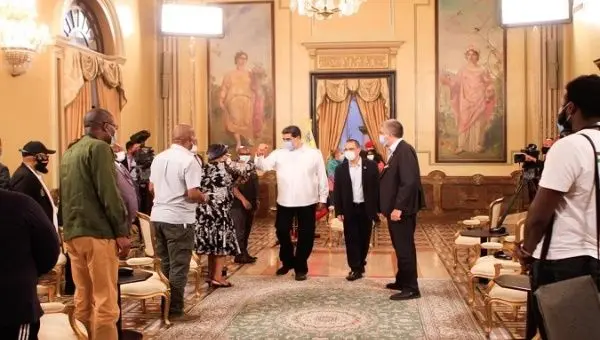 “Battle of Ideas” Around Voting and the Democratic Process.

Voting is a tool of a democracy, an integral part of a democratic process. Governments and Political Parties express their character through how they use this tool. This tool can be used as a weapon for the people or against the people. Venezuela gets this. The Venezuelan government has chosen to render voting as an instrument of the masses, ensuring full, unfettered participation and a democratic outcome.

The PSUV has proven that the political education and organization of people wins and the baseless foreign fabricated leaders like Juan Guaido, appointed by foreign governments, are finished

The faithful members of the PSUV (Socialist Party of Venezuela) who understood this process came out to deliver 69 percent of the vote to the party that has led the socialist economic process that has changed their lives both economically and socially for the last 20 years during the recent parliamentary elections held in December 2020.  They have attained 253 of 277 seats and the closes contender the Democratic Alliance holds 18 seats.  The Communist Party of Venezuela also won a seat. The PSUV and the Venezuelan masses have courageously pushed against attempted “Coups”, foreign invasions, and economic blockades initiated, financed and organized by Imperialist countries in North America and Europe. But more importantly the PSUV’s democracy is rooted in the participation of the people in the political and economic process. The PSUV and Venezuelan people started from the beginning with the Bolivarian circle process. The studying of Constitution by the Venezuelan people led to its revolutionary reshaping. The inclusion of Indigenous and African descendent populations in the process built a more participatory democracy and finally the using of oil revenues in the reduction of poverty, the building of millions of housing units and Venezuela’s reaching out to its underprivileged neighbors in the Americas shows a deeper understanding of a global people’s democratic process. It is in this context that we must understand this election. In the face of a United States economic blockade, Covid-19 and political threats from the U.S. (boasting the largest military force in the world), that the victory of the PSUV vote in Venezuela is so special. The PSUV has proven that the political education and organization of people wins and the baseless foreign fabricated leaders like Juan Guaido, appointed by foreign governments, are finished.

Historically, the election process in settler-colonies was a tool of white supremacy and open suppression of the human rights of Afro-descendants, Indigenous, Women and the working class. Today, Venezuela is part of the peoples’ democratic process to de-colonize the vote in the western hemisphere. By comparison, the capitalist ruling class in the U.S. stands as the leader in the process to continue to suppress the peoples’ right to vote and choose their leadership. The U.S. Electoral College an inherently undemocratic process built into the U.S. elections is a stark example of their elitist anti-people character. It is a process wherein the majority vote, the popular vote of the people can effectively be overturned by a small handful of just 538 electors who meet to determine the outcome of the presidential election. It is also a process that prevents the emergence of alternative political parties. The votes Donald Trump wants to throw out are largely in urban centers where people of color reside. He wants to subvert the will of the people. On the other side of the struggle the Venezuelan people have expanded the electoral process in a way that allows for the indigenous population to elect three members to the assembly and smaller parties to get a more critical share of the vote. There are now 277 seats up from 165 seats previously.

The interference in elections in the developing counties in the global south is part of the neocolonial and settler-colonial agenda. The Contradiction is rife. The illegal coups from Chile to Honduras were recognized by the U.S. but the presidential elections in Bolivia (won by Evo Morales and the MAS party) and Venezuela (won by Nicolas Maduro of the PSUV) were not. The European Union, United States and Canada have a different notion of democracy, as they have done everything to undermine the vote in Venezuela. These Capitalist and imperialist governments refuse to send observers to Venezuela. Yet it is U.S. chaotic elections that have been exposed globally as ones needing to be observed.

The campaigning and harassment at voting sites is forbidden. Observers were advised and directed to wear neutral colors. We were not allowed to wear campaign materials of any kind. The media was not allowed to publish results before polls closed and the official counts came

The Observation of Clean and Fair Elections in Venezuela

We could go on and on about the sterling open and honest election process in Venezuela which by the way is not new, even former U.S. President Carter and the Carter Center gave testimony to this decades ago. We could rave about the advances that have been added most recently to update the election process with the latest technologies, and methodologies. The system has a robust auditing system starting prior to the voting process and continuing after. There is an inspection of voting machines and they are set-up onsite, which I personally witnessed as an observer.

The campaigning and harassment at voting sites is forbidden. Observers were advised and directed to wear neutral colors. We were not allowed to wear campaign materials of any kind. The media was not allowed to publish results before polls closed and the official counts came. Observers stayed up deep into the night or woke early in the morning before any results were announced.

This process of being an observer began prior to the elections with seminars held not by political parties but by the Election Commission. They gave a history of the election process. They explained how the voting hardware worked and the methodology of auditing the vote with all its checks and balances. The Commission explained their bio-scan technology which doesn’t allow for a person to cheat.

The observers were taking to sites during the polling process and witnessed the process in action. The African delegation as all other delegations and independent observers proclaimed their confirmation of a clean and fair election. We were proud to part of the process.