You are here: Home / Feature Story / The People (and the Revolution) Still Live in Zimbabwe 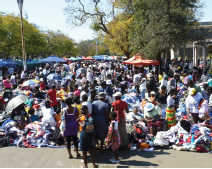 “…life and culture is flourishing in Zimbabwe, despite over ten years of US and UK sanctions on Zimbabwe and many of its leading citizens“

With an intersection with such a name as Fifth Ave and Fife Street, I was curious as to what was there. I drove by and realized this was part of the three block long street market I visited back in 2003.  That year, I wrote a short article and included a picture of myself standing in front of the market.  As then, it is still a very vibrant market, with street vendors, mainly women, selling a variety of fruits and vegetables. Food was plentiful, grown on local farms. As in 2003, ten years later, this smashes the lie that farming has failed due to the fast track land transfer process that gave land to over 300,000 new African farmers in Zimbabwe.  The lie that people in Zimbabwe are starving continues even today in much of the western press.  Living here in Bulawayo, Zimbabwe, I can tell you that the people are not starving. Instead, life and culture is flourishing in Zimbabwe, despite over ten years of US and UK sanctions on Zimbabwe and many of its leading citizens.

These sanctions on Zimbabwe are coordinated by what I call “Britain and her political and ideological children (Canada, Australia, USA and New Zealand)”. Despite the unity government formed five years ago and the call by all major parties in Zimbabwe to end the racist, imperialist sanctions, U.S. President Obama has refused to do so. These sanctions were the major causes of hyperinflation in Zimbabwe which caused so much havoc. To end the hyperinflation, in 2009, Zimbabwe dollarized. This means all transactions now use the US dollar or South African Rand.  This is humbling for any country. It shows the strength and power of imperialism. The tactic to dollarize has helped to stabilize the economy. While this means, Zimbabwe does not print its own currency, it therefore cannot run a deficit. Such irony, as the USA sits stalemated on so much deficit and debt.

This past April, Bulawayo hosted the 54th annual Zimbabwe International Trade Fair (ZITF).  There were 656 exhibitors that occupied 49,000 square meters of space. Most exhibits were from Zimbabwe, including several from my university, the National University of Science and Technology (NUST).  However, international exhibits came from Botswana, Brazil, China, Ethiopia, Germany, Indonesia, Italy, Kenya, Malawi, Mozambique, Namibia, Pakistan, Poland, South Africa, Tanzania and Zambia. The main invited speaker at the ZITF was Dr. Joyce Banda, President of Malawi.  Sunday News Reporter, Sanford Chiwanga reported on Dr. Banda’s “declaration that she would replicate Zimbabwe’s land reform and indigenization programme and her call for the West to lift the illegal sanctions imposed on Zimbabwe”.

I live in university owned apartments on the corner of 1st Ave and Jason Moyo.  Jason Moyo was a hero during the liberation struggle. Many of the streets are named after heroes in the struggle. Two blocks east of Jason Moyo Street is a major street named after President Mugabe. In driving to Harare, the capital of Zimbabwe, the main road becomes Samora Machel Avenue.  A major downtown Harare street is named after Nelson Mandela. It is refreshing to travel in a country where you see the streets, plazas and buildings named after African revolutionaries.

In my talk I pointed out how the news media reporting is dominated by four major news agencies: Reuters, Agence France- Presse, United Press International and the Associated Press (based in France, Britain and the USA) along with the international cable news networks, CNN and BBC.  Voice of America (VOA) dominates the radio airways of Africa broadcasting on 25 frequencies in every corner of Africa. They have three frequencies devoted especially to the Sudan and four frequencies devoted especially to Zimbabwe. They broadcast in all major African languages. In Zimbabwe they broadcast in English, Shona and Ndebele. VOA is controlled by the USA government and has a clear agenda – promote USA interest and denigrate and rally support against anything standing in opposition to those interests. I pointed out that all the major capitalist media is controlled by a handful of wealthy, powerful individuals (Capitalists) who intend to use the media to present stories which help them maintain power and increase their wealth. In order to better understand what the media does, who controls the media and what we must do, I told the students we must engage in serious political education and train ourselves as activists. I indicated that the All-African People’s Revolutionary Party is doing this through our Political Education Work-study circle program.

During the Q&A, one young lady indicated she was surprised that I considered myself an African.  This led to a lively exchange about African Identity and allegiance to Africa. One of the speakers insisted that identity is not predetermined and that we must define our identity based on our self-interest. I referred the young lady to Nkrumah’s writings on African culture, personality and identity and pointed out that the position that all people of African descent living outside Africa were African and belonged to the African nation served to strengthen the forces for Africa.

I had been invited to speak by one of the lecturers in the English and Communications department who attended the African Liberation Day I helped organize and spoke at in Gweru last year. It was good to return to Gweru and even better to hear and see young students and lecturers who clearly will be part of the Revolutionary African Intelligentsia.