You are here: Home / Feature Story / The Militarization of Africa 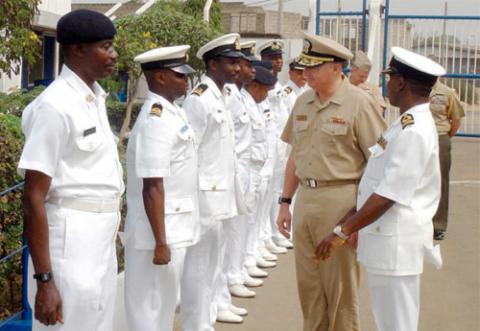 In the quest for land, resources and cheap labor, imperialism’s 21st century scramble for Africa is leaving a path of misery, death and destruction through every corner of Africa. Initially, it appeared that coup d’état followed smoldering issues such as dissatisfaction with the government’s handling of a secessionist insurrection by Tuareg tribes in the north, and also soldiers’ complaints about pay, supplies, and inadequate compensation for widows of soldiers.

But there is clearly more at play here than a band of disgruntled soldiers, because the coup was actually led by a relatively low ranking captain named Amadou Haya Sanogo. Sanogo has visited the U.S. on numerous occasions, to participate in the International Military Education and Training program, sponsored by the U.S. State Department. Also, with elections only weeks away, the people of Mali would have had an opportunity to express any grievances at the polls. In this case, the insurrection in the north was used as a pretext to overthrow a legitimately elected government. Throughout Africa and the world, the United States has been responsible for the forced removal of democratically elected leaders on numerous documented occasions, with over 50 occurrences on the African Continent alone. Nevertheless, U.S. citizens rarely question the “right” of the U.S. to engage in “regime change” whenever and wherever it sees fit.

Why do coups happen? It’s easy to be misled. In his book, “Class Struggle in Africa,” Nkrumah noted that:

“All manner of reasons have been given by bourgeois observers to explain the causes of the succession of coups which have taken place in Africa in recent years. In some cases, coups have been attributed to tribalism and regionalism. Others are said to have occurred because of the disgust of elements among the armed forces and police with the ineptitude and corruption of politicians and the ‘economic chaos’ they have caused. Not one of these explanations accords with the true facts.”

Nkrumah goes on to provide an explanation that still holds true. He said:

“At present, there is in Africa an intensification of struggles and conflicts between imperialism and its class allies on the one hand, and the vast mass of the African peoples on the other. Imperialist aggression has expressed itself not only in coups d’état, but in the assassination of revolutionary leaders and the setting up of new intelligence organizations.”

Imperialist intelligence organizations have been known to coerce or co-opt individuals in African militaries. These unwitting (or sometimes knowing) dupes have accepted imperialist money, arms and advice and they have proceeded to dislodge African leaders who have enjoyed the support of the masses. In the midst of the ensuing chaos, imperialists set to work gaining and securing the country’s wealth.

There is only one way to maintain imperialism, and that is by force. From the 1961 torture and assassination of Patrice Lumumba of the Congo to the violent overthrow and murder of Libya’s Colonel Muammar Gaddafi in 2011, the U.S. along with its western European allies and the support of the United Nations have historically been heavily involved in coups in Africa.

Coups are a destabilizing force, usually sparked, financed and armed by external forces. These external forces benefit from keeping Africa in a state of perpetual instability. When a government in Africa falls to a coup, the civil institutions, the media, the constitutional government, the judicial system, and the financial structure are all compromised if not destroyed. What remains constant are numerous de facto, government-like structures from outside of Africa, including the powerful multi-national corporations (especially in the oil and mining industries); international financial institutions such as the World Bank and the International Monetary Fund (IMF); U.S. and European funded Non-Governmental Organizations (NGOs); and finally, the omnipresent U.S. military/NATO operations. To secure their dominance in the region, the United States established U.S. Africa Command (AFRICOM), which joins, CENTCOM in the Middle East, EUCOM in Europe, PACOM in the Pacific, and SOUTHCOM in Latin America. AFRICOM does not exist to protect or assist Africa, it exists to dominate and exploit Africa. Therefore, coup d’état will continue, under AFRICOM’s watchful eye and imperialism’s generous bankroll.

All foreign military bases, armies and mercenaries must be purged from Africa, and the people must be allowed to provide solutions to Africa’s civil conflicts. Africa must vigorously reject AFRICOM. The presence of foreign troops on African soil threatens Africans’ sovereignty and independence. The end of war in Africa will decrease violence against women and children who suffer the most from civil conflicts, through, displacement, kidnapping, and forced labor and rape. The end of military conflict in Africa will free up resources for fighting hunger, disease, and illiteracy. The end of military conflicts in Africa will allow uninterrupted economic development and a new era without external interference. It will diminish the cycle of dependency, allowing Africa to solve its own problems.

What is the Solution?

So why should you care about events in Guinea Bissau, or Mali, or Africa in general? You should be concerned because when outside forces collaborate to redirect Africa’s natural resources and wealth away from Africa and to Europe and the United States, those resources are not available for the development and prosperity of Africa and African People. It is not just Africa’s resources that are misdirected. Africans in the U.S. watch billions of their tax dollars go toward military spending every year when that money could be used instead to eliminate homelessness, and to provide cradle to grave health care, quality public education, employment and to satisfy other vital human needs. Instead, our hard-earned dollars and Euros are funding AFRICOM and coups in Africa that impede efforts to make the African World independent and self-sufficient.

The All-African People’s Revolutionary Party is working hard to bring liberation, unity and socialism to Africa. In a truly, liberated, united, socialist Africa, there will be no tolerance for either external or internal forces that cause destabilization. A liberated Africa will use its vast resources for its own economic development. You can be part of the solution by joining an organization that is fighting for Africa’s liberation. Get involved. Join the All-African People’s Revolutionary Party, or any organization fighting for Africa’s total liberation and unification.

For more information on coup d’ états in Africa, read Imperialism Uses Coups to Rob and Destabilize Africa. The following recommended reading provides a foundation for understanding the current reality in Africa.

For more information on coups d’état sponsored by the U.S. and other foreign powers, see: