You are here: Home / Feature Story / The Chickens Come Home to Roost (Again): The Violence of Right-Wing Oppression 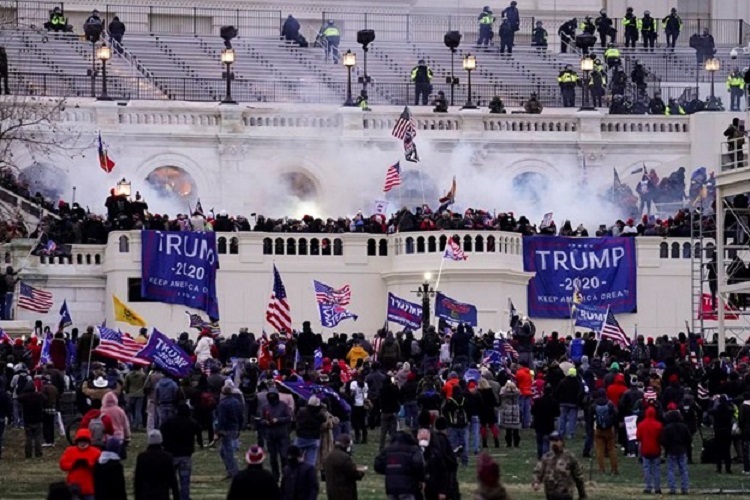 White supremacist violence is as American as apple pie. The U.S. capitalist system is built on it. If you don’t believe it, ask the indigenous people, (Navaho, Creek, Sioux, Mohawk, Seminole etc.), who were enslaved and murdered for their land. Ask African people, (Wolof, Mandinka, Fula, Angolans, Kikuyu etc.) who were kidnapped, enslaved and brutalized in the United States. Thus, the violence we saw on January 6 th where “Red, White and Blue” racist “patriots” died, was simply what Omowale (Malcolm X) characterized as the “Chickens Coming Home to Roost.”

Inside of the Capitol building that the mob invaded, there was a different kind of “white-on-white” violence going on. Neo-Fascist Republicans went toe-to-toe with Neo-liberal Democrats. Both forces are committed to capitalist oppression and imperialist exploitation, but a new civil war began to unfold between these two capitalist factions. While fascist ideology is growing in this country progressives and people of color are trapped inside these two racist parties. These capitalist parties are largely funded by a corporate elite and do not represent the working class. They never did. Republicans and Democrats help corporations make trillions from the exploitation of the masses’ labor, including the white working class. This elite class controls the bulk of capital and the means to make capital (banks, insurance companies, big agri-business, arms manufacturers, car and tech companies). This class also works hand in hand with Republican and Democratic leaders and the U.S. military to wage resource wars by overthrowing legitimate governments that do not place their nations’ oil, minerals and other resources at the disposal of the U.S. led capitalist class. The Democratic and Republican parties fund, create and collaborate with right and far right governments, fascist militaries and paramilitaries around the world to achieve these goals. Their power and money are dripping in blood.

In fact, every-time this thieving capitalist one percent loses money on the stock market the Democratic and Republican parties collaborate to give it back to them out of the people’s taxes. When the 2008 housing bubble burst the banks were given more than 12 trillion dollars as the working classes faced record foreclosures and loss of their homes. The latest 2 trillion-dollar Coronavirus stimulus gives the working person 600 dollars and 500 billion dollars to the rich corporations. These losses in income and resources of the white-working class are blamed on the so-called immigrants and people of color and not the capitalist class, where it rightly belongs. This is what fuels this fascist behavior.

“U.S. imperialism posed as being anti-fascist, but it was U.S. imperialism which had helped put Nazism in power. Henry Ford was an important early backer of Hitler, and by 1924 had started pouring money into the tiny Nazi party. Ford’s portrait hung on the wall in Hitler’s Party office. Every birthday until World War II Ford had sent Hitler his personal greetings (and a gift of money). Even during the War the Ford Motor Company delivered vital parts to the German Army through neutral Switzerland. On October 20, 1942, the U.S. Embassy in London complained to Washington that Ford was using his plants in Switzerland to repair 2,000 German Army trucks. Ford was just one example out of many. GM President William Knudson told a press conference on October 6, 1933, that Nazism was “the miracle of the 20th century.” GM in Germany contributed Vi of 1% out of all its employees’ wages as a weekly mass donation to the Nazi Party.”  Settlers: Myth of a White Proletariat

Remember Fascism is just an extreme “national supremist form of capitalism”. Fascism is driven by a portion of Capitalist Corporate elite who use backward notions of nationalism and race to advance empire domestically and internationally. In the thirties people like Henry Ford praised the rise of Hitler and his oppression of non-German ethnic groups. Today major capitalist like the Koch brothers and others have encouraged Trump and profited off of the rise of fascism in the United States. These fascist ‘white militias’ are mere cannon fodder for the benefiters of capitalism.

These fascist and white supremist groups are soldiers killing and terrorizing people of color to keep their position in the imperialist hierarchy. They are wearing the “uniforms of brutality” both inside the government (police, army, national guard, FBI, CIA etc.) and outside (militias, KKK, Neo-Nazis, Corporate spies and armies etc.). These are the violent oppressive forces of capitalism and imperialism. Yet, when Africans, Indigenous, Latino and anti-fascist forces rise up against oppression, we are met with excessive force, military weapons, mass arrests, injury and death. By contrast, the armed terrorists who stormed the US Capital, holding members of congress hostage, were allowed to simply return to their homes.

Fox News made 1.12 billion first quarter alone, while representing the blatant racist so-called patriotism of settler-occupation of “Europeans” in the Americas. The rest of the liberal Corporate media, thou still racist, sexist and deeply committed to capitalism do cover issues like Black Live’s Matter and Immigration issues in a “police state friendly” way. They jumped on the bandwagon of pro-women movements like “Me Too”, yet the corporate media endorses every U.S. or right-wing sponsored coups, attempted coups, invasions, drone strike, like in (Venezuela, Honduras, Bolivia, Palestine, Afghanistan, Sudan, Somalia, Libya, Ivory Coast, Yemen) no matter how violently racist. The murder of peasants, women, children and indigenous people in the streets does not bother them. If they cannot put a positive spin on U.S., European Union or Israeli terrorism they simply just don’t cover it. For example, corporate media hasn’t covered the right-wing murders of Colombian human rights workers who are majority indigenous, women and African. Could it be the corporate media is helping cover-up corporate theft of peasant’s land and resources?  U.S. corporate media is the mouthpiece of the global right wing from Israel’s Netanyahu to Venezuela’s Guido.

But today the chickens have come home to roost in the form of a right-wing insurrection, while the U.S. Government acts like they didn’t raise the bird. The same police, “boys in blue”, that Democrats and Republicans praise, didn’t protect them. The Congress got a taste of the right-wing forces that they have been producing and unleashing in other countries. Five died in the U.S. but millions have died by the U.S. imperialist bombs and the right wing “death squads” the U.S. has supported over the years. The lies the U.S. led Organization of American States told against the legitimate elections in Venezuela and Bolivia caused hundreds of deaths over the last 2 years alone. These are the same type of election lies President Trump and his followers told. These lies are right out of the CIA playbook. That’s why it seems so surreal.  The US continually attempts to discredit the legitimate elections in countries like Zimbabwe resulting in sanctions that cause the deaths of innocent people. This time, in his quest to hold on to power, Donald Trump’s lies resulted in the deaths of his own followers and supporters.

The All-African People’s Revolutionary Party (A-APRP) is fighting for One Unified Socialist Africa. The A-APRP coined this slogan “Smash the Democratic and Republican Parties” in the period when it became clear that there was little to no chance to reform the two racist capitalist parties who were oppressing the masses of people in the U.S. and killing scores of people in Vietnam. Now, it is even clearer that all (bourgeoise) and neo-colonial capitalist parties must be dismantled globally along with their killing machines; NATO, AFRICOM, neo-colonial and right-wing armies and the like. Join the A-APRP and help us build the campaign. If you are already involved in an organization join with us and the Black Alliance for Peace in the campaign against AFRICOM.