You are here: Home / Archives / The AAPRP stands up for the Jamahiriya and Against Imperialism in Africa 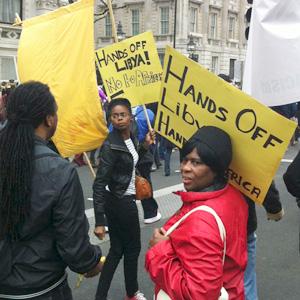 The All-African People’s Revolutionary Party, (A-APRP), has been involved in active revolutionary relations with the Jamahiriya of Libya for more than 40 years. We have defended and supported Libya historically whenever imperialist have attacked her, including unconditional political support, smashing illegal travel bans, smashing sanctions and military attacks, such as in 1986 and now we are intensifying our political work against the NATO imperialists bombings that began in March, preceded by mercenary military uprisings in February 2011.

Beginning in February 2011, we have been in the vanguard issuing democratic Political Statements on our official A-APRP website, including the pdf document “Libya is not Egypt and all Rebellions are not Revolutions” and sent to as many of our allies and brother-sister organizations as we could followed up by international interviews, in Africa, Europe, North America and the Caribbean on radios, TVs, newspapers and other social media.

Simultaneously, we have been in the forefront of mass marches, rallies, seminars in Africa and have participated in others. All of our African Liberation Day activities highlighted our political work against NATO imperialist bombings, and the arming of ground troop mercenaries, (based in Benghazi) while re-confirming our unequivocal support for the Jamahiriya, the Leader of the Revolution – Muammar Al Qadhafi and the People of Libya.

Find below links to images, pdf documents and videos of our initiatives in support of the Jamahiriya, the Leader of the Revolution – Muammar Al Qadhafi and the People of Libya.

Los Angeles, U.S. and London, U.K. Demonstrations Against Attacks on Libya – March/April 2011 Images from the demonstration.

Libya Program from the Shrine of the Black Madonna – July 24, 2011 – Atlanta, U.S. This Program was co-Hosted and co-Sponsored by the AAPRP. Link to Full Video Three hours.

Press Statement by the: US/NATO HANDS OFF LIBYA! HANDS OFF AFRICA! COALITION

Africa is at war! We are being attacked! Fight back! “…Either you concretely work for Mother Africa or by your inactions you are working against her…” (Kwame Ture)