You are here: Home / Feature Story / Take a Knee for the Destruction of the “Military Police Prison Industrial Complex” 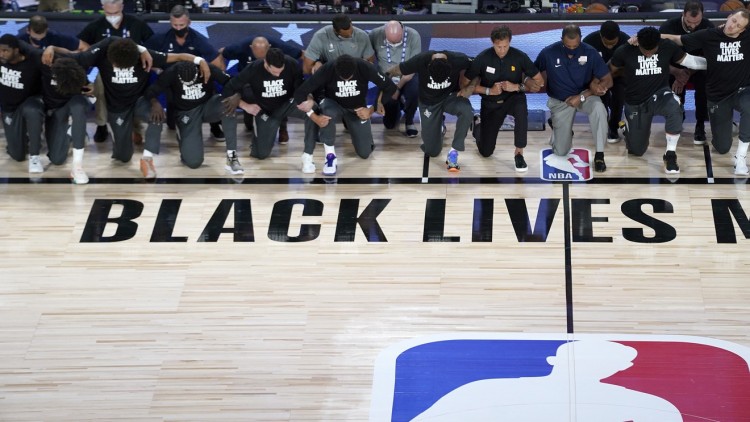 The All-African People’s Revolutionary Party (A-APRP) wants to make it perfectly clear we are not just taking a knee against police brutality. We are against the whole military/police/prison/industrial complex that is the genesis of the genocidal wars of settler-occupation and imperial wars across the planet. The toppling of racist statues and the fight back against federal troops in Portland, Oregon shows the picture is becoming clearer to the masses of African and Indigenous peoples that there is no real difference between the racist settler-colonial patriarchal nature of Cecil Rhodes, Christopher Columbus, George Washington, Robert E. Lee, Theodore Herzl and the murderous settler police forces from the U.S. to Palestine. The U.S. military is an occupying force, occupying the whole of the indigenous lands in the Western Hemisphere (known by the indigenous people as Turtle Island) with bases scattered throughout the western hemisphere. Led by the Southern Strategic Command (SOUTHCOM) which includes navy, army, air-force and tactical nuclear weapons there are around 76 U.S. bases in the Caribbean, Central and South America. Their mission is to smash dissent, rebellion and revolution against capitalism and settler-imperialist control in the region. Just like the police occupy the neighborhoods of people of color in the U.S.; the U.S. military occupies this hemisphere and most of the globe.  And just like in our neighborhoods, the military also trains a neo-colonial elite of token Africans, Latinos and Asians to help them continue their worldwide, capitalist, white supremacist domination.  The U.S. has occupied and invaded Haiti, Cuba, Panama, Colombia, Grenada and blockades Cuba and Venezuela right now. They trained and supplied death squads in Nicaragua, Guatemala, Ecuador, El Salvador, Bolivia and Honduras. They assassinated Allende in Chile. The U.S. troops killed on estimated 4000 Africans in the invasion of Panama in 1989 and between the “Dirty Wars” of Reagan’s and Bush’s administrations killed over a hundred thousand indigenous people in Central and South America.

The number of African, Indigenous and Asian soldiers, police officers and inner-city mayors hired to suppress our rebellions is directly tied to our level of resistance against the settler-class. Rather than improving the material conditions that we face as a people, our legitimate acts of resistance are “rewarded” by putting more African police chiefs and military officers in our midst, without uprooting the oppressive power structure. These men and women are then used to arrest and control us, acting as agents of the system that put them in place and not in the interest of the oppressed communities from where they came. Every successful rebellion we get police chiefs like (acting Police in Portland Chuck Lovell) and army officers like (former Secretary of State General Colon Powell) they look like us, but the white settler power structure stays the same. In 2016 only the most courageous athletes took a knee with Colin Kaepernick and the WNBA (Woman’s National Basketball Association). Now members of congress and the whole NBA can’t stop kneeling. But we have to be clear between those kneeling with us and those kneeling because of us. The leaders of the settler-regime we call the government, the corporate sponsors of the NBA and majority of the NBA owners are not kneeling with us, they are kneeling because of us. They are kneeling to continue to keep us contributing to their financial future; keep us buying NBA jerseys, drinking Budweiser and wearing Nikes while capitalism’s foot stays on our necks.  Those sincere athletes and coaches have to catch-up with the people.

The number of African, Indigenous and Asian soldiers, police officers and inner-city mayors hired to suppress our rebellions is directly tied to our level of resistance against the settler-class. Rather than improving the material conditions that we face as a people, our legitimate acts of resistance are “rewarded” by putting more African police chiefs and military officers in our midst, without uprooting the oppressive power structure

As we said earlier many protesters today are saying there was slavery, colonization, racist and classist genocidal butchery before there was a confederate flag. These murders of Africans and Indigenous people carried out by the U.S. cavalry led by people like Andrew Jackson preceded the civil war. Those who say that there are kneeling against police brutality and not the U.S. military have to be completely uninformed about the military/police/prison/industrial complex.

As we have said the same armies that occupy Indigenous land, enslaved and murdered us in the U.S. have invaded and colonized people globally including countless military operations in Africa. With their NATO forces, former Apartheid South African and current Zionist Israeli allies they murdered literally millions of our people. When we fight for national liberation in Africa, they are against us. We can see the hideous and callous disregard for African life precisely by following Africans in the U.S. military.  After Africans turned around the civil war and freed ourselves, the U.S. military abandoned us during Reconstruction and let white supremacist raw naked terrorist rule in the Southern U.S. where the majority of Africans in the country lived.

In Vietnam, Africans were used as cannon fodder making up 30% of the frontline, more than twice our percentage of the overall population. And after every war (Afghanistan, Iraq, Libya, Syria etc.), the African, Indigenous and Latino soldier returns to the same level of racist violence and contempt they just helped heap on some other oppressed people.

The whole so-called security apparatus in the U.S. is linked together with one common goal; the maintenance of white settler domination in the U.S. and the perpetuation of capitalism and imperialism world-wide. The U.S. spends over a trillion dollars on its military/police/prison/industrial complex that funds the corporate arms dealers (Lockheed Martin, Boeing, Raytheon, etc.).

The call for the defunding of the police needs to be saying defund the police, U.S. military and the fascist security state and it’s more than 800 occupying military bases from Puerto Rico to the Philippines from Djibouti to South Korea

The U.S. with more than 2 million prisoners and countless security forces (police, prison guards, border patrol, immigration officers etc.) spends annually 180 billion on prisons and 100 billion on police more than any other country in the world. The call for the defunding of the police needs to be saying defund the police, U.S. military and the fascist security state and it’s more than 800 occupying military bases from Puerto Rico to the Philippines from Djibouti to South Korea. The African youth of the 60’s in the U.S. led the anti-war movement with the slogan “Hell No We Won’t Go” and help smash the draft. The smashing of the military/police/prison/industrial complex will take more than mass mobilization. This is going to require mass organization across the globe with our sisters and brothers who are already in the streets demonstrating their willingness to take on this challenge. The A-APRP stands ready to help build that movement.