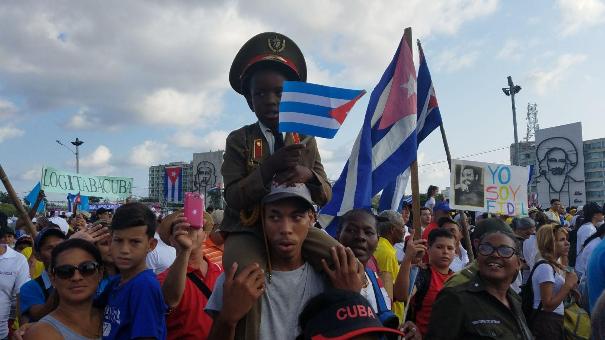 May Day Celebrations in Havana Cuba

There were a number of student activist engagements in Azania (South Africa) from 2015 through 2017 that shut down college campuses. The result was a government plan that promises free education for the children of poor and working class families.  Like most concessions, this comes with restrictions and can be rescinded at any time.  More important was that the student activists established solidarity with workers.

While calling for free education, the student movement also called for a living wage for workers and an end to outsourcing.  Most of the campus jobs from maintenance to security had been outsourced to companies that were notorious for exploiting workers with no benefits, minimal wages and no job security.  The university found it more profitable to outsource than hire directly.  They justified this indirect exploitation on the fact that their primary responsibility was education.  According to the university administration, jobs not directly involving education should be handled by other agencies.

The students realized this was an excuse for the university to wash its hands of the exploitation occurring on the campus.  The students saw all workers as part of the university family and they used their organizing power to support the workers’ cause.  The enlightenment of the student activists went beyond the campus.  They called for an end of outsourcing on the part of all of the state-owned and state-run enterprises and demanded a living wage for all in the country.  Hence, student wars had become workers wars.

On another front, the ruling African National Congress (ANC) was pushed to develop a position in support of land reclamation.  This year the new president, in the State of the Nation Address had to announce the Party’s support for revisiting the Constitution to address land repossession without compensation.  In March of this year, 2018, the ANC supported the Economic Freedom Fighters’ call in Parliament for an organized effort to investigate land repossession without compensation.  These changes were the direct result of pressure from the workers.  Workers wars had become land wars.

The connections between these struggles have not been lost on conscious students. At a program commemorating Steven Biko a young militant wore a T-shirt that said: “Student wars are worker wars and worker wars are land wars.”

Land in particular is at the very core of liberation struggles in Africa. Available agricultural land declined by 4% over the past 23 years, from 97.03 million hectares to 93.25 million hectares.  Agricultural land has been taken over by mining, industry and the extension of municipal boundaries.  It is under these conditions that a growing anger among the people over land and wealth inequality must be understood.

For their part, European settlers in Azania have become increasingly anxious about the safety of white farmers. Their rhetoric includes charges of ‘white genocide’ and violence on the farms. However, the facts are quite different. The South African Police recorded an annual average of 59 farm murders between 2014 and 2017, in comparison to an annual average of 63 farm murders between 2010 and 2014. The high point was 2001-2, when 140 farm murders were recorded by the police.  These facts are particularly significant in light of Azania’s population growth from 45 million in 2000 to 56 million by the end of 2016.

Misinformation can be powerful. In the midst of these claims of ‘white genocide,’ Australia’s Home Affairs Minister Peter Dutton said he wanted to expedite visa applications for white South Africans, fearing for the safety of his fellow European settlers. The South African International Relations Minister Lindiwe Sisulu issued a demand for a retraction of the comments by Dutton. European settlers in Australia are nevertheless accelerating visas for fellow Europeans from Azania, and Israel offers immediate citizenship for European Jewish settlers.

The type of support offered by European settlers for their kith and kin is notably lacking in the African World. Africans who live outside of Africa and who endure racist violence and police terrorism cannot be certain they will receive sanctuary and refuge in Africa. There is no fast tracking of visas for Africans from Haiti despite the high level of poverty and exploitation caused by so-called humanitarian agencies. Africans from Somalia who endure violence and anarchy created by western military interventions do not receive automatic visas.

With proper organization, Africa has the potential to rescue and support Africans throughout the world. The spirit that led to the linkage of student struggles, worker struggles and land struggles must lead to a struggle for open borders, the right to return, and land reclamation. This will inevitably benefit the struggle for Pan-Africanism – the total liberation and unification of Africa under scientific socialism.