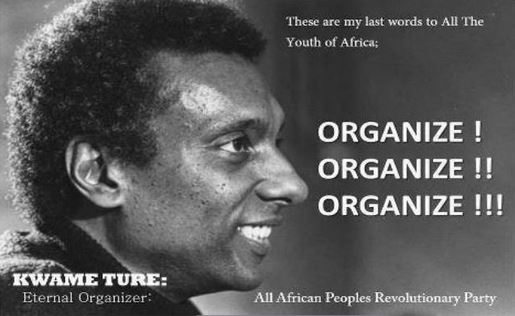 Kwame Ture’s continued impact on successive generations cannot be denied. Kwame Ture formerly known as Stokely Carmichael personified African people’s struggle for freedom and justice for three and half decades with uncompromising vigor, clarity, and principle. Kwame Ture is still organizing for the African and global revolution. Kwame Ture’s presence on social media is iconic.  Kwame Ture was/is not a static force. Kwame Ture’s actions and understanding grew and grew and grew from the Student Nonviolent Coordinating Committee (SNCC) to the All-African People’s Revolutionary Party (A-APRP). Although Kwame Ture (KT) made significant contributions to the Civil Rights and the Black Power Movements, perhaps the most notable political contribution that KT made was in the international arena against imperialism, starting with opposing the US war against Vietnam and meeting with Ho Chi Minh. Kwame Ture became a supporter of the Palestinian cause, and a lifetime fighter against Zionism. Kwame Ture’s anti-imperialist work took him to Africa to work with Kwame Nkrumah and Sekou Touré, the two revolutionary giants who influenced his revolutionary thinking and work as a Pan-Africanist from 1967 onward.

Kwame Ture became a member of the first circle of the A-APRP in 1968. As an organizer in the A-APRP Kwame Ture met and worked with freedom fighters all over the world from Guinea Bissau to Grenada. KT worked with the African Party for the Liberation Guinea and Cape Verde (PAIGC), Pan-Africanist Congress of Azania (PAC), African National Congress (ANC), Azanian People’s Organization (AZAPO), The Libyan Jamahiriya, Zimbabwe African National Union Patriotic Front (ZANU-PF), the People’s National Party (PNP) Jamaica, New Jewel Movement Grenada, Cuban Communist Party, Baath Party Syria and Iraq. KT worked with Shirley Graham DuBois, Queen Mother Moore, Madame Hadja Andree Touré, Thomas Sankara, Fidel Castro, Maurice Bishop, Yasir Arafat, Wabun-Inini AKA Vernon Bellecourt and many, many more. Kwame Ture participated in the American Indian Movement’s takeover of the Bureau of Indian Affairs in 1972 and continued organizing against settler-occupation in the Americas throughout the remainder of his life.

Kwame Ture was a dynamic, passionate, and knowledgeable speaker whose words continue to resonate; endearing people to him even on YouTube videos today. But more than anything, Kwame Ture was a ceaseless organizer. The most repeated phrase in Kwame Ture’s speeches in the 80s and 90’s was “organize, organize, organize”. The concept and living example of organization is the biggest legacy Kwame Ture gave us. KT was a product of organization. Kwame Ture didn’t invent the slogan “Black Power” in the summer of 1966 by himself somewhere in the middle of Mississippi. SNCC members planned and organized this slogan, Mukassa DaDa AKA Willie Ricks and other SNCC members prepared the people for the launch of this slogan and campaign. SNCC member Ethel Minor wrote the article in support of Palestine that sparked the discussion of the 1967 Israeli war of aggression on Egypt inside SNCC and the beginning of KT’s endless work researching, speaking, and organizing against Zionism.

The 1966 murder of 21-year-old student activist and Navy Veteran Sammy Young Jr. for using the “White only” restroom in Alabama, led to SNCC’s Anti-War position and the slogan “Hell No We Won’t Go”.  Kwame Ture’s election as the chairman of SNCC in 1966 represented an ideological shift in SNCC, a more radical shift from the thinking represented by John Lewis who still believed in non-violence as a principle and that the system of “White Supremacy” could be fixed through voting for Democrats or Republicans. SNCC’s shift was long in the making; influenced by the thinking of Malcolm X as well as their lived experience of armed self-defense against the Ku Klux Klan, the racist police and White Citizen’s Councils. Many SNCC members were armed leading up to 1966 and helping to organize African communities against White racist terrorist attacks in the South. These examples show how SNCC’s growing anti-imperialist, revolutionary nationalist, and anti-patriarchal thought helped to shift the civil rights movement, sending fears throughout their liberal support base. Bill Clinton’s audacity to exploit the funeral of John Lewis to attack Kwame Ture shows that imperialism still fears the power of the more militant ideas of SNCC as exemplified by Kwame Ture. [see Bill Clinton Throws Shade On Kwame Ture (Stokely Carmichael) and Black Power]

The philosophy of SNCC was organization over mobilization. Kwame learned that well.  KT clearly understood that any charismatic leader can mobilize people, but it’s organization that systematically allows people to develop from generation to generation. Kwame Nkrumah said:  “…In the final analysis organization decides everything”, and Kwame Ture helped to teach us that the objective of A-APRP is to produce a cadre of organizers and that genuine power comes only from the organized masses. Therefore, our ultimate task is to build an organization capable of defeating imperialism. As a revolutionary Pan-Africanist, Kwame Ture was clear that the core of the African Revolution is in Africa.  But, KT while organizing in the A-APRP, would never forget his organizing roots in the Americas.  KT continued to connect to comrades from AIM, SNCC, the Black Panthers and Nation of Islam. KT’s work would lead to a front of Nationalist Organizations in America. KT made ongoing attempts to build an African United Front of Organizations in the US and helped in the creation of a World-Wide African Anti-Zionist Front. Kwame organized for the A-APRP throughout the Caribbean, Central and South America. Kwame Ture organized in Canada, Europe and Asia. Kwame Ture would serve as a link to African and revolutionary organizations across the globe.

Kwame Ture is properly buried in Africa the true home of all African people. But, KT belongs to Africa, Africans and the World-Wide Socialist Revolution, and his work will continue to organize. Today, as we honor the life and the legacy of Kwame Ture, we are reminded that humility was his greatness. There is only one thing he asked from us in honor of his memory: Organize, Organize, Organize. Join an organization working for the people.

How to Join the All-African People’s Revolutionary Party