You are here: Home / Press Releases / How to Get that Knee Off Our Necks…Organize for Power! 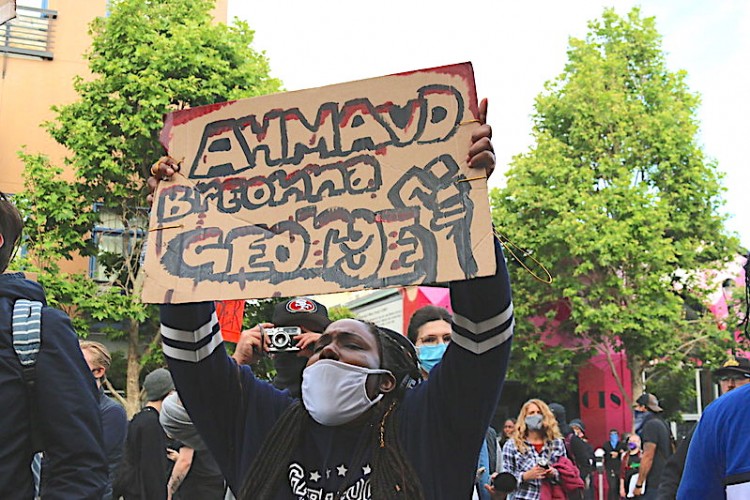 The All-African People’s Revolutionary Party (A-APRP) applauds righteous rebellion that was sparked after the public murder of George Floyd in the U.S. These police murders of African people quite rightly have sparked an international outcry from justice loving people everywhere. These rebellions and demonstrations remind us for the moment that we the people have power and are the majority.  Yet this systematic murder of Africans happens every day. According to the 2012 Malcolm X Grassroots Movement report, every 28 hours an African (person of African descent) is killed by the police, security agent or other branch of imperialist law enforcement. These figures only represent the U.S. The problem of police, military, death squads, and right-wing militias murdering of African and oppressed people is a global problem and the solution must be global. This solution must be permanent revolutionary Pan-African organization for the total liberation and unification of Africa under scientific socialism, and the destruction of the racist, patriarchal capitalist system that is the genesis of our oppression everywhere.

The murder of Africans and indigenous people is going on in Brazil, Colombia, Honduras, and Bolivia every day.  The Coronavirus pandemic is sadly exposing murder and beatings throughout Africa by neo-colonial police forces. As we are writing, police death squads are being released on poor communities in Haiti. We are murdered by neo-fascist groups in Europe and the agents of ‘white supremacy’ world-wide.  The murder of Africans and oppressed people across the globe is not simply a question of ‘white supremacy’. This is not simply a question of white hatred. The fact that these racist, fascist, patriarchal and homophobic murderers kill with impunity is a question of power. Kwame Ture once said: “If a white man wants to lynch me that’s his problem. If a white man has the power to lynch me that’s my problem.” This is our problem. Capitalist settler-regimes and their neo-colonial partners have the power to lynch us. The European settler-class built a military/police/prison/industrial complex grown out of their genocidal theft of indigenous people’s land and the brutal enslavement of African people. All the institutions we are appealing to, the U.S. courts, the Federal Bureau of Investigation (FBI), the settler-government and their neo-colonial partners globally,  are institutions created to protect white supremacy, the interests of the European settler-class and capitalism in general. White supremacy and the concept of whiteness are products of  land theft and imperialist colonial occupations in Africa, the Americas and Asia. The British, French, Spanish and Portuguese killed, waged war against and colonized each other before their invasion of other lands—there was no collective white identity. Imperialism’s need to occupy land and exploit our labor is the child of capitalism. White supremacy is a weapon and tool of capitalism and imperialism.

Every time Africans and the oppressed rebel against property and institutions of capital they get the harshest response, but they also get the most reforms. In fact, for every advancement Africans and oppressed people made against capitalism and imperialism, we shed our blood—from the colony to the plantation, in mass rebellion. The system of capitalism is most concerned with profit. There are serious problems with rebellions that fight for reform: 1) Even when they win the battle, the power is still in the hands of the capitalist institutions. The world rebels and they promise to do better, arrest the killer cop. If the rebellion is big enough, they might even sacrifice the racist cop/cops. The rebellion is over. 2) The majority of people who participated in the rebellion are not in any permanent organization working for the people.  When the rebellion is over they disperse.  3) In the reformist rebellion, the masses’ power is led by unity of action against the injustice (e.g. police brutality) but not unity of thought about what we are fighting for (e.g. revolutionary change from capitalism to socialism.)

The A-APRP supports the people’s rebellion. In fact, we support the ultimate rebellion—REVOLUTION! But we are also clear that there is a qualitative difference between a rebellion and a revolution. A revolution does not only rebel against the system’s injustices but seeks to take power and replace them with a just system. Revolution and even sustained resistance of any kind requires organization. The masses of African people must be organized and working everyday for their liberation. We must have consistent political education to clarify the nature of our oppression and to define our objectives and solutions.

The A-APRP is a permanent, revolutionary, Pan-African political party that politically educates and organizes our people globally. The A-APRP knows that the coalition to end the military/police/prison industrial complex must be built globally to stop the violent occupation of Africa by foreign imperialist armies like AFRICOM and NATO, and to end the militarized racist police occupation of neighborhoods of people of color globally. We must turn these international solidarity actions into permanent organization of our people.

Join an organization for your people—Join the A-APRP!