You are here: Home / Feature Story / Why We Stand in Solidarity with Standing Rock 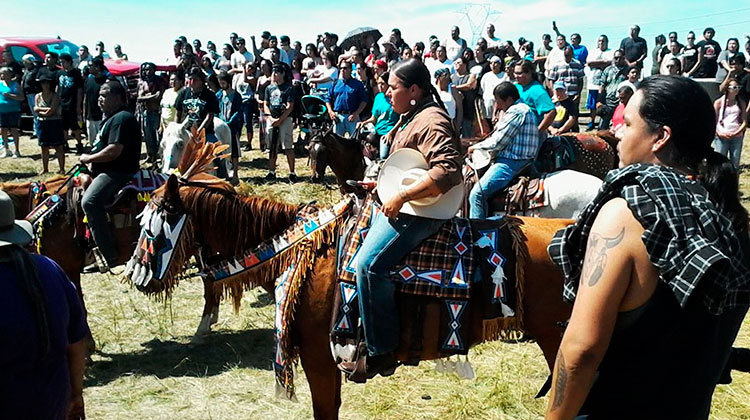 The All-African People’s Revolutionary Party (A-APRP) expresses strong and uncompromising solidarity with our Indigenous family members and all peace loving people at Standing Rock in opposing the 1,200 mile capitalist oil pipeline that is being pushed for development through the Dakotas.  We especially call upon all African people to unite with our Indigenous communities in opposing this pipeline in whatever material ways that we can.

Currently, over 90 Indigenous Ethnic Groups (tribes), and thousands of people, are assembling at Standing Rock in North Dakota to form a human blockade against this oil pipeline.  Their reasons for opposing the capitalist pipeline are irrefutable.  The pipeline is the brainchild of the U.S. Army Corps of Engineers in conjunction with the state governments of the Dakotas and Illinois.  These entities have authorized a Texas Oil Company named Energy Transfer Partners to construct this pipeline at an estimated cost of $3.7 billion.  If completed, the pipeline will extend from the Dakotas to the Bakken region of Southern Illinois.  The oil company’s speculative plans are to pump 400,000 barrels of oil through the pipeline per day which is scheduled to run under the Missouri River.  Obviously, a rupture in the pipeline would generate a devastating environmental crisis that would last for decades.  The clear threat this pipeline poses to the integrity of the drinking water supply for millions of people in this geographic region cannot and will not be ignored by the over 90 tribes who are leading the protest against this disastrous idea.  Also, so-called U.S. federal laws require the government to consult affected Indigenous tribes before imposing any projects that could adversely impact tribal lands.  Since this proposed pipeline is a threat to tribal drinking waters and would run within a half mile of multiple reservations, it unquestionably falls within the parameters of consulting the impacted tribes.  Yet, in spite of this clear requirement, the federal permits and contracts to fast track this pipeline were approved before the affected tribes first became aware of the proposed idea a few years ago.  This is just another example of the capitalist system speaking with a forked tongue.

This struggle is all too familiar.

For the A-APRP, this struggle the Indigenous people of Standing Rock are faced with is all too familiar.  We say this because capitalism has perfected the exploitation of land and resources as it relates to robbing Africa.  We can point to the industries of diamonds, gold, rubber, oil, coltan, uranium, bauxite, etc., to illustrate how the capitalists will show and tell volumes of research to support and justify their greedy position in support of this type of project.   Of course, once the project is in force, and/or when problems occur, these capitalist entities never have an answer or solution for the devastation that their greed is causing.  And, this happens in Africa where there is typically no regulation and oversight, not even on the bourgeois level that exists within the U.S.  In fact, specific examples are found in Dutch Royal Shell (Shell Oil) and its oil drilling processes in the Niger Delta region of Nigeria.  Over the last 20 years, there have been countless safety breeches which have caused thousands to instantly lose their lives.  And those who die are the workers the capitalists brag will benefit from the “creation of jobs” they trumpet as the reason everyone should support their capitalist projects.  The environmental devastation from the oil, gold, diamond, coltan, bauxite, etc, industries in Africa are at the core of many of the problems that have developed in places like Sudan, Somalia, and Rwanda.  So, there’s no question in our minds that the track record of capitalist corporations and their interactions with Indigenous people show a history that matches up very well with the issues we see in Africa.  Therefore, we need no prodding in joining the Indigenous people in opposing this capitalist oil pipeline project.

Our other responsibility is to educate African people about this issue.

We also think it’s critically important that everyone follow and respect the lead of the Indigenous people in expressing their vision around this resistance.  Elder Dennis Banks – a co-founder of the American Indian Movement in 1968 – has been active at Standing Rock.  He is stressing that people remember that this resistance is being called for by those who identify as members of the Seven Fires Council.  This is the seven member group of Lakota, Western Dakota, and Eastern Dakota peoples who make up a significant portion of the group popularly known as the Great Sioux Nation.  It is those leaders who define this struggle and our responsibility is to support them in the ways they indicate are needed.  Our other responsibility is to educate African people about this issue and to encourage us to join organizations that are fighting against oppression.  And this education and subsequent organizational work must take place within the context of the U.S. being a settler colony that is/was stolen from the Indigenous peoples of the Western Hemisphere.  The Indigenous people are not partners with the U.S.  They are not neighbors.  They are subjugated and oppressed just like the African masses worldwide.  Just like the masses of working class Europeans, throughout the world, for that matter.  This pipeline is a another capitalist venture that subordinates the interests of the people to the profits of large multi-national corporations.  We are obligated to protect the integrity of our ancestors, our struggling peoples, and all of humanity, in opposing these capitalist projects and uniting with our Indigenous family to build a strong movement that will continuously push back hard against this backward system until it comes tumbling down.  The only way this will happen is if we become organized.  Our enemies are organized.  The multi-national corporate structure has systematized manipulating government structures to act in their interests.  We see this with the Standing Rock resistance in how the Energy Transfer Parters gained the full support of all the required government structures without input from the most impacted people.  This is organization and we cannot expect to defeat these people unless we are organized on an even higher level.  The people of Standing Rock and the masses of African people who are on the streets fighting against police terrorism are providing us the examples.  All we have to do is commit to make our contributions and freedom is right around the corner.