You are here: Home / Feature Story / Socialism in Africa or One Unified Socialist Africa: The 2-line struggle of the African Left 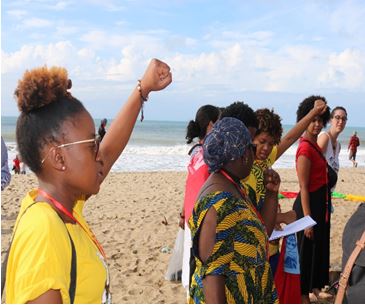 The Pan-Africanism Today (PAT) conference distinguished itself from the right opportunism of 7th PAC (hosted by the neo-colonialist forces in Uganda) and 8th PAC that made no ideological commitment to socialism or mass organizations like workers, women or youth. These conferences made no advancement from the 5th Pan-African Congress (the most decisive Pan-African Congress to date ideologically and organizationally). The PAT conference organizers clearly articulated their commitment to socialism and communism and captured a mass character with workers and social justice organizations. Where the PAT organizers fell short was on the question of Pan-Africanism. PAT failed to connect their conference to the 5th Pan-African Congress or build on the All African People’s Conference of 1958. The conveners fail to even mention in plenary sessions a definition of Pan-Africanism; neither 5th PAC’s “One Unified Socialist Africa” accepted by all Revolutionary Pan-Africanist organizations nor did they supply a sufficient ideological and organizational explanation of what is meant by “Pan-Africanism Today”. The theme “Unifying the Struggles of the Masses Against Capitalism and Imperialism” is left, socialist and internationalist but not necessarily Pan-Africanist. What was experienced by many veteran Pan-Africanist in attendance was a lingering struggle between two familiar political lines; Nkrumah’s, “political union conception” of one socialist continental government for Africa expressed by Nkrumah in “Class Struggle in Africa”, “Neocolonialism: The Last Stage of Imperialism”, and most decisively in the “Handbook of Revolutionary Warfare” on one hand, and on the other hand an African Unity political line of solidarity between workers in separate socialist states throughout Africa led by Marxist-Leninist parties exclusively. There are many contradictions arising from the separate socialist republic model including: 1) lack of clear commitment to African land and resource reclamation from settlers throughout the continent; like in Azania/South Africa; 2) lack of a policy for mutual protection and foreign policy on a continental scale; 3) no policy on one continental citizenship and destruction and colonial borders, 4) the problem of reducing scientific socialism a social-economic science to “Marxist Leninism” an ideology; dismissing other schools of revolutionary socialist thought in Africa and 5) Participating in bourgeois electoral politics as the sole revolutionary strategy of taking power in neo-colonial states. The conference organizers seem to attempt to white wash and neutralize the evolution and development of Pan-Africanism in general and ideological contributions of Kwame Nkrumah in particular.

One cannot install the history of Marxist-Leninism, Scientific-Socialism and Communism as the history of Pan-Africanism no more than you could reduce the Cuban Revolution to the history of the Cuban Communist Party. The history of Taino resistance and slave revolts like the one led Carlota are part of Cuba’s development and national identity. The great Jose Marti and Antonio Maceo, the revolutionary ideas of Che and Castro define the unique character of the Cuban revolution. Could you imagine going to a conference on Cuban Revolution minus these figures. This is what we witnessed at the PAT conference. One or two pictures of Nkrumah, no Cabral, no Mangaliso and Zondeni Sobukwe, no Amy Ashwood Garvey, no Amy Jacques Garvey, no Marcus Garvey, no W.E.B. Dubois, no Sékou Touré, no Winnie Madikizela Mandela, No George Padmore, Queen Mother Moore, no Claudia Jones, or Steve Biko, just to name a few. Rosa Luxembourg thou a brilliant revolutionary was not a Pan-Africanist.

The organizers rendered Pan-Africanism invisible at a Pan-African conference. Yet worst they reduced Kwame Nkrumah, a central ideological figure to developing revolutionary Pan-Africanism, the non-aligned movement, OSPAAAL; a great anti-colonial Internationalist, to simply a socialist and communist. Nkrumah was indeed a materialist thinker, a socialist and a communist. He developed materialist thought and applied it directly to the African revolution and using both a historical and materialist approach organically linked both Pan-Africanism and Socialism declaring them inseparable. He linked them to global anti-imperialism struggles; as did Lenin in the Russian context and Mao in the Chinese context, etc. So complete was his analysis; Nkrumahism as an ideology, will lead you to “One Unified Socialist Africa” toward World Communism. Nkrumah understood because of the relationship of Africa to global capitalism; socialism could not just be built-in individual nation/states in Africa and protect itself from neo-colonialism.

The development of a single continental government is imperative to our Pan-African objective. Some Marxist-Leninist thinkers who tried for years to side-line Pan-Africanism as narrow nationalism are using the lingo of Pan-Africanism and Nkrumah as a tactic. They find themselves uncomfortable with African Revolutionary thinkers who do not call themselves Marxist. This line does not speak to Nkrumah’s understanding that the masses are the makers of history. When the people’s mass consciousness reaches a revolutionary height with mass revolutionary organization they will achieve Pan-Africanism under the power of the working class. The problem PAT faces are Kwame Nkrumah, Sékou Touré, Amilcar Cabral, Amy J. and Amy A. Garvey, Mangaliso Sobukwe left a paper trail; their Pan-African and Socialist writings. How do you make a speech about Nkrumah void his fundamental pivotal book the Handbook of Revolutionary Warfare a defining blueprint for the African Revolution or at the very least mention his definition of Pan-Africanism? Except for Kwesi Pratt of the Socialist Forum no one else made mention of the book.

The principled struggle of genuine Pan-Africanist at the conference emerged out of the commissions and their report backs on Saturday. The call from the “Battle of Ideas” commission to use the 5th PAC definition of Pan-Africanism, and the call for studying Africa’s contributions to revolutionary thought arising from their own cultural experiences in struggle for unity before and after colonialism is an example of the honest debate that took place at the conference. The contribution from the “Feminist” commission calling for the institutionalizing of political education training for women in all states throughout the continent; the development of a collective revolutionary feminist curriculum; the building of revolutionary and mass women’s structures/organizations throughout the continent and the institutionalization of Pan-African Women’s Day was agreed inside the commission. Although the resolutions were hotly contested from those commissions none were passed before the end of the conference. What happens with these resolutions will not halt the people’s genuine struggle for Pan-Africanism, but it will clearly define PAT’s Pan-African character going forward. Pan-Africanism can only be brought about by the struggle for ideological and organization clarity.

Pan-Africanist led by revolutionary ideologies will struggle against political opportunism on the right and left. As socialist we will fight to unite the workers of the world against capitalism and imperialism with highest level of solidarity. Yet we are clear the greatest contribution Africans can make to communism at this stage is fighting for one unified socialist Africa. “Forward Ever Backward Never”.