You are here: Home / Blog / Revolutionary Solutions: Mass Based Alternatives Towards Community Empowerment 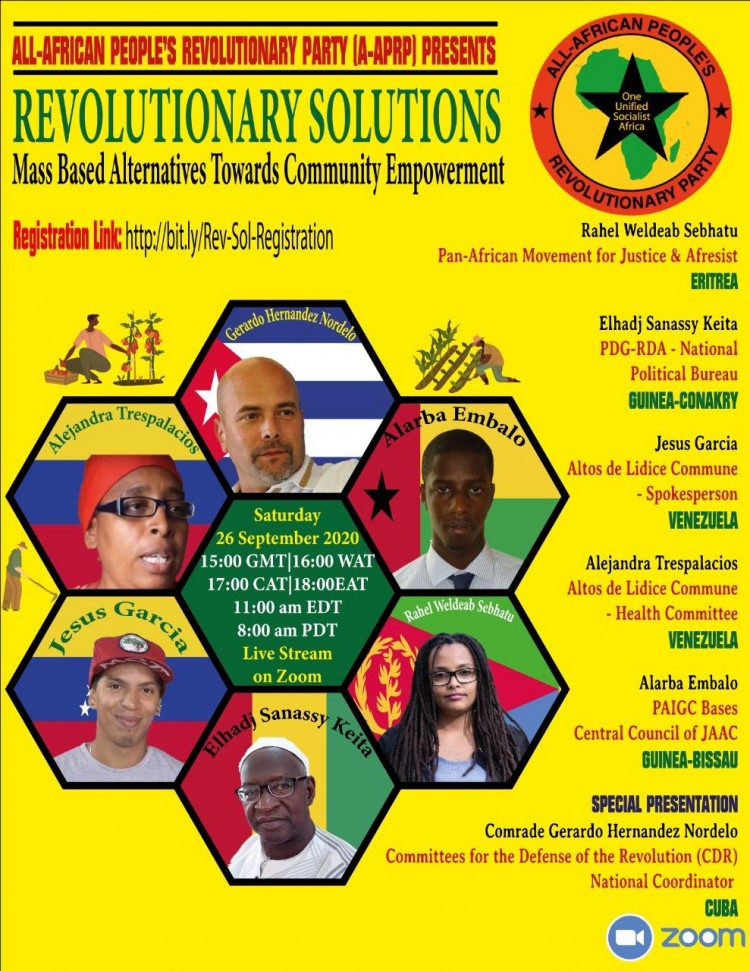 The All-African People’s Revolutionary Party (A-APRP) is hosting an International Webinar via Zoom with the theme – “Revolutionary Solutions: Mass Based Alternatives Towards Community Empowerment“. PLEASE REGISTER IN ADVANCE FOR THE ZOOM LINK. The webinar will be held on Saturday 26th September 2020 at:

Throughout modern history dominated by capitalism and imperialism, the oppressed and exploited people of the global south have fought to free themselves from the various forms and manifestations of foreign domination. During colonialism, many countries in Africa, Asia and the Americas waged armed struggle, non-violent positive action campaigns and the like. While fighting in various ways to free themselves from external forces, many leading the struggles had the vision of the future. They understood the need to establish means of subsistence required to both ensure the people’s survival to continue the struggle as well as the lay the foundations for what an independent community and nation could become upon freedom. Some took the form of liberated zones, which were used to build up local people-run medical centres, educational facilities, self-defense units and economic cooperatives.

As the crisis within the capitalist system has reached greater heights and more and more people amongst the oppressed are seeing the true anti-human nature of the system, the imperialist propaganda machine is doing its best to stop the people from organizing themselves to become independent of imperialist control. One of the imperialist weapons of mass confusion is to convince the people that they are not and have never been architects of their own destiny.

With this webinar, we want to provide historical and current day examples of revolutionary community and national self-reliance, conceived, planned and built by people in the Global South to show what has been done, is being done and can be done. The examples provided can serve as inspiration to the creative thoughts and actions of the youth and women of the African world and inspire greater networking between progressive forces operating sometimes in isolation from one another.

Rahel is a PhD candidate in Global Politics. She is a Board Member of the Pan-African Movement for Justice (in Sweden) and Research Lead for Afresist. She will be speaking on the SAWA process in her home country of Eritrea, East Africa

Alejandra is a Community Activist, who is part of the Altos de Lidice Commune in Caracas, Venezuela. She is a member of the Commune’s Health Committee. The Commune is made up of 7 councils comprised of 4,000 inhabitants in Western Caracas

Jesus is a Community Activist, who is part of the Altos de Lidice Commune in Venezuela. He is currently the Spokesperson of the Commune. The Socialist Commune focuses on self-government, self-reliance and community involvement and developed as a response to the negative impacts to the crushing U.S. imposed sanctions against Venezuela

Comrade Alarba is a member of the Central Council of the Amilcar Cabral African Youth (JAAC) in Guinea-Bissau serving as the National Secretary for Administration and Finances. He will be speaking about the Bases of the PAIGC, which operate at the community level throughout the urban and rural areas of the country.

Elhadj Sanassy serves as a Member of the National Political Bureau of Democratic Party of Guinea-African Democratic Rally (PDG-RDA). He is Secretary in charge of training and ideological questions. Elhadj Sanassy will be speaking on the history, function and successes of the Local Revolutionary Power (PRL) during the time of Revolutionary Guinea led by Ahmed Sekou Toure

Comrade Gerardo is currently serving as the National Coordinator of the Committees for the Defense of the Revolution (CDR) in Revolutionary Cuba. He is one of the Cuban Five Patriots. Gerardo is speak on the history of the CDRs and how they operate historically and contemporarily in Cuba as a means of organising the Cuban populace to stand in defense of the nation