You are here: Home / Feature Story / Revolutionary Organization is The Weapon of the Oppressed and Terrorized 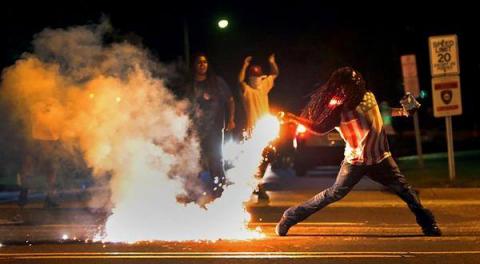 The rebellions in Missouri are part and parcel of the people’s legitimate mass struggle against capitalist oppression and domination. The capitalist system does not fear these rebellions, but it does fear the rebels. Let’s consider why.

In Missouri, USA another African youth is dead. A police officer pulled the trigger, but really it was the capitalist system that killed him. For generations capitalism has ravaged the wealth, labor and dignity of the world, and people everywhere have fought it bitterly. In the process the people have inflicted fatal wounds. Capitalism is now a dying system and it is using the most desperate means to maintain its control of the planet. That desperation explains the killing of 18-year-old Michael Brown.

The biggest threats to capitalist control are the people who have been most exploited by the system. You know who they are. They are minimum wage workers, migrant farm laborers, First Nations (“Native Americans”) and many others. Among the ranks of the oppressed and exploited are African youth like Michael Brown. When it comes to incarceration rates, police harassment, unemployment and miseducation, African youth are among those who suffer most. At the same time, their energy, brilliance and courage give them the greatest potential to fight back. Not convinced? Take a look at the news reports of the rebellions in the Ferguson, Missouri streets. We rest our case.

It is logical then that as capitalism holds on for dear life, it will go all out to aim its violence, hatred and oppression at those who pose the greatest threat to its continued survival. The role of the police and security agencies in any society is to protect the collective interests of the ruling class within that society. Thus in a capitalist society, the ONLY function of the police is to defend and protect the interests of the very tiny minority who control the system and benefit from it.

This is not just limited to Ferguson, Missouri. The cold-blooded murder of Michael Brown is just the latest in a long line of terrorist acts committed globally against African people in recent years. These incidents have occurred in India, Saudi Arabia, Somalia, and the Dominican Republic just to name a few. This terrorism has been systematic, institutional and most importantly is part of the very nature of the capitalist-imperialist system.  This terrorism is a NECESSITY in order to maintain a system that is anti-people, as human beings will never consciously support a system that seeks to dehumanize and exploit them.

The rebellions in Missouri are part and parcel of the people’s legitimate mass struggle against capitalist oppression and domination. The capitalist system does not fear these rebellions, but it does fear the rebels. Let’s consider why.

The Path to Power Starts with Organization

Power is the ability to determine one’s collective destiny even in the face of opposition. Power is NOT an individual force; it is ONLY a collective force. Barack Obama as an individual is not powerful. He is just the caretaker of power wielded by those wealthy corporations and individuals who control the capitalist system. The capitalist system’s power derives from a very high level of organization. The system is not threatened by the disorganized, spontaneous rebellions of Africans in Missouri, because highly organized police and National Guard troops are prepared to do whatever is necessary to extinguish these fires of rebellion, even if it takes days or weeks. What the capitalist system DOES fear is the day when African young people like Michael Brown, recognize that they too can be powerful if they too organize themselves rather than engaging in random, unplanned acts of resistance. The system is even more afraid of the day when these African youth recognize that they can become even more powerful than the capitalist system if they organize, not just in Ferguson, but globally.

Organization is the Greatest Force

For 40 years the All-African People’s Revolutionary Party (A-APRP) has been calling for the establishment of “African United Fronts.” (Allied organizations prepared to defend African communities). We must engage in critical political analysis and study to understand the history and the root causes of our oppression as well as our future possibilities and future positive vision as a people. We must move towards developing collective self-defense and survival skills training and move systematically on a democratically defined agenda for our betterment and advancement. The All-African People’s Revolutionary Party (A-APRP) and its Women’s Wing, the All-African Women’s Revolutionary Union (A-AWRU) have taken up the fight to organize globally for the purpose of liberating Africa from capitalist control and then to unite the African continent under a single socialist government so that Africa’s wealth can no longer be used to oppress us, but can instead be used to help us defend ourselves from police and other threats, and ultimately develop to our fullest potential everywhere Africans live in the world. We hope that you will consider joining our party to help us help ourselves end this cycle of brutality for good.