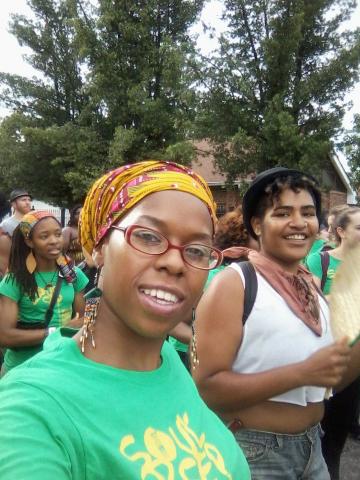 The Latin American School of Medicine (ELAM) in Cuba was conceived in 1998 as Cuba’s proactive response to a huge humanitarian disaster in Honduras, Hurricane Mitch. Honduras was unprepared for the magnitude of the storm which resulted in unprecedented floods, mudslides, loss of homes, crops and life. Cuba sent doctors and other medical personnel and in Mitch’s aftermath, Cuban President Fidel Castro proposed the establishment of the Latin American School of Medicine.  Full scholarships were provided for thousands of students mainly from Latin America, the Caribbean and Africa. Upon completion of their six year training, these revolutionary doctors, most of whom come from poor families in underdeveloped countries, are expected to return to their communities. There is no contract or service minimum but rather a moral expectation to utilize their medical training to improve the health of the People.

Dr. Amandla Shabaka-Haynes is a beneficiary of the Cuban scholarship program for qualified U.S. citizens who want to study medicine and have a commitment to serve in the underdeveloped communities from which they hail. The offer of scholarships to U.S. students was extended in 2000 by President Castro, despite the illegal U.S. blockade and imprisonment of the “Cuban Five.” To date, the successful program has produced 68 graduates. Cedric Edwards was the first U.S. scholarship recipient to graduate from ELAM. Born and educated in New Orleans, Cedric is now practicing in Mississippi with his wife, also an ELAM graduate. Amandla knows that she is also a beneficiary of Cedric’s success. ”He paved the way.”

Overall, ELAM has produced 24,000 doctors from 116 countries since its inception in 1999. This year, Dr. Amandla will join their ranks. We recently interviewed Amandla and learned some of her story.

Born in Tallahassee Florida, Amandla grew up in a strong, close, progressive family steeped in African culture and tradition. It’s no accident that she developed an early passion to become a member of the healing community. (Both of her parents worked in the health field, Her father was an acupuncturist and her mother was a health administrator.)

Amandla graduated from Xavier University in New Orleans with a degree from its prestigious pre-med program. The program is well known for graduating the highest number of African applicants to medical school. In spite of this, Amandla was hesitant to apply to the traditional U.S. medical schools, given the exorbitant costs and the competitive nature of admissions and matriculation.

“I realized that medical school was outrageously expensive and I didn’t see myself enjoying it, given the energy of competition that surrounds some programs—getting professors on your side; who has the best letters of recommendations, the best STEP scores or the most information that can impress attending doctors. That was never my vibe—stepping on others toes to get where I wanna be. I come from a background of working together and unity. I didn’t feel comfortable in that environment, but I knew I wanted to pursue some area of health and I was thinking epidemiology, public health administration, nutrition or something.”

She first heard about the Latin American School of Medicine (ELAM) during a graduate fair from a friend and former Xavier student who had just completed her first year at ELAM. Amandla’s friend was traveling with an exhibit to promote Cuba’s scholarship program which had set  aside 500 medical school scholarships for young people born in the U.S. Cuba, well-known for its international humanitarian missions was also giving high quality medical training to young future doctors who would go back to their communities to serve those most in need.

Thousands of well-trained doctors, imbued with the spirit of “Che” return to their countries with a mission and commitment to serve in the most neglected

Amandla applied to ELAM, interviewed and was accepted. After months of preparation and delays*, Amandla said goodbye to family and friends and headed to Cuba in 2005. She landed in Cuba just at the time when Hurricane Katrina hit and devastated New Orleans.

“In Cuba, I witnessed the revolution in action. You hear stories, read books, see propaganda about what socialism is about, what the revolution stood for. But when Katrina hit I saw the revolution in action and what socialism is all about. That inspired me to stay at ELAM and continue my medical career. The Cubans organize and they organize well. 1600 Cuban doctors, well trained in disaster medicine were ready to go. The planes were on the landing strip at my school. They had everything. They asked students from the U.S. delegation to give a seminar on the culture of New Orleans and what they might encounter. It was amazing to me that they could organize so fast. My friend who told me about ELAM was there and another guy who graduated from Dillard University in NewOrleans. It was amazing to see those ideas in motion. And for all of that to be shut down….”

It’s well known that the U.S. rejected the humanitarian assistance that was quickly and generously mobilized by the Cuban government. Cuban aid in other internation disasters (Hurricane Mitch in Honduras, earthquakes in Haiti and Pakistan) has proven immensely effectual and saved many lives.

“…I know that my school is training an army of doctors. We can be that brigade. We can go to those places where there’s no access to health care, provide those services, be where we’re needed and help our people.”

Unlike any place she had ever visited, but familiar in a deeply rooted African way, Cuba welcomed Amandla as she got to know the rhythm and lay of the land and improved her Spanish language skills. “Most people think I’m Cuban until I start speaking my Spanish,” Amandla laughs. Her previous high school and college Spanish courses were a good introduction. However, all ELAM courses are taught in Spanish and students who are not proficient are required to take a six month intensive Spanish course.

After the language course, Amandla’s medical education began in earnest. The curriculum is rigorous, based on Cuba’s national system called Medicina General Integral (MGI) or Comprehensive General Medicine, which emphasizes community-based preventive care. The life of a Cuban doctor is strenuous and ELAM trains doctors who can do much with little and who prioritize the well-being of their patients and communities over everything. “Cuba trains grassroots doctors. They don’t train doctors to use all this high technology. They’re not used to cars and fancy houses—you have what you need and that’s what you use to do your work. Plus, you have your passion. You have to love it.”

For Amandla, going to study in Cuba had its own set of challenges. “The first two years actually prepare you for a life of sacrifice. ELAM is an old naval base, situated on the oceanfront on the outskirts of Havana and there’s a river running in front of it. Four thousand other students from all over the world; most speak Spanish or other languages. We live barracks style. Some dorms have 20-30 students per dorm, with communal showers, no kitchen, one fridge, limited internet access, phone calls are super expensive and kind of isolated from the happenings in city.”

“As a young person coming from the U.S., where you have access to everything, it’s very intimidating. It’s one of those things where either you know you can adapt to those hardships or that you can’t—and you go home. I’m an adaptable person. I’m not gonna say that I didn’t complain about certain things, but it got easier as time went on and once I committed myself to being a medical student there it got much easier. I decided ‘oh well, this is just another learning experience,’ let me get my shower shoes, let me find a house I can rent on the weekends and buckle down.”

At the beginning of her third year, now an intern, Amandla was transferred to Salvador Allende Hospital in Havana. At Allende, one of 14 teaching hospitals in Cuba, interns are assigned to patients under the supervision of Cuban doctors, marrying theory with practice.

A lot has happened for Amandla since 2005. Not only has she nearly completed her medical degree, she also gave birth and became mother to a beautiful daughter, who is cared for by her family in Florida. One of the major hardships of finishing medical school in Cuba is being separated from her daughter, but Amandla’s family collectively works to provide a strong circle of love and protection for their child. The family’s devotion and closeness reassures Amandla that the temporary separation will bring rewards for her daughter, the family and the entire community.

In addition, Amandla credits the Birthing Project and Dr. Mom programs, founded by Katherine Trujillo (Mama Kat) with providing the basis of her support system in Cuba. Through these innovative programs, Amandla and other women medical students found support for their matriculation through ELAM and motherhood. The Dr. Mom program and The Birthing Project provide practical support to women during pregnancy and for one year after the birth of their children.

The Birthing Project is improving the health of women in Africa, the Caribbean and the U.S. with safe birth kits

Just like her beginnings in the health field, Amandla’s vision for the future has its roots in her upbringing. Raised to think community and build collectively, her 10 year plan includes returning to the U.S. to complete the U.S. Medical Licensing Exam and opening a cooperative holistic health care practice with other community-centered practitioners e.g. family medicine, dentistry, alternative health options and therapies. “We can refer patients throughout the practice and educate around prevention.”

We salute Amandla, the thousands of African women who dedicate themselves to improving our peoples’ health and the Cuban people whose generosity is incomparable.