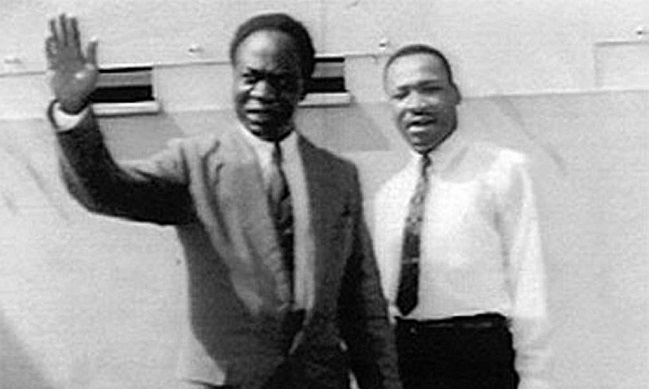 MLK and Kwame Nkrumah in Ghana, West Africa in 1957 during Ghana's Independence celebrations

Most people recognize Dr. Martin Luther King Jr. as a great man (which he certainly was).  However, many of us do not really understand his philosophies.  To know any “leader” we must understand his or her concept of our struggle.  For example, what did Dr. King say was the solution to the problems we face as a people?  What were Dr. King’s views of the economic system under which we live?  What did Dr. King think of Africa as well as what was his conception of revolution?

ON THE CAPITALIST ECONOMIC SYSTEM

“…The problems we face will not be solved until there is a radical redistribution of political and economic power.  As we think about where we go from here, we must face the fact that the movement must address itself to the restructuring of the whole of American society.”“…America’s gross national product will rise to the astounding figure of over 780 billion dollars this year – why are there over forty million poor people in this country?  And when you begin to ask that question, you are raising questions about the economic system, about a broader distribution of wealth…and I’m saying that more and more, we’ve got to begin to ask questions about the whole society.  We are called upon to help the discouraged beggars in life’s market place.  But one day we must come to see that an edifice which provides beggars needs restructuring…questions must be raised.  You see, my friends, when you deal with this, you begin to ask the questions.  Who owns the iron ore?  Who owns the oil?  Who owns the gold?  The world is two-thirds to three-fourths water, why do people have to pay water bills?  These are questions which must be raised.”

ON REVOLUTION AND CULTURE

“…if America is to get on the right side of the world revolution, we as a nation must undergo a revolution of values.  We must rapidly switch from a ‘thing oriented’ society, to a ‘person oriented’ society.  Where machines, computers and profit motives will not take priority over human lives.”

“Africa has been depicted for more than a century as the home of Black cannibals and ignorant primitives.  This picture (the stereotype) persists in books, motion picture and other media of communication.  Africa does have spectacular savages and brutes today, but they are not black.  They are sophisticated white rules of South Africa who profess to be cultured, religious and civilized, but those whose conduct and philosophy stamp them unmistakably as modern day barbarians…

The shame of this nation is that it is objectively an ally of this monstrous government in its grim war with its own Black people…For the [African in America],there is a special relationship with Africa.  It is the land of our origin.  It was despoiled by invaders; its culture was arrested and concealed to justify white supremacy.” (Joint Statement against Apartheid with ANC Chief Lutuli, December 10, 1962)

As a people, we must not allow the enemies of King and the masses of the people to frame the narrative on our heroes or our struggle.  This is our task and ours alone.  Let us stand for the TRUE legacy of King and use it as fuel to drive our liberation movement to victory.  JOIN/SUPPORT THE A-APRP OR SOME ORGANIZATION FIGHTING FOR THE PEOPLE’S INTERESTS TODAY!