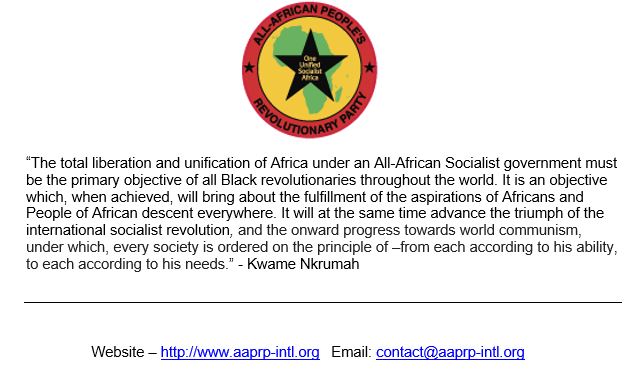 The All-African People’s Revolutionary Party (A-APRP) strongly condemns the decision by the African Union (AU) to grant the state of Israel observer status. The A-APRP opposes the illegal, racist state of Israel and stands in uncompromising solidarity with the Palestinian People who are currently experiencing another genocidal zionist assault. The zionist state claims Jerusalem as their capital in contradiction to international law and they continue to expand settlements into Palestinian territories while killing Palestinian People daily. For the AU to sanction Israeli genocidal practices by admitting them as observers is a slap in the face of the Palestinian People and all justice loving people of the world. Granting observer status to Israel in the AU reflects the dominance of neo-colonialism in Africa and shows that the current leadership of the AU is shamelessly towing the line of the imperialist enemies of Africa and African People everywhere

The A-APRP not only condemns the AU action because of Israeli treatment of Palestinians but also because of the relationship of zionism to the continued imperialist domination of Africa and African People everywhere. The zionist intrusion into Africa is designed to ensure that their criminal political and economic interests in Africa are upheld and protected.  When zionists say they want observer status to “help Africa fight international terrorism”, they really mean they want to continue to rob Africa of its gold, diamonds and other strategic resources. The zionists serve as the right hand of imperialism by suppressing African people’s resistance to oppression on one hand and to sabotage African/Palestinian solidarity on the other.

The zionists train the police and military in Africa and around the world to repress dissent by oppressed and exploited People. They teach anti-insurgency methods perfected in their 63-year campaign of terror against the Palestinian People. Above all else Israel is a guarantor of imperialist access to Africa’s vast material resources. Nothing the zionists are doing or have ever done in Africa benefits African people anywhere.

The African Union was originally founded as the Organization of African Unity (OAU) on May 25th, 1963, by then Ghanaian President Kwame Nkrumah and Ethiopian Emperor Haile Selassie. The purpose of the OAU and the AU is to build genuine African liberation, unity and self-determination. The AU is supposed to bring African states together to create a better life for African People everywhere. The decision to allow Israel into the AU is an abdication of that sacred charge and a surrender to the neo-colonial forces responsible for our people’s ongoing oppression and exploitation.

The A-APRP recognizes that all zionists are imperialists and that all imperialists are zionists. The ruling parties in the USA are both zionist organizations through and through. The illegal state of Israel is the junior partner of American and European imperialism at every turn.

The All-African People’s Revolutionary Party condemns the Heads of States of Africa for allowing the African Union, whose predecessor was the Organization of African Unity, to become a field of influence for the imperialist and zionist enemies of Africa. That great son of Africa – Kwame Ture – was fond of saying, “Capitalism doesn’t lie some of the time, it lies all of the time. The only time it tells the truth is the result of a double lie.”  When Israel says they “want to help stop terrorism in Africa”– they lie. When they say, “Israel wants to help stop Covid in Africa!”– they lie. The truth in the double lie is that “Israel wants to be in Africa” to serve imperialism and not to help Africa or African People.

The A-APRP calls upon the African masses to recognize the scam that is taking place before our very eyes.  The zionists, working in collusion with international imperialism led by the United States of America, obtained observer status in the African Union as a vehicle to further entrench their influence throughout Africa. The more influence zionist Israel has in Africa, the more African people, and the Palestinian people suffer and continue to be denied our rights to justice and self-determination.  We call upon the African masses to resist zionist existence and further intrusion into Africa.  The A-APRP unites fully with the Palestinian people in their just anti-colonial struggle to end zionist occupation of Palestine (Israel).

We call on the AU to rescind Israeli observer status to the African Union immediately!

We tell the Israelis to get your bloody hands off Africa. Israel Out of Africa Now!

Forward to One Unified Socialist Africa!