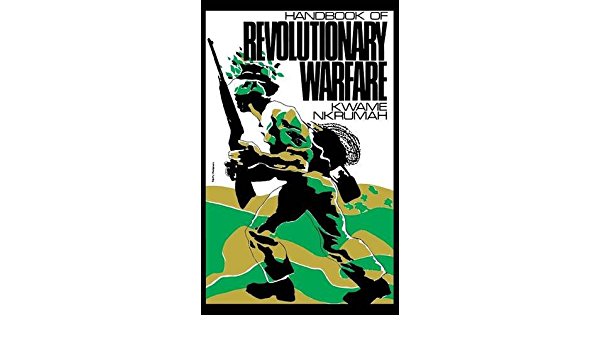 Handbook of Revolutionary Warfare by Kwame Nkrumah is 50 years old this year. It first appeared toward the end of 1968. The original publisher was Panaf Books, Ltd, out of London. Nkrumah dedicated the handbook to the “African guerrilla”. He states, “The guerrilla is the masses in arms”. The Handbook is subtitled ‘A Guide to the Armed Phase of the African Revolution.’ It served to motivate liberation movements through most of the late 20th century. It also served as a guide to revolutionary political engagement for millions more of the masses that were not engaged in military action. The call for revolutionary political engagement is needed now more than ever. Over the next 12 months, the All-African People’s Revolutionary Party (A-APRP) will examine how this book was groundbreaking 50 years ago and yet still relevant today.

Nkrumah structured the book in two parts. He actually called part one “Book One – Know the Enemy” and the final part “Book Two – Strategy, Tactics and Techniques”. The need to understand the enemy we face is essential to being able to establish and implement the most effective political line, programs, strategies, tactics and techniques to defeat the enemy. Before the Table of Contents (TOC) that outlines the sections in Book One and Two, Nkrumah provides a page titled Rules of Discipline. On this page are listed 15 short rules that apply to organisers. These are all relevant today. What additional rules would you add? This is an important start for this book. It sets a clear tone. Nkrumah is addressing organisers. These rules are rules of engagement for an organiser activist.

The subtitle of ‘the Handbook’ is “A Guide to the Armed Phase of the African Revolution”. Written in 1968, this was very timely. Much of Africa was engaged in armed struggle from Guinea Bissau, Angola and Namibia on the Atlantic Ocean side of Africa to Mozambique on the Indian Ocean side and most intensely Zimbabwe and Azania/South Africa. Now all of these countries have their political independence. Today, where does Africa stand in terms of a need for armed revolution?

Much of the information in the Handbook provides a historical context of the struggle in Africa in the second half of the 20th Century. So much has changed in Africa and the world.  What in the framing and the content of the Handbook is relevant today and how can a revised handbook serve the interest of the African revolution? This is one of the challenges the A-APRP will address, but not alone. We will be asking revolutionary Pan-African organisations to engage in study, analysis and activism in a quest to address this and other important questions that arise from Kwame Nkrumah’s classic – Handbook of Revolutionary Warfare.