You are here: Home / Feature Story / Your Pepper Spray Can’t Stop the Organization of African People 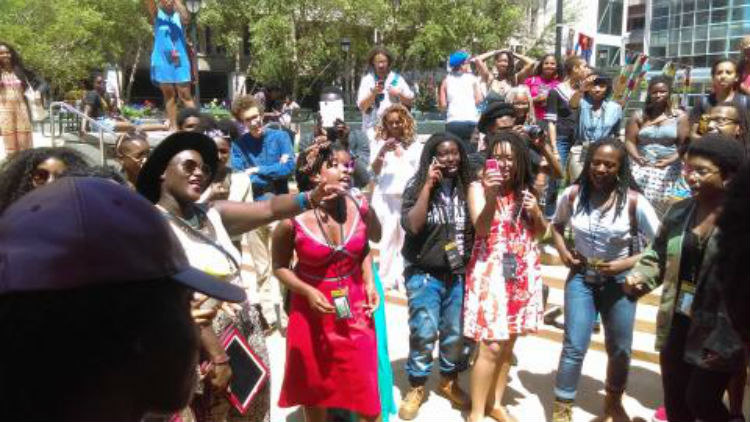 “The A-APRP knows that not only do Black Lives Matter but All African Lives Matter across the globe and Pan-Africanism the total liberation and unification of Africa under Scientific Socialism represents the ultimate goal for protecting and empowering our people everywhere.”

The All African People’s Revolutionary Party joined the 1200 people mostly youth that assembled in Cleveland for the “Black Lives Matter Convening” from July 24-26.  Our message was clear and concise as we tabled and attended workshops. The AAPRP knows that not only do Black Lives Matter but All African Lives Matter across the globe and Pan-Africanism, the total liberation and unification of Africa under Scientific Socialism represents the ultimate goal for protecting and empowering our people everywhere. The A-APRP restates that the police murdering of African people is part and parcel of a (his)tory of systematic violence rooted in patriarchy, slavery, and colonialism. Today it is continued through modern day capitalism and all forms of  imperialism from settler-colonial states like the European occupation of indigenous peoples land in the America’s and  Zionist Israel’s occupation of Palestine to neo-colonial states who collaborate   with this racist violence against Africans, Latinos, immigrants and poor people from the Dominican Republic to Colombia. The A-APRP calls for nothing less than a dismantling of Military Police Prison Industrial Complex as stated in our 2015 African Liberation Day presentation.

A-APRP recognizes the Black Lives Matter Movement as a significant movement in this generation. The movement is a focal point for the state violence directed at people’s of African descent in the United States, these youths shutdowns, protest and direct confrontations have inspired  us and forced the enemies of humanity to give lip service to the movement. But just like all movements of African people’s there are forces bent on containing our liberation struggle to the one percents’ bourgeois democratic electoral politics. This movement like the Black Power movement in the U.S. and the Black Consciousness movements in Azania (South Africa) reverberates across waters, airspaces, and continents, our fist are raised once again in a struggle for change and only the masses of people will ultimately determine its path.

The youth at this conference represented the African world; many second generation Africans from Nigeria, Ghana, Haiti, Dominican Republic, Ethiopia, etc. When we set in workshops conducted by youth from Azania (South Africa) and the Dominican Republic, these youth were clear, Africans everywhere are part of this movement and it will be pan-African. The Black Lives Matters movement represents a cross section of our community youth and elders, families of victims, liberals, nationalist, LGBTQ, Pan-Africanist and other African Left. Every sector of our community suffers from the world-wide murderous violence from the Military Police Prison Industrial Complex from Baltimore to Libya

This movement has already lit a fire under Democratic Party, whose candidates have now picked up the Black Lives Matters slogan like they did with the end apartheid slogans in the 80’s. The A-APRP knows neither the racist capitalist democratic or republican parties built on the oppression of black and brown bodies nor their clones in other countries will ever yield power to the people. The AAPRP calls for smashing of all these parties that serve the interest of corporations and not people. All African People and our allies must organize to continue to build our own political power.