You are here: Home / Feature Story / Pan-Africanism: The Real Afro-Futurism 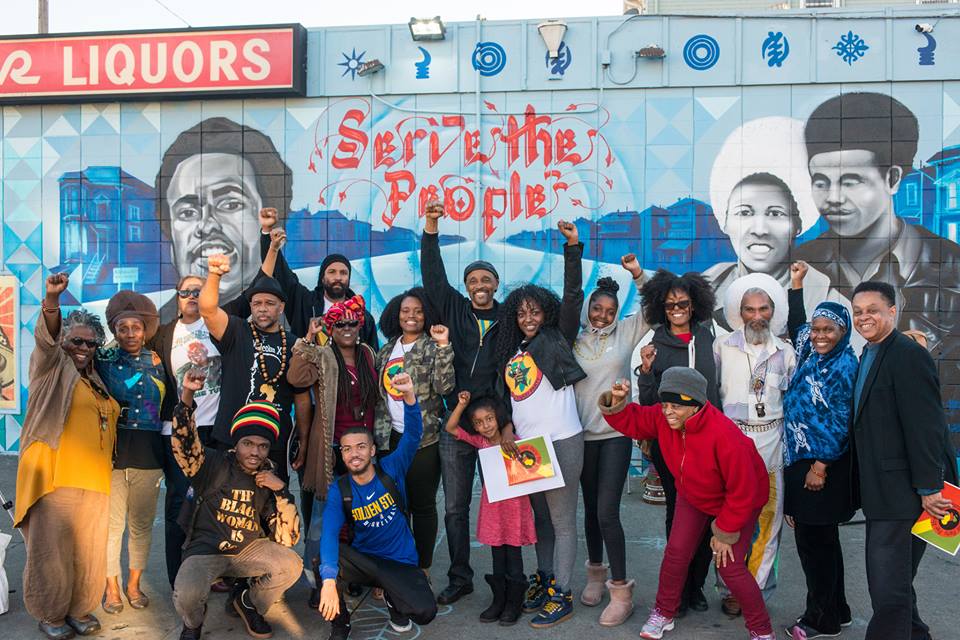 A-APRP Members and others in Oakland, U.S. in front of mural of Huey Newton

I am not African because I was born in Africa but because Africa was born in me.” — Kwame Nkrumah

As Disney and Marvel Comics are forced to address the rising imaginations of independent African thinkers, writers, comics, filmmakers, bloggers, “Hip Hop” artist, gamers and activist who call themselves Afro-Futurist, they released their blockbuster Hollywood version of Black Panther.  Please remember that Black Panther the comic character was invented for Marvel in 1966 by two European American men at the time of the emergence of the Black Power movement. There was on one hand a fictional character who could be controlled in the confines of a capitalist medium (Marvel Comics) and a real Black Panther Party (BPP) challenging a very real and brutal white capitalist imperialist system and its military prison police industrial complex. The Black Panther Party, as in all African’s resistance movements facing the white supremacist system in the diaspora before them, would have to look at themselves as part of the world-wide struggle against imperialism and ultimately part of the global Pan-African struggle.

Kwame Ture (formally known as Stokely Carmichael) an African born in Trinidad and who grew up in New York City became one of the “Symbols” of this Black Panther generation embracing Black Power. He was part of the Student Nonviolent Coordinating Committee (SNCC) militants that launched the slogan Black Power and the introduction of the symbol of the Black Panther in armed defense with African voters in Lowndes county Alabama with the Lowndes County Freedom Organization (LCFO). He fully embraced the objective of Pan-Africanism as the honorary Prime Minister of the Black Panther Party. He joined Kwame Nkrumah, Sekou Toure and Amilcar Cabral in Guinea Conakry in 1968 at the height of the armed struggle in Guinea Bissau, Angola, Mozambique, Zimbabwe, and Azania/South Africa. Kwame Ture, a Black Panther like other Black Panthers of the time (Assata Shakur, Huey Newton, H. RAP Brown, Kathleen Clever, and Barbara Easley Cox) contributed to global revolutionary ideological and armed struggle against Western imperialism. Africans from the western hemisphere in Cuba, Jamaica and some from the U.S. actually fought in Africa. Kwame Ture, like his African sisters and brothers since the 1900’s worked for the Afro-Futurist vision of One Unified Socialist Africa and a unified African people globally. This futuristic vision is not rooted in fiction but in ideological and organizational fact. An ideological vision fully articulated in the 5th Pan-African Congress in 1945 by the likes of W.E.B. Dubois, Kwame Nkrumah, George Padmore, Amy Ashwood Garvey, Amy J. Garvey(not physically present), and organized youth, women and workers of the African world. The Pan-African strategy for national liberation was implemented against colonialism from 1950’s through the 1990’s liberating 53 countries from traditional colonialism.

If you want some real Afro-Futurism read the visionary genius of Kwame Nkrumah’s Handbook of Revolutionary Warfare this year in its 50th year of publication. This book inspired the second phase of Kwame Ture’s political life.

The fortunes of the African revolution are closely linked with the world-wide struggle against imperialism. It does not matter where the battle erupts, be it in Africa, Asia or Latin America, the master-mind and master-hand at work are the same. The oppressed and exploited people are striving for their freedom against exploitation and suppression…” — Kwame Nkrumah

Hollywood was producing Tarzan (a white hero in Africa) movies in the 1950’s when the Algerians were waging serious struggle against the French, and African revolutionaries from around the world were using Ghana as base for Pan-African struggle. The brilliance of Nkrumah, Sekou Toure, Shirley Dubois, George Padmore, Amilcar Cabral and the national liberations raging throughout Africa were being drowned out by the imperialist propaganda machine. It was our independent African artist voices who gave light to these struggles through the “African/Black Arts Movement” not Hollywood. The African writers Conference in 1962 held in Uganda attended by many prominent African anti-colonial writers, from West Africa Chinua Achebe, Wole Soyinka, John Pepper Clark, Obi Wali, Gabriel Okara, Christopher Okigbo, Bernard Fonlon, Frances Ademola, Cameron Duodu, Kofi Awoonor; from South Africa: Ezekiel Mphahlele, Bloke Modisane, Lewis Nkosi, Dennis Brutus, Arthur Maimane; from East Africa Ngũgĩ wa Thiong’o, Robert Serumaga, Rajat Neogy, Okot p’Bitek, Pio Zirimu, Grace Ogot, Rebecca Njau, David Rubadiri, Jonathan Kariara; and from the African diaspora Langston Hughes  attended. The great Nigerian playwright and Black Power activist in Britain Obi Egbuna authored Destroy this Temple: Voices of Black Power in Britain. The Watts Writers Workshop was burned to the ground by a CIA operative in fear of them producing progressive art. Amiri Baraka, Sonia Sanchez, Audre Lorde and others were writing poems about freedom. The Cultural Association for Women of African Heritage took over the United Nations in response to the US imperialist assassination of Patrice Lumumba. The Freedom Now Suite recorded by Max Roach and Aminata (Abbey Lincoln) covered in song the struggles from Johannesburg to Mississippi. Artist like Hugh Masekela, Nina Simone, and Miriam Makeba linked the struggles of African people globally. So powerful was this “African Arts Movement” it forced Hollywood to again change its tactics but not their ideology. Reform not revolution. Hollywood let Sidney Poitier in 1967 slap a white man in the “Heat of the Night” on camera as long there was a white sheriff hero rehabilitating the racist Bull Conner image of using water hoses and Billy clubs on defenseless Africans in the Southern U.S.  They let Steve Biko’s murder be revealed in the 90’s as long as there was a white savior for South Africa erasing the sting of Apartheid. In 2000’s they let Django kill some white slave masters as long as he’s guided by a white mentor and all the other slaves stay in their place. Now let the Black Panther come to the screen, as long as he works with a white CIA agent.

Marvel hired Reginald Hudlin from 1998 through 2005 and he helped revise the Black Panther character to keep Africans involved in this alternative universe that provides an African hero who never acknowledges Pan-Africanism, challenges U.S. imperialism or works to empower the masses of the people. When the cartoon version in 2010 hit social media, it created a fire storm of interest from African futurists, comic book fans, actors and others, calling for the making of a movie based on this re-imagined African character. Two of the largest imperialist propaganda machines assembled a brilliant cast of African actors and writers spent 200 million and made another film that appeases our desire to be seen on their global platforms in all our glory while defending Hollywood’s global interest in perpetuation of the fiction that U.S. imperialism (Neo-colonialism and Neo-liberalism) are Africa’s friends. Hollywood, to stay relevant in times of resistance will reform and co-opt the images of liberation we provide globally and package them as part and parcel of the American dream. No people or sector who wants to be free relies on their oppressor to tell their stories fictional or otherwise. Do we think the Jewish people would rely on Nazi’s to tell their story of prison camps in Germany, even if the Nazi’s had the biggest platform in the world? Since the CIA who killed, tortured, framed and caused exile of real Black Panthers it is only fitting the CIA would be heroes in the Hollywood Black Panther.

“Black Panther” this Hollywood propaganda is responding to a rising tide of African Youth. Hollywood projects in the movie the African man in the U. S. as that “Black Identity Extremist Terrorist” and those Africans who cooperate with U.S. imperialism as good Black Panthers. Now it’s alright for the Hollywood Panthers to use violence against each other. But never to combine their forces against the forces of imperialism, patriarchy or class oppression.

In the real world, the rising tide of Pan-Africanism is the real Afrofuturism. Look at the youth shutting it down in Azania/South Africa the Congo, and Senegal. There is real communication between African youth fighting around the world. Whether it is “Fees Must Fall” or “Black Lives Matter” there is a new generation looking at the struggles against neo-colonial leaders who are literally giving “Vibranium” to the “Colonizer” and cooperating with the “CIA”.

Africans honor the legacy of the real Black Panthers who rose from the masses of our people fighting for justice. The self-determination of the organized masses is the only super hero. Pan-Africanism is the only objective that ensures our self-determination in the future. Artists must help organize the people for Pan-Africanism. Organize, Organize, Organize, we have nothing to lose but our chains. Join an organization working for your people. Join the A-APRP.