You are here: Home / Feature Story / Pan-Africanism is Power: We Must Unite! 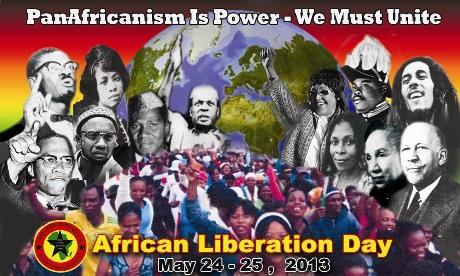 This year’s African Liberation Day theme, “Pan-Africanism is Power: We Must Unite” captures perfectly a conclusion that Africans in every corner of the world are beginning to reach.  As we continue our long struggle for liberation and justice, Africans everywhere now know that cooperation or collaboration with those who oppress us will not yield the results we seek. Rather than a few negotiated token reforms that those with power reluctantly provide, we need our own independent power to address and resolve the serious problems that confront our people.

Why is this true? Consider that while an African country that wallows in poverty may need a strong economy, they won’t get one by entering into loan agreements with international capitalism. Those borrowed funds come with conditions and strict requirements that become chains of bondage that condemn Africans to serving the interests of imperialism rather than the interests of Africa’s people.

Likewise, African countries that seem to have interminable internecine armed conflicts will not achieve domestic stability and tranquility by inviting the presence of U.S. Africa Command (AFRICOM). They will succeed only in clearing the way for the occupation and exploitation of their region.

No less true is the fact that Africans in western countries will not resolve the problems of Africa’s diaspora by electing Africans to parliament, the U.S. Congress, or even to the presidency of the United States. While individuals in these positions may be prominent, they lack power. In fact, their job is to carry out the agendas of a capitalist class rather than a program of liberation for their people.

Many remain confused by the fact that Africans are heads of state throughout Africa, but yet the All-African People’s Revolutionary Party continues to insist that in addition to the nominal independence of Africa’s countries it is necessary for the continent to unite under a single socialist government in order to achieve genuine power. Some do not understand why this is necessary given the fact that throughout the continent, Africans oversee governments, armies and economies. Doesn’t this translate into power?  It does not, and recent history provides convincing evidence that relative to western imperialism, Africa’s countries are small, weak and incapable of, on their own, effectively resisting domination and exploitation. Consider just three examples:

There are many more examples of the vulnerability of Africa’s small, isolated countries. Pan-Africanism will change all of that because it requires the total liberation and unification of Africa under scientific socialism. Once the entire African continent is united, it will have no peer on the world stage.

There will not be a country anywhere with more natural resources, diplomatic influence, military might or economic leverage. This, in short is true power that can be strategically and effectively used to advance the interests of Africans living, not just in Africa, but wherever in the world people of African descent may be found.

While the logic of African unity is easily grasped by most, there is yet in some quarters continuing reluctance to embrace socialism as part of the agenda for Africa’s liberation. Historically, socialism has gotten a bad rap – primarily because capitalism is incompatible with it. Essential to the maintenance and proliferation of the capitalist system has been the need to attack socialism, which is the superior alternative economic system. Capitalist propaganda has been so effective that when political opponents of U.S. President Barack Obama have attempted to insult him in the worst way they could imagine, they have called him a “socialist.” President Obama is many things, but he is not a socialist.

Socialism is essential for Africa because it places Africa’s natural resources in the hands of the masses of Africa’s people rather than in the hands of a few foreign corporations. There is really not much more to it than that. If you think about it, it really just makes good sense. African countries can’t build roads, bridges, schools, hospitals or much of anything else if foreign corporations keep or export the profits generated by the oil and precious minerals in those countries.

If you want to play a role in the struggle for Africa’s liberation and unification, attending an African Liberation Day commemoration is a good start. There, you are likely to learn a great deal about not only Africa, but the struggles of other oppressed peoples throughout the world. Nevertheless, participating in African Liberation Day is not enough. To really make a contribution, it is necessary to become part of an organization that fights for Africa every day. Fighting for Africa is what members of the All-African People’s Revolutionary Party do every day, and there is so much work to be done that they really need your help. Please consider joining. Regardless of your decision about the organization, we wish you an educational and enjoyable African Liberation Day. We thank you for your interest and commitment.