You are here: Home / Feature Story / Palestinian March of Return: “Is Our March” 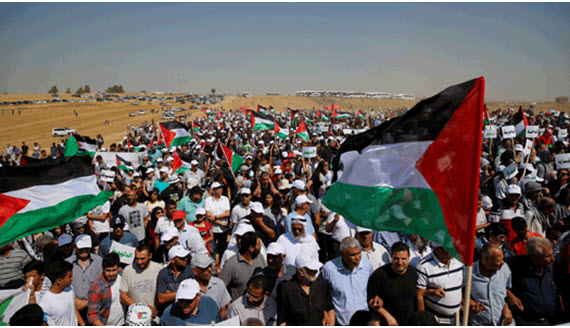 The Palestinian march of return is a testament to the world of a people determined to win against all odds. Palestinians are facing the Zionist Military, the 3rd or 4th largest imperialist army in the world armed with tanks, planes, missiles and drones and aided by 8 million dollars a day by the United States settler-colonial government. 17 killed in the first day and 1500 wounded and they still marched on. Theirs is a march against the racist inhumane Zionist imperialist occupation. Their weapon is justice.  Their struggle is our struggle and all those displaced by the imperialist colonial and settler-colonial occupations over the last 500 years. Their fight is our fight. Zionism is the enemy of Palestinians, Africans and all those seeking the end of exploitation of humans by humans. Kwame Ture correctly said the question of Zionism was the defining issue of the class struggle of African people in this era. African neocolonial leaders that cozy up to the Zionist Israeli expose their betrayal of African people’s liberation struggle that combated Zionist imperialism from Cape to Cairo. The Organization of African Unity (OAU) produced one of the first resolutions against Zionism.

Zionist Israel’s killing of unarmed Palestinians returning home reminds Africa and world of the dreadful killings of hundreds of Africans in Sharpeville in 1960, Soweto youth in 1976 and scores of Africans in the armed and peaceful resistance against settler oppression and occupation. We also remember the role of Zionist Israeli state providing weapons to the white settlers to help commit those slaughters. Like the former Apartheid state of South Africa; the Zionist State of Israel is a settler-colonial occupation with their hands dripping in blood. During President Obama’s administration alone, the bombing of the Gaza strip in 2008 and again in 2012 and 2014 killed thousands of Palestinians including hundreds of children. The murders settler-colonists commit are a genocidal attempt to exterminate the indigenous population to take their land. The United States, South Africa, Papua New Guinea, Australia, New Zealand, Western Sahara, Canada, are but a few examples of mass murder and displacement of indigenous peoples.

Zionist Israel established this illegal state by using the Stern and Irgun, armed gangs that committed massacres using terror on Palestinians and forcing them to flee their homes. Over 800,000 Palestinian people were sent into exile mostly in neighboring Arab countries. The murders continue, and the world cannot be silent. The A-APRP is clear that the imperialist occupation encompasses every inch of all historical Palestine. Africans who have been displaced and spread throughout the globe understand clearly the right to return is a human right as many of us demand the right to return to our home Africa and for the elimination of the colonial borders that deny the free movement of African people throughout the continent. The A-APRP calls on all Africans and their organizations to increase their solidarity with the Palestinian people’s “right to return” and increase our actions against our common enemy Zionism.