You are here: Home / Feature Story / OUT OF AFGHANISTAN TODAY,  OUT OF AFRICA TOMORROW! 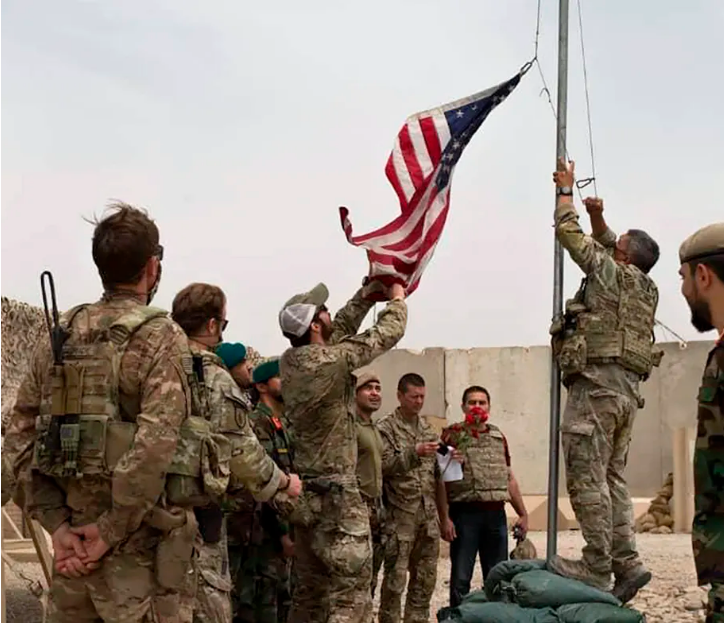 The All-African People’s Revolutionary Party is happy to see the U.S. military being forced to leave Afghanistan. Despite the lies of the mainstream media, the U.S. did not “decide to withdraw from Afghanistan.” The twenty year war against Afghanistan has ended because the United States was thoroughly defeated.  Afghanistan was freed from U.S. occupation. There was no negotiated settlement, there was no United Nations (UN) brokered peace agreement. There was no division of Afghanistan into two states, one controlled by the Taliban and the other by the U.S. and their international partners in crime. This absolute military victory by the Taliban and the poor yet proud Afghan people proves that the vast military might of the U.S. can be defeated.

ANOTHER HUMILIATING DEFEAT FOR THE UNITED STATES MILITARY

The defeat in Afghanistan is not the first time that the United States and its imperialist cronies have been defeated by poor people in colonial or neo-colonial countries. Starting with Haiti in 1804, there have been many outmanned and outgunned peoples who defeated western imperialism on the battlefield. North Korea, Vietnam, China, Cambodia, Laos, Cuba, Nicaragua, Eritrea, Grenada, Algeria, Guinea-Bissau, Angola, Zimbabwe, Mozambique, Namibia, and South Africa/Azania, sent Uncle Sam’s Gang running away like  frightened dogs with  their tails between  their legs, after decisive military defeats.

While some of these victories against imperialism were reversed, the fact remains that the U.S. War Machine is not invincible. The victory in Afghanistan proves once again that “The People United Can Never be Defeated!”  In Guinea Bissau, Venezuela, Nicaragua and Honduras, the People’s forces had to defeat U.S. imperialism more than once. After their victorious armed struggles were reversed, these countries used political action to kick the Yankees back out. Cuba defeated the Yankees in the battlefield and then resisted sixty-one years of sanctions, invasions, assassination attempts, an illegal blockade, and other actions aimed at overthrowing Cuba’s revolution. After defeating the U.S. militarily in North Korea, the People had to endure 67 years of provocation, military threats, and almost total isolation to maintain independence and safeguard their victory. Africans in Eritrea waged sixty years of almost continuous warfare against Italy, Ethiopia, the USSR, the United States, and their European Allies to achieve their independence. They still suffer under sanctions imposed by the Biden administration. All this for daring to claim their independence and beginning the process of building a just society for the African People of Eritrea.  We recall all these struggles to make the point that U.S. imperialism is not invincible. They can and will be defeated in all of Africa and everywhere we suffer imperialist domination.

We learn many lessons from the struggle in Afghanistan. We are more conscious today than we were yesterday despite the pronouncements of capitalist mouthpieces like Zbigniew Brzezinski, (the Secretary of State under President Jimmy Carter and advisor to presidents from Ronnie Reagan to Obama) who  asserted, “Shortly the public will be unable to reason or think for themselves. They’ll only be able to parrot the information they’ve been given on the previous night’s news.” Despite capitalist lies and misinformation humanity not only learns to fight but also learns to win.

The bombing of the Twin Towers was used as a pretext for the U.S. invasion of Afghanistan. But Uncle Sam’s eyes were on Afghanistan long before September 11, 2001. From 1979 to 1989 Saudi Arabia, conspiring with the CIA, donated one billion dollars for “Operation Cyclone” designed to overthrow the Soviet backed socialist Afghan government. By 1989 the U.S., with the help of Osama Bin Laden (a CIA asset) and the Mujahadeen, succeeded in driving the Soviets out of Afghanistan. They later helped transform the Mujahadeen into the Taliban thinking they would be their loyal partners. This is the same Taliban that became the bitter enemy that defeated them in the recently ended twenty-year war.

We also know that the United States did not go into Afghanistan alone. They were backed by European allies of NATO and sanctioned by a United Nations Security Council Resolution 1386 adopted unanimously in 2001

The U.S. sent over 800,000 military personnel to Afghanistan from 2001 and suffered more than 2,300 casualties with over 20,000 wounded. By conservative estimates they have killed over 500,000 Afghans at a cost of 2 trillion US dollars. This money will balloon to 6.5 trillion by the time it is paid off with interest in 2050.  The fact that a half million people have died proves that this was not a war against a ragtag group of 70,000 international terrorists, but rather a war against the Afghan people waged by the U.S. government conspiring with international imperialism and their corrupt Afghan Jr. partners. America’s war in Afghanistan can only be described as a two-decade long crime against humanity. This crime was committed to gain control of Afghan oil and other strategic industrial raw materials and to funnel profits to the world’s richest people.

IMPERIALISM SNATCHES VICTORY FROM THE DEFEAT OF THE UNITED STATES

While it is clear the Taliban victory marks a defeat for the United States and NATO forces, it should not be confused with a total victory over imperialism. The U.S. defeat does not erase the fact that international arms dealers, multinational corporations, NGOs, and International Security Agencies (mercenaries) benefited enormously from the 20 years of genocidal war in Afghanistan. Much of the 2 trillion US tax dollars spent on this war (about $6,200 per person in the US) found its way into the pockets of CAPITALISTS in the form of arms sales, private security contracts, NGO provided services and programs, construction of bases, roads and technical infrastructure needed to carry out U.S. military operations and aid to the U.S. installed puppet Afghan Government.

Look at the stocks of the five largest defense contractors, (Boeing, Raytheon, Northrop Grumman, Lockheed Martin, and General Dynamics). They got returns on the filthy war economy investments of nearly 1,000 percent. That is, an investment of $1,000,000 produced returns of $100,000,000. Yes, the USA was shamefully defeated in battle, but the international imperialists (whose only objective is to increase their profits), stuffed the bank accounts of the world’s richest people.  The rich got richer! The startling conclusion is that the imperialist war did not serve the United States, but the United States was a servant and instrument of international imperialism. The arms industry was not an instrument of the American military, the American military was and is the obedient lap dog of the international arms merchants, who profit whether America wins or loses the wars it engages in. The people of Afghanistan die, U.S. citizens pay for it and corporate neocolonialists laugh all the way to the bank. In this way Imperialism found victory in the humiliating U.S. military defeat.

IMPERIALISM WILL FIND ITS DEATH BED IN AFRICA

What does all this have to do with Africa and the liberation of African People? The A-APRP understands that African People will only be free when we achieve Pan-Africanism, properly defined as the total liberation and unification of Africa under one scientific socialist government. To reach this objective we must destroy capitalism and imperialism which is sustained by a network of settler colonies and military alliances around the world.  The U.S. being the strong arm of imperialism has an empire to run. Losing in Afghanistan weakened imperialism and its neo-colonial strategy by cutting off access to Afghan resources and reducing its ability to exploit the labor of the Afghan People. Weakened and humiliated, imperialism becomes more desperate and heightens its attack in other parts of the world like Cuba, Iraq, Yemen, the Sudan, Haiti, Syria, and Venezuela. Thus, the defeat in Afghanistan increases the pressure everywhere else.

We, who fight for the freedom of African People, while concerned with enemy strength in Africa must also know imperialism’s world pattern if we are to correctly assess the true dimensions of our struggle. The African struggle against imperialism and neo-colonialism is worldwide, and we must fight wherever the enemy operates. In Africa, this system of military blocs and alliances enables U.S. imperialism to exert de facto  control over the entire continent. The African Command (AFRICOM) maintains a military presence in every African country except Eritrea. In addition, the 800 U.S. bases worldwide extend their influence not only over Africa and the entire “Western world” but also over extensive zones in Latin America and Asia. In other words, imperialism exerts its military might everywhere that Africans live, inside and outside of Africa. This is achieved through a network of spies, police and military installations staffed by two million armed agents actively engaging in genocidal wars against us.

The US defeat in Afghanistan encourages us to wage the necessary struggle to “Get the U.S. Out of Africa.” We do not want foreign military bases in our motherland, and we will never be free, united, and socialist  as long as AFRICOM persists. We are all too familiar with the role played by US Spooks (FBI/CIA), Grunts (Soldiers) and economic hitmen among us. We lost count of the military coups (over 350), assassinations and massive theft committed by imperialism. Not to mention the 100s of millions of African People stolen from the motherland and scattered around the world. Our cry today is for the United States to “Get your bloody hands-off Africa and African People!”  We call all freedom loving people to join us in this commitment.

Maps of U.S. “Enduring” and “Non-Enduring” bases in Africa. The Pentagon defines “enduring” bases as providing “strategic access and use to support United States security interests for the foreseeable future.” “Non-Enduring” outposts — also known as “contingency locations” — are defined as supporting and sustaining “operations during contingencies or other operations.” Contingency locations can be categorized as initial, temporary, or semi-permanent. Images: U.S. Africa Command

NEO-COLONIALISM: THE LAST STAGE OF IMPERIALISM

Neo-colonialism is the final, most dangerous stage of imperialism. Imperialism, through neo-colonialism, has managed to set up a network of military bases and installations all over Africa and assumed military/police control of African communities around the world. They do this to exploit our labor power, rape us of our natural resources and crush our resistance. Our response must be to organize the masses in Africa and the diaspora to drive the imperialists out of Africa once and for all. This can only be achieved through an All-African Political and Military organization and coordination. This will be achieved when  Africans everywhere get organized and understand the international, national, and local implications of imperialism and its ongoing war against African People and all of humanity.

The victory over imperialism in Afghanistan is a great inspiration to African Freedom Fighters worldwide. If the people of Afghanistan can achieve victory over the world’s last superpower, Africans, facing a weakened imperialism, can certainly drive them out of our continent and into the garbage can of history.  If the 38 million Afghans can kick the U.S. Military out yesterday, surely the organized masses of 1.5 billion African People can kick them out of Africa tomorrow. Imperialism will find its grave in Africa!

Our victory is certain! Their defeat is inevitable!

U.S. imperialism will find its grave in Africa!

U.S. OUT OF AFGHANISTAN YESTERDAY! US OUT OF AFRICA TODAY!