You are here: Home / Feature Story / OSPAAAL Workshop at National Conference on Cuba 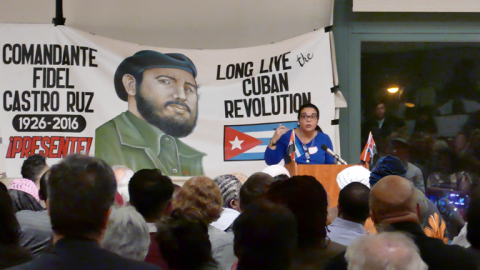 Scene from the National Conference on US-Cuba Normalization in New York, U.S.A. - March 2017

This panel, which was hosted by the All-African People’s Revolutionary Party (A-APRP) discussed the history of the Organization of Solidarity with the People of Asia, Africa and Latin America (OSPAAAL) and the relevance of international solidarity in the struggle against settler occupation in Guantanamo, Standing Rock, and Palestine. Included was Imani Na Umoja of the African Party for the Liberation of Guinea Bissau and Cape Verde (PAIGC) via video conference, Suzanne Aderly of Al-Awda, as well as members of the American Indian Movement.

OSPAAAL was founded in Havana in January 1966, after the Tricontinental Conference.

Video of the Workshop can be seen here: