You are here: Home / Current Events / Only Socialism Will Save Our Planet 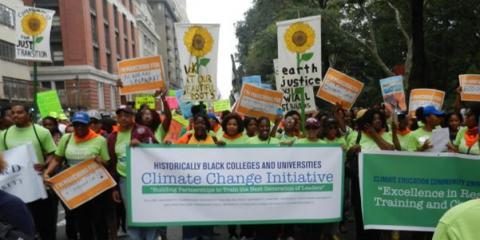 ONLY SOCIALISM WILL SAVE OUR PLANET

Two important characteristics of socialism point to why it is the only process that will avert the march to environmental and human destruction that we are currently on.  First, socialism is a system where people contribute based on their ability and receive based on their labor.  Second, socialism eliminates the type of private ownership that allows individuals to own and control massive amounts of wealth.

Today, under capitalism, the production of non-essential items from racecars to diamond jewelry to aircraft carriers is a drain on the natural resources of the planet and contributes significantly to pollution and climate change.

Under socialism, production is planned to address the needs of the people.  We will define our needs consistent with the capacity of our planet.  This will require a clear understanding of the socialist process that will bring communism to the world.  This starts with recognizing that the stories that associate socialism and communism with totalitarianism, dictators and lack of freedom are all lies.  This necessitates study and collective political education.  Revolutionary political education can lead to a higher consciousness and commitment to humanism.

The second characteristic of socialism means there can no longer be a capitalist class (a 1%) that owns and controls the means of production, the media and politicians.

Today, the handful of people that control the planet’s wealth from the factories and power plants in the USA to the mining rights in South America and Africa are determining the policies that pollute our planet and destroy the environment. They determine policies that result in massive impoverishment and destructive wars, which are necessary to continually extract wealth and resources from exploited countries. The masses of people have repeatedly opposed these policies.  Once the control of production and distribution is in the hands of the 99% we will quickly set new policies that direct the human and natural resources to building a sustainable world free of exploitation.

PAN-AFRICANISM IS A ROAD TO WORLD COMMUNISM

Africa contributes the least to manmade climate change. Yet, Africa will suffer the most due to climate change.  Africa is the most divided continent and the most economically exploited, while holding the largest wealth of natural resources.  The All-African People’s Revolutionary Party (AAPRP) recognizes Pan-Africanism as the total liberation and unification of Africa under scientific socialism.  Pan-Africanism will end centuries of oppression of Africa and African people.  The elimination of borders in Africa sets the example for border elimination globally.  Imperialism thrives on the labor and resources of Africa and African people.  A strong socialist Africa will deliver a crushing blow to the operation of imperialism and lead to the crippling of global capitalism.  At the same time, the resources of a socialist Africa can be devoted to the spread of the socialist process that will lead to world communism.  This will be facilitated by Africa using its resources to assist other areas working toward socialism, and mobilizing the African communities in the diaspora to work with indigenous people across the global south to aid in bringing socialism to all corners of the world.

Under Pan-Africanism, African people can develop a global agenda where addressing climate change, biodiversity and the care for mother earth are given priority.  All justice loving people should support this call for Pan-Africanism.  All African people are called on to dedicate themselves to this call.  The AAPRP is providing political education and organizational training to assist in this process.