You are here: Home / Feature Story / #NoMoreTrump, No More Imperialism, Lift the Blockade against Venezuela! 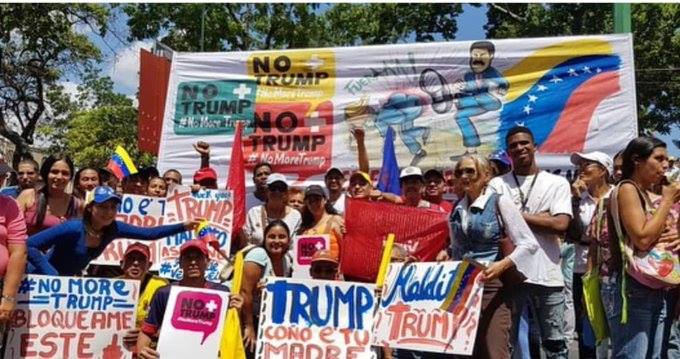 Lift the Blockade Against Venezuela

The All-African People’s Revolutionary Party (A-APRP) stands in solidarity with the United Socialist Party of Venezuela (PSUV) and the Venezuelan People against the brutal blockade and the heightening U.S. led aggression toward the sovereign country, the Bolivarian Republic of Venezuela. Trump’s executive order to “Blockade Venezuela” represents the vicious imperialist nature of United States Empire.

These policies represent the European “settler-colonial” policies that enslaved Africans and slaughtered millions of Indigenous peoples in the European occupations of the Americas.

Blockades are Acts of War

Blockades deny a country’s ability to access basic foodstuffs, medicines, technologies, currencies and normal trade. In the case of the “U.S. Blockade” against Venezuela it is also seizing (stealing) Venezuelan economic assets abroad. This is an attempt to suffocate the Venezuelan people; to make the working- class, indigenous and African descendant families suffer and reverse the gains they made in education, health and housing since the election of Hugo Chavez in 1998 and halt Venezuela’s  aid to its neighbors in medical care, fuel, literacy and reducing infant mortality.

The genocidal weapon of blockades/embargoes against peoples struggling for freedom in the Americas is documented in the historic case of Europeans blockading the Haitian revolution and more recently the 57-year blockade against Cuba. Today the whole world has condemned the blockade against Cuba and more than 75% of U.S. citizens want normal relationships with Cuba. But the Trump administration has not only turned back the minor gains of Cuba/US relations under President Obama but has intensified the attack on all the progressive nations of Latin America and the Caribbean, including Bolivia, Cuba, Nicaragua, and Venezuela. Trump’s administration is determined to turn the cold war tactics of the previous administration into an active war as in the 1980’s when the U.S. and Israel trained and supplied mercenaries to destabilize Nicaragua, Guatemala, and revolutionary forces in El Salvador.

The A-APRP calls on those who believe in peace, justice and dignity to join this campaign against the criminal U.S. blockade of Venezuela. Participate in one of the many demonstrations that are taking place around the world.  Take to twitter ( #NOMORETRUMP ) and other forms of social media to spread the word about this growing resistance movement against those who want to stop the forward march of history. The struggle continues and victory is certain.