You are here: Home / Feature Story / No to the lies! No to the theft, and NO WAR ON IRAN! 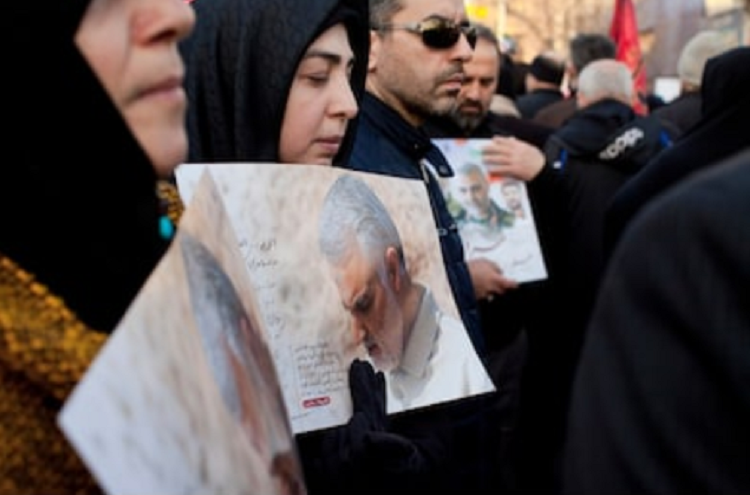 Funeral of Qassem Suleimani on 7 Jan 2020 in Iran, after being assassinated by American drone in Iraq (Source: Saeediex)

Condemns the U.S. Attacks Against Iranian and Iraqi People

The All-African People’s Revolutionary Party (A-APRP) strongly deplores the unprovoked airstrikes at Baghdad’s airport, that illegally assassinated Iranian Major-General Qassem Soleimani, Abu Mahdi al-Muhandis, and others.  These assassinations led the Iranian Republic to attack US troops in two Iraqi Air Bases. Once again the world appears poised for another American war. The unjustified murder by drone, of Iranian Officials in Baghdad, escalated tensions in the region and jeopardizes  the security of the whole world. Paying no attention to the massive call for de-escalation by people throughout the world, the warmongering United States government is determined to wage a war against the people of Iran.

The A-APRP wants African people around the world to understand, “IRAN IS NOT OUR ENEMY!” They are being falsely accused of aggression against U.S. interests and against U.S. citizens. The USA is a murderous international bully that has attacked a nation that is not afraid of bullies.  The Iranians standing up for themselves and defending themselves, does not make them aggressors. A brief look at recent history shows the real aggressor to be the USA, which has been actively trying to control Iran and steal their oil resources for more than ¾ of a century.

History of Imperialist Sabotage in Iran

In 1953 the United States and Britain orchestrated a coup, ousting Iran’s democratically elected Prime Minister Mohammad Mossadegh. Mossadegh was hated in the west because he nationalized Iran’s vast oil industry, using oil revenue for the benefit of the Iranian people. Britain wanted to control Iranian oil and could only do so with a puppet government in place, resulting in the coup which ushered in the illegal dictatorship of the tyrant Mohammad Reza Pahlavi, the hated Shah of Iran.  The Shah was controlled by western business interests and helped the British rob the Iranian people of their oil reserves by way of British Petroleum, (that’s the same BP that disastrously gushed oil in the Gulf of Mexico for four months, killing 11 people, injuring 17 people and poisoning the gulf with nearly 5 million barrels of oil extensively damaging marine life and habitat.)

For decades, the USA lied about playing a role in the coup that put the Shah in power, but eventually publicly acknowledged their role. “The military coup that overthrew Mosaddeq and his National Front cabinet was carried out under CIA direction as an act of US foreign interference, conceived and approved at the highest levels of government.”

Iran is not the aggressor. In collaboration with Israel, Saudi Arabia and Western Europe, the US has meddled in Iran’s affairs for decades, not to stop aggression, not to defend the United States, and not to defend any other nation, but solely to control oil. Simply put, in the eyes of the United States and its allies, all the wealth and all the resources in the world should be at their disposal alone. The USA and Europe do not allow other nations to control their own resources and use them for the development of their own people. The US and Western Europe are imperialist, willing to go to war to steal the resources of Africa, South America and Asia. This is the ongoing racist, colonial relationship that the US and Europe has maintained for centuries. This is what led to the 2019 coup in Bolivia, which overthrew its indigenous President, to gain control of its valuable lithium. This is what led to the ongoing murder of millions of Africans in the Congo to steal its copper, cobalt, diamonds and (most recently) coltan. This why the USA maintains genocidal, immoral and murderous blockades and sanctions against Cuba, Zimbabwe, Iran, North Korea, Venezuela and other places around the world. This is why any nation that doesn’t do what the U.S. wants, will be destabilized, isolated, and eventually subjected to military attack. This, and this alone is why the USA is going to go to war against Iran, and this is why the United States, backed by its allies, have been in a perpetual state of war against the rest of the world for decades. They do not feel compelled to declare war or negotiate peace with nations. Since there are so many US/NATO military installations throughout the world, they are emboldened to strike anywhere, anytime, kill anyone, take anything and control everything.

Citizens of the West Must not be complicit in government crimes

The All-African People’s Revolutionary Party stands for self-determination. We defend the rights of the people of each nation to control their own resources and to defend themselves against imperialist aggression. We are not neutral and stand in solidarity with the oppressed and exploited people of the world. Their problems are our problems. War on the people of Iran is war on the people of the world and war on us. (Do not be fooled, war is always waged against people). We stand with the brave people of Iraq who are demanding that all imperialist, foreign military leave their county.

We stand for Pan-Africanism and demand that all foreign troops and foreign military bases leave Africa’s soil. We stand for indigenous sovereignty, and against American hegemony. The United States of America does not own the world!

American wars of conquest concern all of us. There is no corner of the world that imperialism has spared. We call on you to take a decisive stand—stand up against complacency. We call on our leaders of African nations, leaders of the Caribbean nations, as well as African people worldwide, join with others who have declared no!

No to bloody attacks on innocent people! No to never ending wars that suck up tax dollars while the masses of the people suffer! No to sending our youth off to fight the US filthy imperialist wars! No to the lies! No to the theft, and NO WAR ON IRAN!