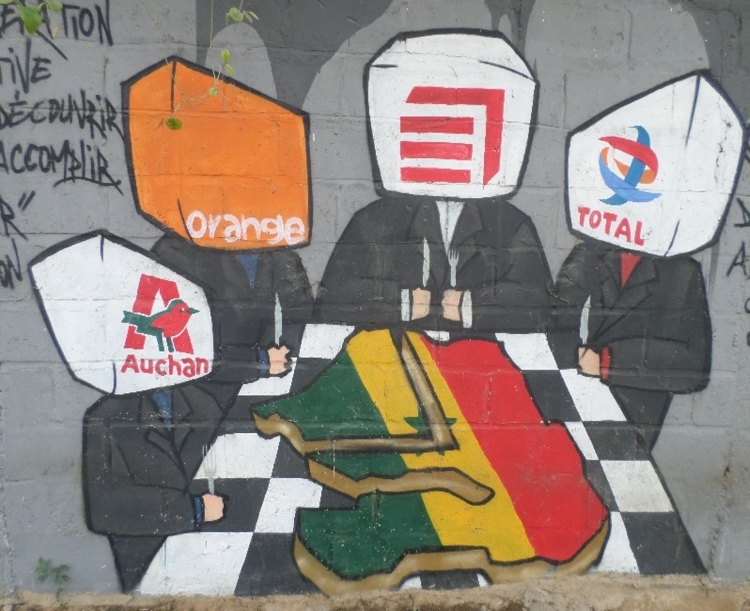 La FrançAfrique: noun. 1) The French neo-colonial system in Africa. 2) France’s Monroe Doctrine like policies that allow it to intervene in African politics to establish governments favorable to the French economy. 3) France’s economic, monetary, military, political, and cultural domination in much of Africa.

People are in the streets in the tens of thousands in Senegal. They do not march only for one particular leader, but instead their unity comes out of ongoing resistance to French colonial rule, and disdain for the political elite who do their bidding. Supermarkets and petrol stations are targets of these uprisings because they are symbols of La FrançAfrique: the neo-colonial system that asphyxiates the Senegalese economy and politically, culturally, and militarily denies the Senegalese their sovereignty.

Sixty years after independence, Senegal remains a country owned, stolen, and controlled by France. The hotels, the roads, the gas stations, the supermarkets, the Wi-Fi, the phone services, the television provider, the port, the military base, the currency. Meanwhile, the United States operates with its military command, U.S. Africa Command (AFRICOM), firmly anchored on African soil. In addition to the rapid expansion of US military forces in Africa over the past decade, France remains an imperial power across the African continent. The former colonizer treats much of West and Central Africa as its “pré carré” or backyard and, just as it was during the formal colonial period. Dakar is where the European country headquarters its African empire. If one is to understand the protests in Senegal right now, or any facet of political or daily life in the country, one must understand Senegal’s colonial reality.

Borrowing from the Antiguan author Jamaica Kincaid’s narrative tools or Thomas Sankara’s question “Where is imperialism? Look at your plates when you eat”: imagine that you are a tourist visiting Dakar.

If you visit Dakar, and you have no close family or friends, where do you sleep? While French owned hotels and resorts are not the only option, they are perhaps the most widely available or most advertised and accessible. You wake up early from one of these hotels and set out to find an ATM from which you can withdraw money. You search among the nearest banks, and you have a few options nearby. Of Senegal’s three largest banks, two are owned by France, Société Générale Sénégal and BICIS, a subsidiary of the French bank BNP Paribas. On your way from BICIS you decide to grab some snacks to bring with you for your long day ahead.

You are told that the cheapest and most convenient place to grab snacks is at a supermarket called Auchan. Conveniently, Auchan seems to be on every major intersection in Dakar and in every medium-to-large city across the country. You notice some people in front of the supermarket wearing shirts that say “Boycott Auchan” but you are not sure why. You have chosen to shop at a French-owned supermarket that is underselling the local Senegalese markets. It is rapidly expanding, cementing itself as the go-to food market in the country.  Along with snacks you think to buy a sim card for your phone. The telecommunications and internet company that reigns supreme in Senegal is the French-owned company Orange. Even Sonatel, the local Senegalese telecommunications company,  is directed by Orange which acquired a 42.33% controlling stake in 2006. You set up your phone and then hail a taxi.

The French Business of Bloodshed

Your taxi stops for gas at the number one gas station in Senegal, the French owned station Total, the result of a merger with Elf-Aquitaine, a French oil company that embroiled the political and economic elite in corruption scandals. The Paris-based merger is infamous for committing horrors across Gabon, the Congo, Cameroon, Angola and Nigeria. Among Elf Aquitaine’s bloody legacies are the overthrow of governments and major arms sales to fuel civil war. Once your taxi’s tank is full, you start on your way out of the city limits. As you exit Dakar you slow down as every car stops to pay money at a toll booth. The only way to leave Dakar is via this toll road that is owned by the French company, Eiffage. They have somehow secured some of the biggest contracts for Senegal’s new infrastructure projects. Eiffage carries out major works in construction, electricity, energy, roadwork, and maritime industry. You hand the fare to the taxi driver, who passes it on to the uniformed booth worker. The two greet each other, knowing that little, if any, of that fare is destined to the country. Unbeknownst to you, more of your money goes to yet another private French enterprise.

At some point you passed by the Port of Dakar, and later saw a sign indicating the Ro-Ro Terminal. Were you aware that it is owned by the French company Bolloré? French billionaire Vincent Bolloré has been embroiled in legal battles over corruption and political scandals in Togo and Guinea.

All day long you have been paying for things with the CFA franc currency, a currency used by 14 countries in Africa. Those “sovereign” nations are required to hold at least 50% of their national reserves in the le Trésor public français (French Treasury) in Paris. The currency has a fixed exchange rate anchored to the Euro, and it is the French government that has historically determined the value of the money relative to the Euro. France also holds veto and voting power in the Central Banks of West and Central Africa. To complete the circle, through this system, France is able to determine the value of these African countries’ exports and the price that they must pay to import goods. France ensures itself access to raw materials and resources at a devastatingly favorable rate.

When you return home, wherever that is, will you remember the graffiti you saw from your taxi window? The words, France Dégage! (France Get Out!) and La France tue le Sénégal (France is killing Senegal) spray-painted in every neighborhood you drive through. Now, the people march, facing French trained police and soldiers who have left the French military base in Dakar to crush all dissent. The majority has never accepted this and never will. Senegal still suffers the brutality of La FrançAfrique, French occupation and colonization.