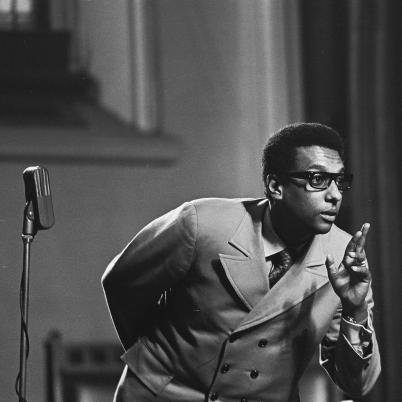 Kwame Ture was a magnificent communicator in the same league as skilled orators such as Malcom X, Thomas Sankara, Jean Bertrand Aristide, Fidel Castro and Tajudeen Abdul Raheem – who could speak at great length without notes and with amusing wit. Here is a selection of video and audio clips that attest to this

In this powerful short clip, Kwame Toure speaks about the critical role of understanding African history in Black liberation. The history of all Black people begins in Africa. That history has been suppressed by the capitalists.

This clip opens with an energetic and humorous Kwame Ture speaking at a 1966 rally in Los Angeles as chairman of the Student Nonviolent Coordinating Committee. The speech is followed by a moving, wide-ranging 1998 interview where Kwame at 56, battling prostate cancer, with “death lingering over our heads”, looks back at his life as a “guerrilla” and reflects on his “last days in the struggle” for African liberation. Click here.

The following video clip entitled comprises a 10 mins introduction; a 50 mins lecture by Kwame Ture and approximately a 30 mins question and answer session with an African American audience.

Kwame Ture talks on a range of issues including the destructive systems of capitalism, imperialism, zionism and neocolonialism. He ends with the declaration to his audience that: ‘Until Africa becomes strong we’ll never be strong. As Africa gets strong we get strong. We cannot build in America. We must seek to destroy the American capitalist system and build a socialist system in Africa.’ Click here.

In this short audio (3.45 mins) Kwame Ture declares that ‘revolution is based on truth and justice’ and also on land. For Africans in the diaspora that land base is Africa, the richest continent in the world.

In this video of 1:30: 48 in length entitled ‘Kwame Ture Converting the Unconscious to Conscious’, Ture analyses not only the necessity of the conscious to make the unconscious ‘consciously rebellious’ but he distinguishes between the differences between a mobiliser and an organiser with his usual wit and depth of clarity.

In this video clip Kwame Ture discusses the importance of Afrikan culture and how it has resisted enslavement. In the development of a revolutionary culture, Ture insists that culture must also be anti-capitalist in nature because it was capitalism that halted Africa’s development.

In this short video (4.44 mins), Carmichael celebrates the birthday of the Black Panther Leader, Huey P. Newton. He links the need for black people in America to see themselves as connected to black people globally as critical to their survival.