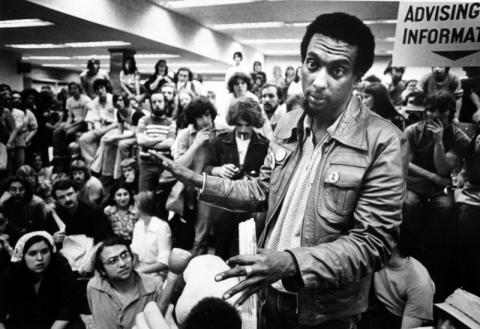 Kwame Ture embodied the revolutionary African personality in his thought, actions and physical attire. He was passionately committed to overturning the systems of imperialism, capitalism, neocolonialism and Zionism that continue to subjugate African people around the world

We feel our people’s pains and suffering and are determined to end it. In our honest efforts to end our people’s suffering, we channel our energies to transform our society with social revolution. As described by Osagyefo Kwame Nkrumah, every true revolution is a program. The first thing necessary is to accept that principle, with its development confined to women and men who are believers in it, and emancipated from every tie or connection with any principle of an opposite nature. Similarly, Ahmed Sékou Touré instructs us that the Revolution must be led by those who are faithful to its line, carrying it out in democratic structures. Comrade Kwame Ture did this and continues by being a worthy model to emulate in implementing the program of the revolution. He committed class suicide and was reborn as a revolutionary worker. As revolutionaries never die, Kwame Turé continues to organize.

Pambazuka’s special edition dedicated to Kwame Ture offers an opportunity to present a cursory view into who he is and what he represents. Surely, it will serve as a spark to vitalize further analysis including; books, seminars, essays, forums, research papers, debates, studies and references casting Kwame Ture more profoundly into history’s eternal forward march, as an example of the ‘new African’? For this edition, our modest article attempts to summarize the example of Kwame Ture, from our perspective in terms of what he set out to do for the African World; what he actually did and what remains for us to do. We give more emphasis to the last 30 years of his life and organizing work in Africa, than we do to the first 27 years prior to setting up base in Conakry.

Emulating the example of Kwame Ture, honestly, faithfully, courageously, and as meticulously as a scientific formula, will result in no less than the end of the suffering of our exploited people in addition to infinite positive material benefits for Africa and humanity. If we dare to be like Kwame Ture, our example will organize and multiply. As Comrade Kwame often says; ‘organize by example and your example will organize.’

Eventually, the multiplication of the ‘Revolutionary African Personality’ will result in more efficient mass revolutionary parties and reach a dialectical moment with the forces of tension producing a fundamental change in ethics resulting in what we call ‘revolution’, where the people take ownership of the means of production and its distribution and take history (and consequently, culture) into their own hands. (See Amilcar Cabral, Fundamentals and Objectives of the National Liberation Struggle in Relation to Social Structures, also known as ‘Weapon of Theory’).

The inevitable first step is to collectively study Kwame Ture’s writings, speeches, and particularly A-APRP minutes’ of meetings reflecting his more than 40 years of contributions. Secondly, imitate and improve upon them in practice. Thirdly, reproduce yourselves, so that there are many Kwame Tures.

The fundamental challenge in emulating Kwame Ture is emancipating ourselves from every tie or connection with any principle of an opposite nature of the revolutionary program; giving our all to our people.

Developing upon the mass organizing culture (reform theory) already acquired while in SNCC, where he had already ‘returned to the source.’ Kwame Ture was destined to integrate into the living conditions of African people in Guinea-Conakry, (where he resided and organized for almost 30 years; 1969 – 1998), first at the high level of the party-state leadership and later at the grass roots of the PDG-RDA (Democratic Party of Guinea – Democratic African Revolution), simultaneously, onto other areas in Africa where he made working visits. At the ‘source’, he developed our scientifically correct ideology, (revolutionary theory) faithfully interpreted from the living conditions of African People. It behooves Humanity to learn from this.

His independent thought and action on Pan-Africanism, revolution and culture were not invented by him, but were passed on from others, such as Osageyfo Kwame Nkrumah, Ahmed Sékou Touré, Amilcar Cabral, and others whom he had physical contact with; and from systematically studying revolutionary theories in Cadre Circle, (work and study groups). He remained faithful in passing onto others that which was passed onto to him. (For more information on what an A-APRP Work-Study is, click this link.

Comrade Kwame Ture often reminded us that he was not a ‘speaker’, but rather an organizer.’ His interpretation of revolutionary Pan-Africanism for the people is not only unity, but as well the total liberation of Africa with scientific socialism controlled by a mass revolutionary party. It will only be achieved by working among the people. First, the political milieu must be developed. From the ground swell, mass recruitment will provide the mass character of the party. As the sine-qua-non pre-condition, the masses of African people must become self-conscious revolutionaries organized into this permanent mass revolutionary party, where the bases of the party serve as the centralized entities for self-conscious conceptions and decisions, with implementation and consolidation carried out via the democratic centralists structures up to the central level where they are then imposed on the state apparatus from the top to the bottom – until the point when the state becomes absorbed by the people – ‘people’s state’ at the level of the bases themselves (replacing the role previously carried out by central structures). Obviously, this pre-supposes that the people’s revolutionary party controls state power. The manner (strategies and tactics) of obtaining state power depends on the time and the space, but the vehicle is the people (masses) organized; the best vehicle being the people’s Pan-Africanist revolutionary mass party, to conduct the people’s struggle by the people.

This is precisely what lacks other ‘activists.’ They spend more time criticizing political parties than they do actually studying and contributing to these people’s organizations. It is easier to find a sister or brother now sitting on the sidelines criticizing saying that they supported (emphasis on past tense supported), this or that anti-colonial movement in the 1960’s or 1970’s, but not now ‘because the party became corrupt.’ The result is that both become isolated – the organization and the ‘activist’ (or ex-activist). This only aids the enemy. Comrade Kwame’s position is to work in these parties to establish the ‘All-African Committee for Political Co-ordination’ (A-ACPC) which will assist the formation of the A-APRP (see below). The author of this essay is one of those continuing to do exactly what Comrade Kwame incarnated. We work 1440 minutes per day in the PAIGC – the People’s Pan-Africanist Revolutionary Mass Party at the level of Guinea-Bissau.

Comrade Kwame’s position is that the highest form of organization is the political party. The most efficient political party for people’s power is the mass revolutionary political party, where its militants have power at the base, (conception, decision, implementation and consolidation).

Kwame Ture didn’t just rhetorically say ‘Ready for the Revolution’ – he walked his talk. He made Revolution! He contributed to the building political parties that are still vibrant today and will inevitably become stronger in the future.

When Osageyfo Kwame Nkrumah gave Kwame Ture the manuscript of the Handbook of Revolutionary Warfare, (to download a copy, click) he absorbed it and made the strategy contained in the section entitled: ‘The Need for Co-ordinated Revolutionary Action’ (page 56 – 57), his eternal life’s main mission:

‘…POLITICO-MILITARY ORGANISATION
The following measures should be taken:
1. The formation of the All-African People’s Revolutionary Party (AAPRP) to co-ordinate policies and to direct action.
2. The creation of an All-African People’s Revolutionary Army (AAPRA) to unify our liberation forces and to carry the armed struggle through to final victory.

The formation of a political party linking all liberated territories and struggling parties under a common ideology will smooth the way for eventual continental unity, and will at the same time greatly assist the prosecution of the All-African people’s war. To assist the process of its formation, an All-African Committee for Political Co-ordination (AACPC) should be established to act as a liaison between all parties which recognise the urgent necessity of conducting an organised and unified struggle against colonialism and neo-colonialism. This Committee would be created at the level of the central committees of the ruling parties and struggling parties, and would constitute their integrated political consciousness…’

He worked tirelessly to create the milieu and construct the A-APRP, but was not its founder. See video -The A-APRP was co-founded by Kwame Nkrumah and Amilcar Cabral. Kwame Ture developed into one of its co-pilots.

(Kwame Ture is 5th from left standing with A-APRP cadre from Sierra Leone, Senegal, Guinea-Conakry, Guinea-Bissau and Ghana, at the PDG-RDA Headquarters, January 1997)

Kwame Ture returned to the source; a source of energy arming our ideology and inspiring us as we intensify our relations with parties in Africa and the socialist world, working to completely liberate all the productive forces in the African world and humanity; a criteria for our own class struggle and a self-conscious measuring stick.

1) Work for the People every day, as a humble servant developing the Mass Revolutionary Pan-Africanist Party;
2) Study collectively with a passion and contribute towards the development of Philosophical Consciencism (ideology for decolonization);
3) Give the EXAMPLE of the Revolutionary African Personality (RAP) in PRACTICE.

In one line – always remain READY FOR REVOLUTION!