You are here: Home / Feature Story / Kwame Ture Opening Statement at the founding of the World Wide African Anti-Zionist Front 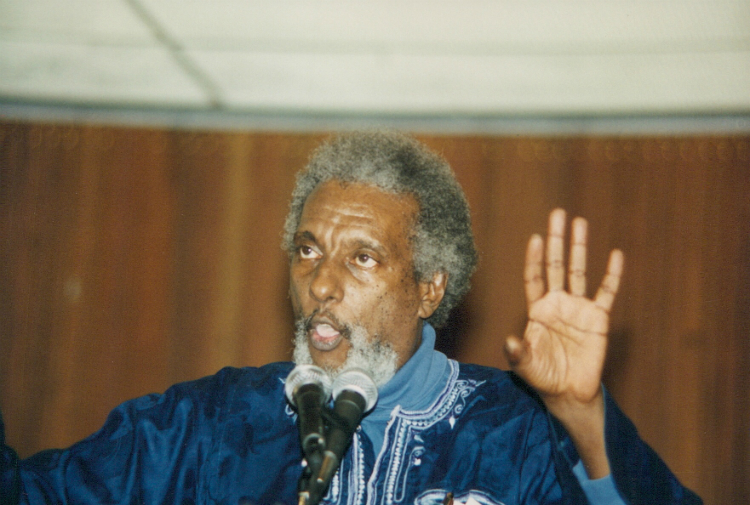 [The following address was given by Ancestor Kwame Ture during the founding convention of the World-Wide African Anti-Zionist Front (WWAAZF), held in Tripoli, capital of the Socialist People’s Libyan Arab Jamahiriya in June 1991]

On behalf of the African Anti-Zionist Front of the United States of America we are honored to greet you. We know you are pleased that we meet in a liberated zone of Africa. This meeting is possible only because of the mass courage of our sisters and brothers in the Socialist People’s Libyan Arab Jamahiriya. Throughout our continent, the ass courage is ruthlessly suppressed by the neo-colonial puppets placed in power. We are truly grateful to the wise leader of the Great Al-Fateh Revolution whose role in bringing forth this mass courage is indisputable. One thing which cannot be questioned about Socialist People’s Libyan Arab Jamahiriya is her commitment to worldwide struggle for justice. Thanks to our brother-leader, the Socialist People’s Libyan Arab Jamahiriya is most serious of its support to African Liberation Movements, setting a sterling example for the Organization of African Unity, its open support for African Revolutionary forces makes it a haven for African Revolutionaries.

The Socialist People’s Libyan Arab Jamahiriya is not only for the natural place for any Anti-Zionist meeting, but for the African Anti-Zionist Front it is the perfect place as Africa’s role as peacemaker and fighter for justice must be constantly reaffirmed. Africa’s great contribution to world religions imposes a moral obligation to struggle against Zionism which seeks to use religion, the most sacred of systems to divide humanity. Africa gave refuge the most sacred of systems to divide humanity. Africa gave refuge to Jesus Christ (Peace Be Upon Him) and the disciples of the Prophet Muhammed (Peace Be Upon Him); Africa gives refuge to the Palestine Liberation Organization (Victory Be Unto Them). The Revolutionary Instincts of the masses of our people which manifested itself in spontaneous struggle must be transformed with a view to organized protracted struggle. This Revolutionary potential which constantly grows must not be underestimate. Africa as a continent in 1973 broke relations with the Zionist entity, and in spite of all forms of pressure by Zionism and U.S. imperialism, the majority of African states though overwhelmingly neo-colonialist, maintain this position in fear of our masses. A qualitative leap over the decision to break relations with Britain during the struggle for an independent Zimbabwe. The consciousness of our masses is ever rising!

Everyone knows that Zionism is the enemy of Palestine and the Arab people in general. Many think that Zionism is not the direct enemy of Africa and therefore Africa’s struggle is relegated to a supportive role. We conscious Africans know that Zionism is Africa’s direct enemy! War against Egypt is war against Africa; when you shoot down a civilian Libyan airline you shoot down an African airplane; when you commit murder in Tunisia, you murder in Africa; when you invade Uganda, you invade Africa; when you work with the racists in Azania/South Africa, you aid African oppression; when you attack African Revolutionary Movements in the diaspora, you attack Africa. The Zionist entity has always been against Africa. In 1952 It was against Tunisian Independence and in 1956 and 1958 voted against self-determination for Algeria, voted for British sovereignty over the Suez etc, etc, etc. Thus, an African Anti-Zionist Front worldwide is just a just response to unjust attacks.

That the African Anti-Zionist Front should start in the U.S.A. is not abnormal. The U.S.A. is one of Zionism’s strongest bases, and Africans in the U.S.A. are the most revolutionary instinctive group. For Zionism, control of their political movements is essential. Thus, the dialectics of the struggle. The organized African masses will play a vital role in smashing Zionism. In the U.S.A. everyone knows that Zionism controls elected officials. In all of the U.S.A. only one candidate has been able to attack Zionism and get elected and that is the African congressman – Gus Savage, representing the African community in Chicago!

This African Anti-Zionist Front will lead to a Worldwide Anti-Zionist Front. Africa will be able to bring her collective Revolutionary weight to this worldwide formation and play her proper role in fighting for world peace.

Daughters and sons of Africa, we in the African Anti-Zionist Front do not just seek unity of action against Zionism but we must also seek unity of thought to strengthen Pan-Africanism. We know in the world today we can find many who call themselves anti-imperialist, anti-capitalist, anti-racist but are not Anti-Zionist. However, when one is Anti-Zionist, one is automatically anti-imperialist, anti-capitalist and definitely anti-racist. We are extremely honored to be in this room, because we know without the slightest arrogance that we are amongst Africa’s most conscious organizers. We have a responsibility to Pan-Africanism. We must ensure its Revolutionary Integrity. This is our sacred duty. Especially today when everywhere imperialist forces are trying to make Pan-Africanism reactionary. Thus, our meeting here will come to put a strong pillar for Pan-Africanism. By our actions we will make it crystal clear that one cannot be a Pan-Africanist unless one is Anti-Zionist. And through our actions in the Anti-Zionist Front we will push to make a reality among worldwide progressive forces, that one is not progressive if one is not Anti-Zionist.

African warriors, Zionism is an effectively organized worldwide fascist system. Only through effective worldwide organization will it be smashed. We have been separately fighting this beast. You get quality by critically organizing quantity. Thus, the Africa Anti-Zionist Front has already begun on a qualified footing. Integrating our independent fighting forces into a unified command giving us greater strength ensuring devastating blows, making it easier to Smash Zionism

Victory is Ours! Comrades we thank you and as always, we are Ready for the Revolution!!!