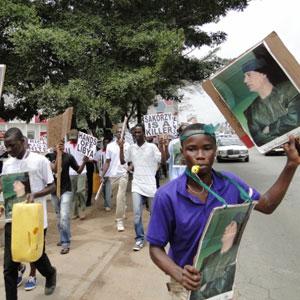 Africans from around Africa were living in Libya

The Socialist People’s Libyan Arab Jamahiriya (revolution) persistent, consistent effort to forge an All-African union government has perhaps terrified imperialists more than anything else popularly associated with that country. In terms that are explicit, Libya has repeatedly emphasized that it shares the Pan-African objective articulated by Osagyefo Kwame Nkrumah. But even more significant is that Libya’s commitment to African unity has not been limited to macro-governmental theories and rhetoric. At a time when some African countries had become increasingly xenophobic, Libya embraced Africans from all countries and in true Pan-African spirit welcomed them as residents and workers.

In Africa, an open door/open border policy is potent, and from the perspective of imperialism much too dangerous. It is for that reason that imperialist nations (France, Italy, England, etc.) have no doubt been very pleased that in the course of the illegal, immoral war that has been waged by NATO against the Jamahiriya, reactionary, racist elements within (and without) Libya have embarked on a genocidal campaign of “ethnic cleansing” aimed squarely at so-called “black” Africans who are presumed to have migrated from other countries. This is not a matter of speculation. Many of these forces call themselves “The Brigade for Purging Slaves, Black Skin.” They have reportedly engaged in horrific public killings and mass detentions.

Although for strategic reasons, the capitalist press has maintained a well-coordinated conspiracy of silence about these events, the gravity of these developments has been so profound that the news has leaked out in bits and pieces — even through major media outlets. For example, the BBC interviewed a Ghanaian who was working in Libya. While hiding in Benghazi, he told a reporter:

“We left behind our friends from Chad. We left behind their bodies. We had 70 or 80 people from Chad working for our company. They cut them dead with pruning shears and axes, attacking them, saying you’re providing troops for Gadhafi. The Sudanese, the Chadians were massacred. We saw it ourselves.”

In an interview conducted by the Los Angeles Times, an elevator maintenance man explained:

“Nothing is safe in Tripoli for us anymore. It used to be beautiful here. We had chances we didn’t have at home. We could move up, not down. But now it’s crazy, full of guns and bombs.”

To mask their racial motives, the imperialist collaborators have asserted that Africans from other countries were either recently brought into the country as mercenaries, or they are elements of the Jamahiriya’s security and military forces. Allegations that these Africans are “soldiers of fortune” are unsubstantiated. Many work as laborers. What’s more, during the early phases of the assault on Libya, the Libyan government proved that it didn’t need mercenaries when it reportedly distributed more than a million weapons to civilians at random providing dramatic proof of its faith in the patriotism of the Libyan masses and their commitment to the Jamahiriya. Nevertheless, to the extent that Africans from other countries have been invited to participate as members of high level security units and the military, this is but further evidence of Libya’s genuine commitment to Pan-Africanism. Unlike reactionary regimes that limit government authority to a select few, Libya’s actions demonstrate a recognition that Africans are Africans regardless of their place of birth, and that all Africans have a role in the defense of the continent’s integrity.

There should be no surprise in the fact that imperialism is highly sensitive to the Pan-Africanist practice of the Jamahiriya. Africa’s enemies are in some ways more consciously aware of the potential of Pan-Africanism than many of those of us who are part of the African World. There is an ongoing determination by imperialist forces to crush even the slightest moves toward genuine African independence and unity, and for that reason wars against Africa are inevitable, and revolutionaries must take that in stride. Even more inevitable is the triumph of Africa’s people over the continent’s enemies, and that must be remembered always even in the face of assertions to the contrary by the capitalist media.