You are here: Home / Archives / Imperialists Will Reap What They Have Sown! 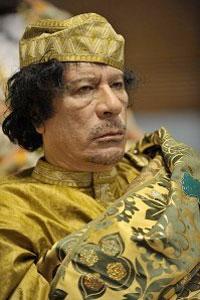 How would you feel about this intrusion into your family life? How would you react to such a home invasion? Do you think you would feel outraged and compelled to fight?

Let’s apply the scenario above to the invasion of Libya. On October 20, 2011, the global Pan-African nation suffered a devastating blow and heart wrenching loss when the demonic NATO forces conspired with rebels loyal to the National Transitional Council (“NTC”) to capture, terrorize and brutally murder a great son of Africa, Brother-Leader Muammar Gaddafi. When the next phase of Africa’s anti-imperialist history is written, this single barbaric act will immortalize Brother-Leader Gaddafi as a great Pan-African leader who demonstrated through words and deeds that he was committed to building a unified socialist Africa.

The All-African People’s Revolutionary Party strongly condemns US imperialist-led NATO and its creation, the NTC for the brutal assassination of Brother-Leader Muammar Gaddafi under the deceitful guise of protecting the human rights of Libyan citizens. While we mourn the physical loss of Brother-Leader Gaddafi we are more determined than ever to play our historical role to deliver the final death blow to the most evil system in the annals of human history – US-led imperialism!

The vicious hypocrisy of the United Nations in general and Security Council in particular have not escaped our notice as they commemorated a so-called “International Year for People of African Descent” as thousands of Africans in Libya were murdered by NATO forces, and the UN stood silently by expecting the world to continue to believe that it is committed to maintaining peace and security among the international community.

The imperialists will reap what they have sown. Following a protracted anti-Gaddafi propaganda campaign, the blood-thirsty imperialist pigs and their spineless lackeys in the NTC in league with local opportunistic Libyan individuals, finally achieved the sadistic pleasure of murdering one of Africa’s great Pan-African leaders. Brother Gaddafi’s brutal, public execution (broadcast by “civilized” western media outlets like CNN, BBC etc.) is painfully reminiscent of the assassination of then Prime Minister Patrice Lumumba in the Congo in 1961.

While we honor Brother Gaddafi and celebrate his outstanding contribution to Pan-Africanism we can use dialectics to learn valuable lessons from this tragic situation. The lessons are as follows:

Dialectically, all genuine Pan-Africanists know there is a positive side to even this assassination of our great Brother-Leader Gaddafi. We know that this assassination is an assault on our collective dignity. We will honor the mammoth contributions of Brother-Leader Gaddafi, lay his remains to rest and intensify our just struggle to achieve a unified socialist Africa. The only reason that Libya was vulnerable is because African people have not yet achieved political and economic unity.