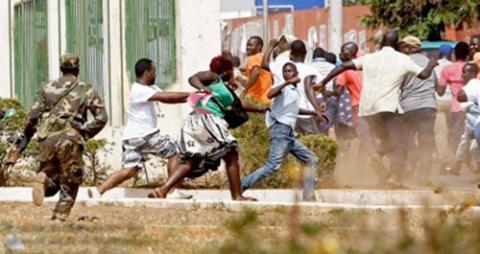 A coup d’état (or “coup”) is an effort to seize political power. Kwame Nkrumah explained that coups often occur when “…imperialism and its internal allies, being unable to defeat the socialist revolution by traditional methods, have resorted to the use of arms.”

In the case of Guinea Bissau, plotters targeted the African Party of Independence of Guinea and Cape Verde (PAIGC) and sought to prevent run-off special presidential elections that were scheduled for April 29, 2012. In response, Guinea Bissau’s trade unions, women’s organizations, youth organizations and social organizations defied the military’s orders to terminate all strikes and public and private radio broadcasts. The people persisted with strikes and took to the airwaves and the streets in mass demonstrations.

Even though the people’s struggle against the coup has been unrelenting, unfortunately, with the assistance of U.S. imperialism and neo-colonial forces in Africa, the coup leaders have not only maintained their control, but they have also carried out a campaign of repression against the democratically-elected leadership of the PAIGC and the party’s supporters, friends and allies.

The effects of a coup like this one are far-reaching. In Guinea Bissau itself, the democratic process has been interrupted, and in the absence of a peaceful, orderly, government transition, there is both tremendous uncertainty and a destabilization of civil society. In the wake of a coup, neighboring countries also become very nervous because of concerns that protracted instability will result in a flood of refugees and cross-border armed conflicts that will in turn wreak havoc throughout the region.

The impact of a coup is not limited to the country and the region where it occurs. The entire African continent suffers. In an effort to make Africa autonomous and powerful, there is an ongoing struggle to integrate the continent’s political structures and economies. This can only happen when there is mass democratic engagement in the continent’s governance. A coup is inherently undemocratic, and when one occurs it becomes a crippling infection that stifles Africa’s healthy political development. A coup can also cause unnecessary economic devastation.

The far-reaching impact of a coup can also be seen in Mali where a military takeover not only triggered chaos in the country’s northern regions but also the Economic Community of West African States (ECOWAS) and the governments of neighboring Algeria and Mauritania expressed worries about regional destabilization. Just weeks before Mali’s national elections, military personnel announced their control of the country over state television. Fighting broke out in the capital, Bamako, and several governmental ministers were arrested along with the country’s president, Amadou Toumani Toure. In the meantime, rebel soldiers loyal to the coup leaders, wasted no time in looting the capital.

The article The Militarization of Africa exposes the hidden hand behind the coup d’ états in Africa.

The following recommended reading provides a foundation for understanding the current reality in Africa.

For more information on coups d’état sponsored by the U.S. and other foreign powers, see: