You are here: Home / Women / Honoring Our Ancestors – Titina Silá 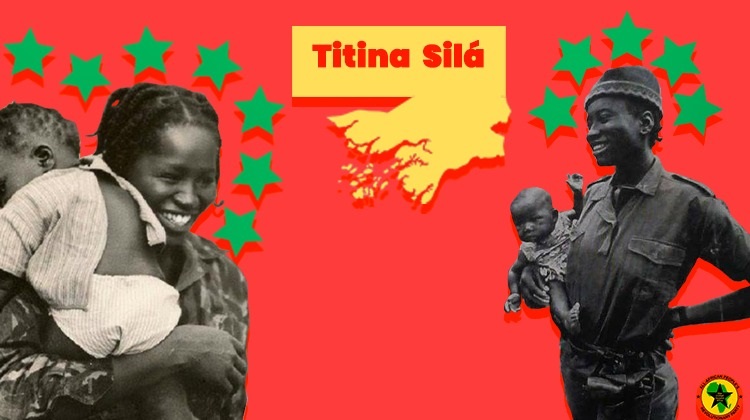 Beloved daughter of Africa, Titina Silá, was a resolute and relentless freedom fighter for the liberation of Guinea Bissau from Portuguese colonialism.

Born Titina Ernestina Silá in 1943, she spent her lifetime living under colonial domination, and grew up witnessing first-hand, the brutality and degradation of colonization. But Silá chose resistance, so, at 18 years old when she was approached by mobilizers for the African Party for the Independence of Guinea and Cape Verde (PAIGC), she made the life altering decision to become a freedom fighter in the war of independence.

Silá’s dedication and bravery resulted in her being placed in charge of many important operation that were vital to the progress of the war effort, including distributing literature among the people, facilitating communication between local peasants and PAIGC mobilizers, recruiting people to support the liberation movement, leading the People’s Militia Committee in the North, organizing the movement of people and goods for the supply of resistance troops, and finally training as a guerrilla and engaging in combat.

During the time that she served in the struggle, Silá married another comrade and had two children. But sadly, she wouldn’t live to fulfill the role of mother. In a terrorist act of cowardice, the Portuguese military ambushed Titina Silva and some of her comrades, while crossing the river to attend the funeral Amilcar Cabral, whom the Portuguese had assassinated days earlier. Tatina Silá was killed on January 30, 1973, at the age of 30.

Titina symbolized the kind of woman that PAIGC is trying to produce. Strong enough to withstand even the kind of test that the north front presented, she was always able to find a solution to the most difficult problem. She had natural leadership qualities and the people responded to her because she was neither selfishly demanding nor authoritarian. Everybody loved her. …. She was always willing to sacrifice herself for the struggle and that is how she died. She was someone formed by the revolution and who had attained the ideal of what the Guinea-Bissau woman should be.” — Friend and comrade Francisca Pereira memorialized Silá with these words.

Today the date of her death is celebrated annually as National Women’s Day in Guinea Bissau. Many structures bear her name, a name that will forever inspire future generations. Revolutionary comrade Titina Ernestina Silá has earned an esteemed place in in the history of Africa and in the hearts of African people worldwide.