You are here: Home / Women / Honoring Our Ancestors – Ida Gibbs-Hunt 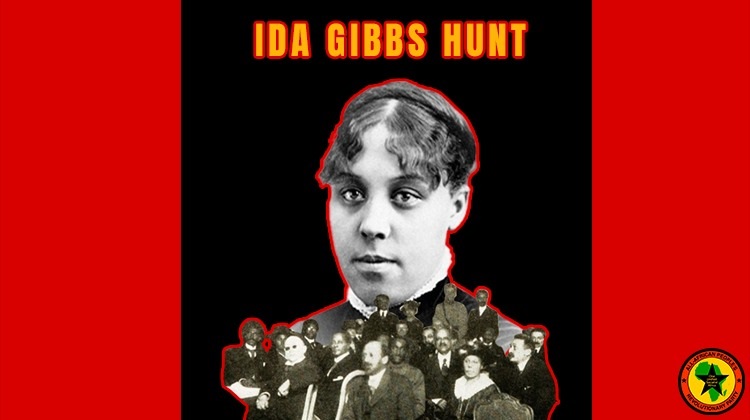 Our sisters’ names often drift into the shadows of history, despite their pivotal role in our people’s liberation. So, we take a moment to shine a light on our sister, Ida Gibbs-Hunt, a Pan-Africanist who spent her life struggling for African people.

On November 16, 1862, Ida Gibbs was born in British Columbia, Canada into an unjust world, plagued with enslavement, colonialism, racism, sexism, and other forms of human degradation. As the daughter of a very wealthy judge, Gibbs-Hunt could have surrounded herself with privilege and luxury and ignored the oppression around her, but she chose a different path. Gibbs’ family was able to provide her with exceptional educational opportunities, which she used to serve her people. She believed strongly that privilege brought with it the responsibility to work toward the emancipation of humanity in general, and African people, in particular. This sense of responsibility led her to work as an educator, an author, a translator, a speech writer, a public speaker, and an activist; tirelessly promoting education, civil rights, women’s rights, peace, and disarmament, and ultimately Pan-Africanism.  In 1904, Gibbs’ married diplomat William Henry Hunt, and travelled with him to Liberia, France, Madagascar, and Guadeloupe for his diplomatic assignments. It was this experience that she credits with expanding her scope and perspective on international justice issues. It was this experience that increased her knowledge of Africa and of
colonialism, leading her to ultimately struggle for Pan-Africanism. This marked her most significant contribution to African people worldwide.

Gibbs-Hunt helped to organize and even participated in several Pan-African Congresses. And while many notable men are recognized for their role in Pan-Africanism, women like Gibbs-Hunt worked just as hard—often side-by-side, but without the recognition. She is credited with inviting DuBois to go to France where she introduced him to Blais Diagne who in turn was able to arrange for France to host the 1919 Pan African Congress.

She was fluent in French and had lots of political connections. She was also capable of strong organizational work, all of which caused W.E.B. DuBois to rely on her assistance in the planning and implementation of the Congresses. Gibbs-Hunt acted as the primary translator at the 1919 Paris Pan-African Congress, she co-chaired the Executive Committee of Third Pan African Congress held in London in 1923, and she  delivered a rousing address, entitled “The Colored Races and the League of Nations”. She even donated money when needed to ensure the Congresses’ success.

In the article, “The Women of Négritude”, written for the blog, Journal of History and Ideas, author Sarah Dunstan, states that “Ida Gibbs… was part of the first Pan-African Association executive committee formed in 1919 at the Pan-African Congress in Paris. DuBois never mentioned her in his write-up of the Congress in the Crisis, nor does she appear in any media reports. Yet a personal letter that DuBois sent to Hunt…suggests that she was, in fact, heavily involved in its organisation. In addition, correspondence appearing in the DuBois Papers…suggests that [she]… played a mediating role in maintaining fragile diasporan relations.”

We thank you, Comrade Sister Ida Gibbs-Hunt, for your uncompromising contribution to Pan-Africanism!