You are here: Home / Women / Honoring Our Ancestors – Hannah Kudjoe 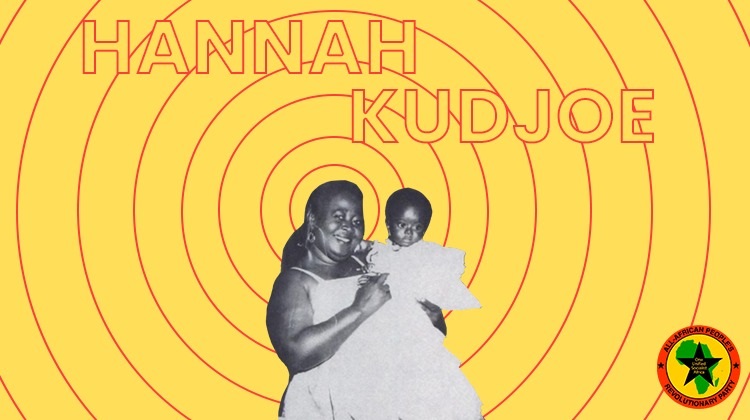 Uninvolved in politics, Kudjoe had the opportunity to meet Kwame Nkrumah in 1947 when he was a guest in her brother’s home. Ghana was still a colony of Britain, and Kudjoe’s brother, like countless African people, actively engaged in resistance to this oppression. Kudjoe’s conversations with Nkrumah on that glorious occasion left her convinced to become active in politics. Recounting this meeting decades later, Kudjoe recalled,

Somewhere in June 1947, we received a charming gentleman, he was introduced to me by my brother as Kwame Nkrumah, General-Secretary of the United Gold Coast Convention, (UGCC). During the day, my brother went out with Nkrumah to address various meetings of the local UGCC branch in town… One day, as they came back and I was serving Kwame Nkrumah, he asked me why I have not been attending the UGCC meetings in town. I was amazed by his question, and I honestly told him I thought politics was only men’s business. For the next twenty or so minutes, Kwame Nkrumah explained to me all they were doing and the importance of everybody, especially women, to get involved. By the time Kwame Nkrumah left. . . my interest was aroused in politics. At work, I began explaining issues to my colleague seamstresses and customers. Whenever I was traveling to visit my dressmaking clients, I talked on trains about the need for our liberation and urging people to join the Tarkwa branch of the UGCC and summoning people together to hear news of the campaign for self-government.” — llman, Jean (2009). “The Disappearing of Hannah Kudjoe”. Journal of Women’s History.

Heeding that call, Hannah went on to become a leading figure in Ghana’s glorious struggle for independence. The lone female participant in the foundation meeting of Ghana’s first mass-based nationalist party, she was nicknamed “Convention Hannah”. While in the Convention People’s Party (CPP), she emerged as a very successful organizer who recruited many people, both men and women, into the movement. She was instrumental in creating both youth and women’s organizations within the CPP often focusing her attention on the challenges that face women in newly independent Ghana, and many other accomplishments.

Following her death in 1986, she was fittingly remembered as, “…a priceless gem who in no small measure contributed to the political emancipation of Ghana from the clutches of imperialism. The vacuum created by her demise … will be difficult to fill.”— llman, Jean (2009). “The Disappearing of Hannah Kudjoe”. Journal of Women’s History.

The All-African Women’s Revolutionary Union recognizes and appreciates the tireless work, the immeasurable contributions, and the revolutionary example of Comrade Sister Hannah Kudjoe.