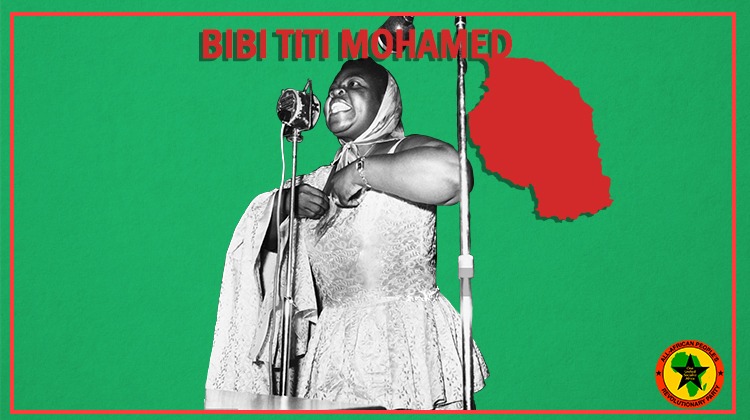 History often represents the role of women, especially women leaders, as less important than men. A name well known in Tanzania as a freedom fighter, an active force in the anti-colonial struggle, and a champion for inclusion of women in the liberation struggle, Bibi Titi Mohamed is less known to the outside world.

Mohamed was born in 1926 in Dar es Salaam, in what was then Tanganyika. Africa was under the scourge of European colonialism, with first Germany and later Belgium and Britain occupying and colonizing Tanganyika. Mohamed’s father forbade her from going to school for fear that she would be exposed to ideas that would challenge Islam, but after his death, her mother allowed her to attend school. She had to discontinue her education after four years because in her culture, once she reached puberty she was confined to her home unless accompanied by an older brother. By age 14 her family had arranged her marriage to a man in his 40s, whom she had never met. She gave birth to a daughter, but he eventually divorced her.

All around her, there was active resistance against cruel colonial aggression and growing resistance against the crushing patriarchy that was further limiting the lives and advancement of girls and women. By the early 1950’s, the Tanganyika African National Union (TANU) emerged as a major political party, that gave voice and expression to the people’s aspirations for freedom, under the leadership of Julius Nyerere. It was here that Mohamed became a powerful voice in the national liberation struggle. She became the chair of the Union of Women of Tanganyika (UWT) which was the women’s and is credited with enrolling over 5,000 women to TANU and uniting women throughout the nation. According to Mohamed,

The women were the first to join TANU in Dar es Salaam. The men listened to Nyerere’s speeches, but they were frightened. They were really afraid; you understand? So the women joined. And they could be seen lining up at the TANU office for cards. Many men would send their wives to get cards for them. I myself had about three hundred and fifty cards that I was keeping for people who were afraid to keep them in their houses. Women were not afraid. They had no fear at all.…” — (Susan Geiger, TANU Women; Gender and Culture in the Making of Tanganyikan Nationalism,1955-1965)

The women’s wing played a major part in the independence of Tanganyika and Zanzibar.  Mohammed held leadership positions, travelled, spoke, mobilized, recruited, and significant contributed to the raising of the nationalist consciousness. The work that Bibi Titi Mohamed did was an integral part of the freedom of her nation from the grips of colonialism.

After independence, Tanganyika and Zanzibar united to form the nation of Tanzania where Mohamed held important governmental positions. However, ideological difference with Nyerere led them down different paths, and landed her in prison, accused of plotting with others to overthrow the government. She was released eventually, and her name rehabilitated. Now she is remembered by many as the “mother of the nation”. But despite the regrettable turn of events, Bibi Titi Mohamed’s place in history cannot be denied. Her courageous determination will always be remembered. Her tireless work and brilliant organizing skills continue to be an inspiration to Tanzania, to Africa, and to people everywhere.