You are here: Home / Feature Story / Honoring the Life of Dedon Kamathi 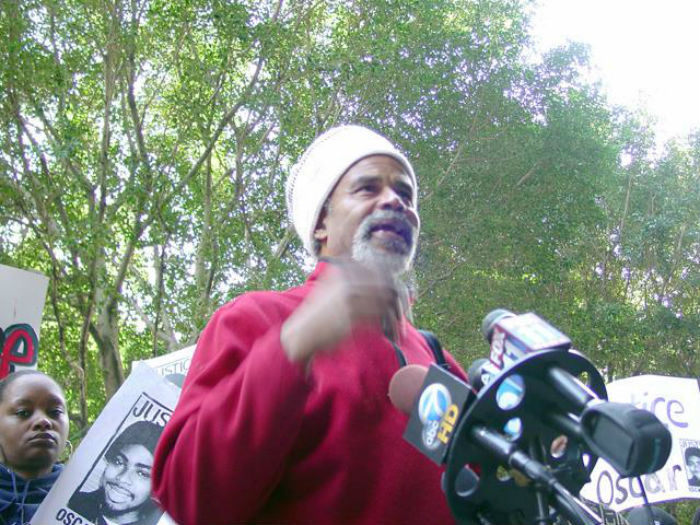 A mighty wind has blown across the oceans and has found a place with the host of revolutionary Ancestors. That mighty wind…the spirit of our Comrade Dedon Kamathi, a long-time member of the All African People’s Revolutionary Party made his transition on August 25, 2015, but his spirit and legacy of his work lives on amongst the struggling masses from Aswan to Azania, from Lisbon to Los Angeles and beyond.

Brother Dedon Kamathi was a member of the Black Panther Party in California until he joined the ranks of the All African People’s Revolutionary Party in the mid-1970s.

Comrade Dedon was a member of one of the early AAPRP work-study circles in Los Angeles and quickly advanced as a leading Cadre member of the Party by 1976.

He was a leading organizer in the Sammy Young Student Organizing brigade for in the Southern California area and helped to recruit and build member on the various campuses that he spoke and organized events. Brother Dedon was a determined revolutionary, committed to the destruction of capitalism and imperialism and all its forms and committed to building Pan Africanism both at home and abroad.

It was his superior organizing skills and dedication to strategies and tactics that made him a creative genius in the battle for the liberation of our people.  He was a graduate of University of California Los Angeles and in his commitment to continue to build Pan Africanism, he travelled to Washington D.C. where he attended Howard University and helped to organize a thriving chapter in the DC and Maryland area. He also traveled and spent time organizing and building in Brazil and Ethiopia developing his knowledge and skills organizing Pan Africanism wherever the Revolution called him.

Dedon returned to the southern California region and continued to organize and advance pan Africanism and the battle to destroy imperialism and all its agencies through creative collaborations with both AAPRP organizers, alliances, Brother and Sister Organizations and the community who grew to love him.

Besides his work in coordinating African Liberation Day in Los Angeles, coordinating the Recruitment Orientation taskforce and becoming a lead Propagandist via his photography, research, and superior journalist skills, he helped to lead various campaigns under the AAPRP banner to Smash the FBI/CIA. Namely the Crack Cocaine and CIA campaign which exposed  the CIA’s role in destroying African and other communities around the world through the distribution of cocaine and arms destroying to fund the imperialist government and its operations at the same time destroying future generations of revolutionaries, creating death and destruction of families and communities. He was involved in activities around police abuse after Rodney King was beaten; during peace efforts between Bloods and Crips, and the Free the Geronimo Pratt campaign.  His efforts not only helped to expose the role of neo colonialist elements inside of our communities used to frame our revolutionaries unjustly imprisoned for crimes they never committed, but his work and propaganda technics also helped to intensify the discussion of class struggle and the importance of ‘No collaboration’! The work of this committee led to the eventual release of Geronimo Jiga Pratt and others.

Comrade Dedon continued his work as a journalist on KPFK developing the program Freedom Now where he shared his global musical library, his prolific appetite for International affairs and his contacts from around the world who provided up to the minute news and views on the revolutionary activities of the indigenous and struggling peoples around the world and especially in Africa. There was no local or international political event that he did not engage his skills towards and lend his voice. From the murder of Oscar Grant to the Occupy Movement, from the Jena 6 to the so called Arab Uprising and especially the imperialist attack on the revolutionary nation of Libya. Dedon got involved on every level possible to get the facts, connect with the masses on the ground and lend his support.

His working relationship with former congress person Cynthia McKinney developed into a trusted friendship so much so that he supported her run for President on the Green Party ticket and voted in presidential elections for the first time voting for her.

He also accompanied her and others on a fact finding mission to Libya and Syria. He soon fired up the air waves with the truth of the Imperialist conspiracy and the reality of everyday mass life and struggle on the ground. He returned with video, pictures and documents that supported the progressive movements on the ground and most importantly the imperialist hand in not only creating the chaos in Libya and Syria but also in funding and organizing  reactionary elements to destroy any semblance of democracy and growth in the region. He continued with work researching and reporting on the struggles in Cuba, Haiti, and Brazil and wherever the masses are fighting the just struggle for liberation!

Freedom now brought the truth to the airwaves and provided political education to the community and around the world. He challenged the status quo and liberalism both internationally and within the local communities.  Brother Dedon was not only a committed revolutionary organizer, but he was a father, a brother, uncle, a committed friend to many and an avid surfer. He was a long time member of the Black Surfers, introducing African youth to surf. He started the Pan African Beach Day every year bringing youth and the community together to not just struggle but to enjoy the communion of progressive community.

He was a big lover of world music especially Pan African music and revolutionary music with a message, making friends with musicians, poets, dancers, progressive artists from around the world. . As a brilliant organizer, he brought all those elements together on his radio program, his community and campus work and in his relationship with the community. As a lifelong revolutionary, he inspired, taught and challenged thousands and has garnered the love, admiration and respect of all.

We offer this small salute to our Comrade and Brother Dedon Kamathi knowing that his life was fully committed to the destruction of capitalism and imperialism and the building of Pan-Africanism: the Total liberation and Unification of the United States of Africa under a socialist government. This tribute could not possibly tell the full story nor can his life’s contributions end because of his impact and influence on the local and world community continues to expand the consciousness and commitment of the masses of people that he worked with, uplifted and inspired.

We offer our fraternal condolences to the family of our brother Dedon Kamathi, our community and all our Pan Africanist and Socialist comrades who have worked side by side with our Brother over the decades and who we are should will miss his call ‘Ready for the Revolution!’

We know that the creator and ancestors welcome him into their revolutionary realm and they have received created a seat in the Pan African circle where they will continue to positively influence, watch over and guide our continued revolutionary struggle…forward ever!

On behalf of the AAPRP and AAWRU, we are forever grateful for the revolutionary example of Comrade Dedon Kamathi and the spirit of resistance he leaves behind for us to carry on!

Our community will never be the same without his Revolutionary voice and presence but we can continue the struggle in our own way against colonialism/imperialism towards pan Africanism but using his life as our revolutionary guide.

We are reminded of the words of our revolutionary ancestor and leader, the great revolutionary Thomas Sankara. He tells us that ‘When the People Stand up, the imperialist trembles.”  Let us stand tall as our Brother Dedon did all of his adult life, committed to daily revolutionary action and towards the Total Liberation and Unification of our peoples towards the creation of a socialist United States of Africa. Smash capitalism and imperialism. Smash Zionism and all its various formations.

We stand with our brother and the imperialist with tremble and be crushed!

Let us honor our brother with our continued commitment to this revolution to the end!

We remain ready for the Revolution!

All power to the Revolutionary Masses!