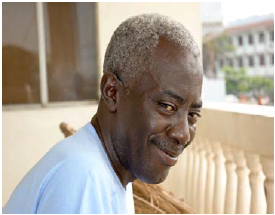 Okerhiere "Reggie" Pedro was a gifted artist, a dedicated community activist, a Pan-africanist, and a great friend. Born in South London February 22, 1972, son of Robert and Elizabeth Pedro from Nigeria, Reggie was the second of four siblings. He is survived by his brothers Michael and Ose and his sister Elahor Pedro.

Reggie earned a first class BA (honours) Fine Art degree from the University of West England, Bristol and a MA in Illustration at the Royal College of Art, London. Reggie was an extremely talented visual artist and illustrator. His talents did not go unrecognized. He was the recipient of many awards including Best Illustrator within the Music Industry in 1999 (2000), Parallel Media Prize and the Painters-Stainers Award of Excellence at the Royal College of Art (1996). Reggie’s work was shown widely in England, the United and Japan. In the African community in London, Reggie was widely known and loved for his staunch commitment to African unity, political activism, sense of humour, gentleness, and generosity.

He was a long-time member of AJAMU, the All African People’s Revolutionary Party (A-APRP), ALISC Network and a devoted supporter of the Kilombo Journal. Reggie extensively contributed to many other organizations in the community. He strongly believed in a better Africa was possible and worked tirelessly towards African Unity. He was a community organizer, an avid student of African-history, and an outstanding brother.

Reggie was deeply loved by his family and friends. He will be sorely missed but always remembered and celebrated. May he rest in peace. May the ancestors have compassion on him, richly bless him and light his path to the spirits realm.

Pedro is best known for his record cover artwork for Mercury award-winning band Gomez between 1998 and 1999, for which he won an award for best illustrator within the music industry in 2000.