You are here: Home / Feature Story / History of the PAIGC 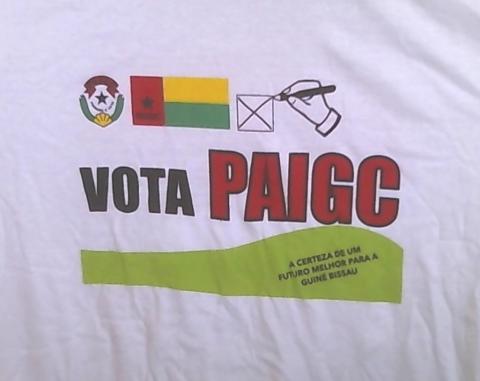 “In Africa we are all for the complete liberation of the African continent from the colonial yoke, for we know that colonialism is an instrument of imperialism. So we want to see all manifestations of imperialism totally wiped out on the soil of Africa; in the CONCP we are fiercely opposed to neo-colonialism, whatever its form. Our struggle is not only against Portuguese colonialism; in the framework of our struggle we want to make the most effective contribution possible to the complete elimination of foreign domination in our continent.”      Amilcar Cabral

PAIGC (African Party of Independence of Guinea and Cape Verde) was conceived as a Pan- African instrument against imperialism in GB and CV. It later formed a larger Pan-African instrument, called Conference of Nationalist Organizations of the Portuguese Colonies (or CONCP) (including MPLA, FRELIMO, MLSTP) as an instrument against Portuguese imperialism and its NATO allies, but more importantly part of a Pan-African struggle to rid Africa and Africans of all forms of imperialism including neo-colonialism. The PAIGC after its victory over colonialism in 1973, began the next phase of their struggle; the struggle against neo-colonialism.

Neo-colonialism is imperialism’s final stage as Nkrumah explained in his classic “Neo-colonialism: The Final Stage of Imperialism”.  Guinea Bissau is facing an enemy which looks African but acts in the interest of imperialism; a class of vultures on the payroll of NATO and AFRICOM, they are disconnected from the people’s history and determined to arrest the ultimate victory of Guinea Bissau and Africa’s people to liberate their productive forces from foreign control and integrate them into a Pan-African framework.

On 14 November 1980, the first coup d’état in Guinea-Bissau occurred, splitting the Party that liberated and united two African territories. The Cape Verde Branch changed the name of their structures to PAICV, maintaining Amilcar Cabral Thought as their ideology. The Guinea-Bissau branch maintained its original name – PAIGC, while suffering serious challenges to its revolutionary content.

This term was interrupted by a politico-military uprising in June 1998, which ended with the PAIGC out of State Power in 1999. During elections of 2004, the PAIGC won a relative majority with 45 of 100 in the ANP; enough to form the Government, but not enough to guarantee parliamentary support. The presidency was not controlled by the PAIGC again until winning presidential elections in 2009, with Comrade Malam Bacai Sanha serving as President of the Republic. Effectively, from his inauguration in September 2009 until his death in January 2012, the PAIGC controlled all organs of State Power, but not the military.

To eliminate the neo-colonial elements of the military and to continue to decolonize the Guinean economy, the PAIGC Government sought a solution in a Pan-African framework turning to its CONCP partner the MPLA Government in Angola.

The subsequent agreements resulted in substantial investments, a line of credit, partnerships to develop Guinea-Bissau’s deep water port, (to be the deepest in all of West Africa); and exploit its bauxite reserves.

The Guinea-Bissau military initially cooperated then resisted. After PAIGC candidate  Carlos Gomes Junior won the first round with 49% in the election to replace president Sanha, the military interrupted the run-off election with a coup d’état on 12 April 2012. The coup was allegedly supported by the neo-colonial forces that control ECOWAS, particularly Nigeria, Cote d’Ivoire, Burkina Faso and Senegal. The same ECOWAS that initially condemned the coup – insisted on “zero tolerance” for coups – made a 180° turn.

They imposed the “transition” anti-democratic Interim president and government; and ordered the same coup maker military to protect them. This was followed by an ECOWAS military mission to replace the Angolans. The exact words of the Nigerian Foreign Minister were; “there cannot be any Angolan military in West Africa…”. Effectively, Guinea-Bissau became neo-colonized by the forces that control ECOWAS. In record time, they exploited everything exploitable; from lumber to fisheries, while emptying the State coffers and where possible, putting the Country more into dept.

The People took to the streets. Workers and their unions, youth and women in a United Front (FRENAGOLPE) with the PAIGC and all its organs JAAC (youth organization) and UDEMU (women’s union), which stood in defiance of the military and the coup makers. Numerous beatings, arrest, kidnaps, detentions and death threats did not shatter the Front. They forced the coup makers to commit to return to a democratic process. The coup makers thus employed a new strategy.

This strategy was to keep the PAIGC out of power, drastically reducing access to resources for Party operations. Secondly, decapitate the Party leadership; replace it with an “Ad hoc” conformist leadership that would go along with the coup makers. Thirdly, introduce a lot of candidacies into the leadership competition and deeply divide the Party leading up to the PAIGC’s 8th Ordinary Congress, due to take place prior to 2014 General Elections. The intention was that the PAIGC would divide and result in several different “independent” candidates for President of the Republic, each from the PAIGC camp supported by divided militants and supporters, creating conditions for another candidate to win in run-off elections. The strategy didn’t work. The PAIGC united all candidates for Party leadership into a united “Alliance” which won the Congress in February 2014 and subsequently won Legislative Elections on 13 April 2014.

The PAIGC candidate for President of the Republic, Comrade Jose Mario Vaz, came in first place against 12 other candidates, with 41% of the vote. Now he is in a run-off against the second place candidate, Nuno Nabian who got 25%. Run-off Presidential Elections will take place on 18 May 2014. The campaign officially begins on 2 May, (the day after International Worker’s Day).

Jose Mario Vaz victory is certain in the Presidential Elections with help of the Pan- African and progressive forces inside and outside of Africa. This victory will guarantee that the PAIGC controls all organs of State Power empowering it to carry out the needed military reforms resulting in military’s service to the people’s political will. .

Defending the PAIGC is Defending the path to Pan-Africanism: the liberation and unification of Africa under Scientific Socialism.

“The Weapon of Theory” a speech given by Amilcar Cabral in Cuba explains the necessity of ideas in defining the peoples struggle for liberation. The resilience of the Guinean people and PAIGC in the face of brutal military oppression represents the legacy of the great revolutionary Pan-African thinkers in general and in particular the ideas in the writings, teaching and organizing work of Amilcar Cabral.

Amilcar Cabral was one of the main founders of the PAI, (African Party of Independence) on 19 September 1956, which later added GC for Guinea and the Cape Verde Islands in 1960. It is the only Party that successfully led a People’s Armed Struggle for National Liberation in West Africa and considered to be one of the most serious Liberation Movements in all of Africa and is a traditional Ally of the most revolutionary Parties and States serving as an entry point into West Africa for them. Prior to unilaterally proclaiming independence, it already had the nucleus of a State with its own economy that emerged from the People’s culture; with People’s Stores; People’s Popular Justice Committees; People’s Revolutionary Armed Forces / Militia; educational system and structures for just international cooperation relations.

Cabral also strongly influenced the foundation of FRELIMO (Front for the Liberation of Mozambique – http://www.frelimo.org.mz) and strongly influenced the development of MLSTP (Movement for the Liberation of Sao Tome e Principe) particularly while it had its office and leaders in Conakry, not far from the PAIGC’s Headquarters. While in Conakry, Cabral became very close to Ahmed Sékou Touré and Osageyfo Kwame Nkrumah.

PAIGC armed militants contributed in fighting against the Apartheid South African invasion into Angola; using anti-aircraft missiles to deter South African jets that attempted to prevent Agostinho Neto from Proclaiming Independence on 11 November 1975. It was the PAIGC who introduced MPLA to the Cubans, who for their part eventually sent more than 300,000 Internationalists to militarily and politically support the MPLA against the Apartheid South African / CIA invasion into Angola. Most of the weapons used by Cuba in Angola were transported through Independent Guinea-Bissau’s airport.

Cabral is one of the main founders and coordinator of CONCP, (Conference of Nationalist Organizations in the Portuguese Colonies) http://casacomum.org/cc/arquivos?set=e_2767 (See Cabral’s speech at the CONCP 1965 Conference in Dar Salaam. http://www.marxists.org/subject/africa/cabral/1965/tnmpc.htm ).

CONCP’s Pan-African structures and coordination of armed struggles across national boundaries were appreciated by Kwame Nkrumah in the Handbook of Revolutionary Warfare, see page 53; (to download a copy, click http://libyadiary.files.wordpress.com/2012/09/handbook-of-revolutionary-warfare-a-guide-to-the-armed-phase-of-the-african-revolution.pdf)

Outside of Africa, Cabral is one of the founders of the Organization in Solidarity with the People of Africa, Asia and Latin America http://www.tricontinental.cu/index.php/la-ospaaal-al-dia/37-actividades/602-rinde-la-ospaaal-homenaje-a-amilcal-cabral-en-aniversario-de-su-asesinato (OSPAAAL).

Amilcar Cabral’s incarnation continues to serve as the ideological model to follow. The revolutionary consciousness instilled in the People due to the mass conception of the PAIGC www.paigc.org and the mass nature of the glorious Armed Struggle for National Liberation using the People’s culture are the very reasons that the PAIGC is still alive, vibrant and struggles to this day. Cabral gave priority of all priorities to training cadres, who would continue his work in theory and practice after his physical disappearance.