You are here: Home / Current Events / Hands Off Haiti! 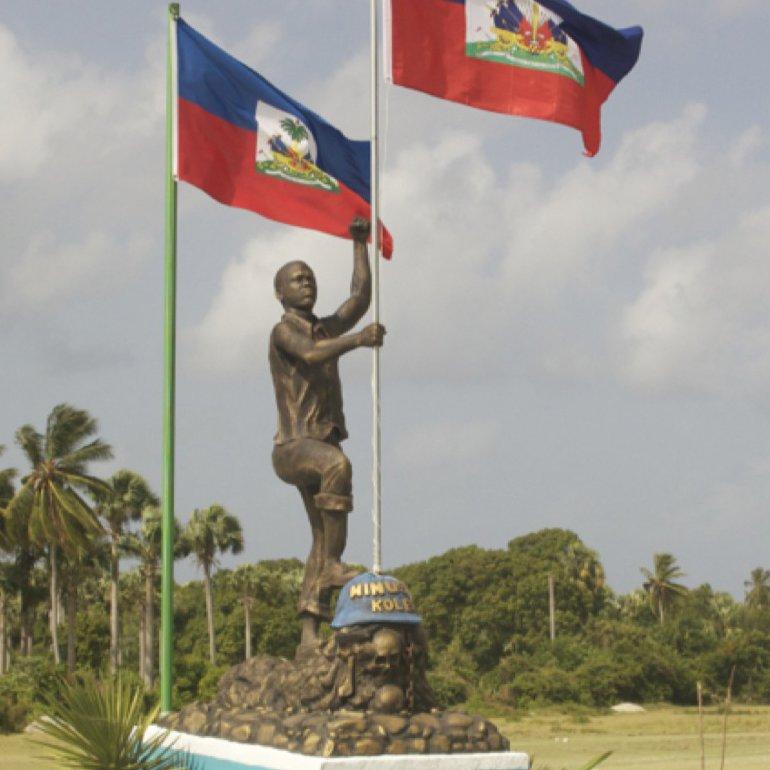 Statue in Haiti promoting the resistance against the UN occupation

No U.S./UN troops in Haiti

The All-African People’s Revolutionary Party (A-APRP) says no to U.S. or UN troops in Haiti. The A-APRP refutes any attempt by the United States and any other imperialist forces to use the assassination of the unpopular President Jovenel Moise as an reason to intervene in Haiti. The A-APRP is keenly aware that the puppets of neo-colonialism in Haiti are again seeking US-UN military intervention in Haiti to stem the tide of the people’s righteous rebellion.  This is a case of Puppets asking the puppeteers for help, or slaves asking their masters for assistance. The exploitation and oppression of the People of Haiti  has always been directed by the U.S. and their imperialist allies, France, Canada, the CORE Group the United Nations and the Organization of American States. They have manipulated elections, Kidnapped Popular leaders, raped and murdered women and children, Installed the puppet government of the infamous Papa Doc and Baby Doc Duvalier, invaded the country and stolen billions of dollars in aid provided by friendly neighbors. All in an attempt to crush the spirit of resistance embodied in Haitian culture  and consign the people of Haiti to poverty, underdevelopment, sickness and modern slavery.

The A-APRP stands in support of the people’s struggle against racist neo-colonialists led by the United States and their agents in Haiti who are calling for U.S. and U.N. intervention. The A-APRP is eternally grateful to the people of Haiti who have always stood in the forefront of the African struggle for liberation, independence and Justice. We can never forget the part played by Haitian masses in the struggle to end slavery throughout the western hemisphere and remain constantly grateful for the Haitian People’s continued leadership in the African fight against capitalism, imperialism and their colonial and neo-colonial strategies.

Mass protests have been taking place in the small Caribbean country of Haiti for several years now. Those protests are so intense that they threaten to bring the country to a complete standstill. The Haitian government’s response to the protests have resulted in dozens of deaths and massive destruction throughout various parts of Haiti, particularly throughout the capital city of Port-au-Prince. The current protests have been taking place since August of 2019.  The masses of Africans in Haiti, infuriated by the government’s increases in fuel prices, have been engaging in open revolt against the government of the recently assassinated Moise. The capitalist media is reporting that the basis of the protests were demands that Haitian President Jovenel Moise resign from office, but the underlining reasons for the unrest go much deeper than that.

Haiti remains the poorest country in the Western Hemisphere. It has occupied that position for centuries since the courageous people of Haiti rose up to overthrow French domination in 1804. That revolution made Haiti the first nation in the world to abolish slavery and defeat French imperialism, and leading the fight against slavery everywhere

The emerging capitalist and imperialist countries had no intention of ever forgiving Haiti for that act of dignity and no later than two mere years after its independence, the U.S. slapped economic sanctions on Haiti in 1806, refusing to trade with them until 1862. In 1825, France, assembled a fleet of warships in the bay of Port-au-Prince in preparation for a military invasion of Haiti. Backed by the U.S., France used the threat of invasion to extort 150 million gold francs (the equivalent of 21 billion USD today) to “compensate” France for colonizing and enslaving Haiti.

This is like a burglar, robber, rapist, etc., charging you for their continued terrorist efforts against you. These actions kept Haiti indebted to France until the last payment was made in 1947. Along with ongoing U.S. invasions, embargoes, occupations, and support for oppressive regimes, the Haitian people have been prevented from being able to achieve their full potential as a free and developing nation. All of these examples of historic and present day systemic oppression explain why the people are in the streets today.

The best way people around the world, specifically African people, can support the Haitian masses is by organizing themselves to fight to defeat neo-colonialism everywhere. The masses of people in Haiti, who have nothing to lose, but their chains, are once again the tip of the spear, aimed at the heart of neo-colonialism/capitalism. Africans in Haiti need Africans everywhere to support their efforts.  More importantly, they need us to take up the fight to confront the enemy-and seize power over our lives. The fight against neo-colonialism is the frontline fight for Pan-Africanism. This is proven true in Cuba, Libya, Venezuela, Ivory Coast, and everywhere that Africans have challenged neo-colonialism (whether the victory was temporary or not).

Haiti is challenging neo-colonialism. They have already transformed the island from a zone under enemy control to a zone that is being hotly contested. The next objective is to liberate Haiti and place the Island-Nation’s affairs in the hands of the Haitian People, who are Africans.

If you are sincerely tired of seeing this oppression against our people in Haiti (and everywhere else), we ask you to join the All-African People’s Revolutionary Party or any organization working to build revolutionary Pan-Africanist capacity to solve our problems.