You are here: Home / Feature Story / Hands Off Assata! 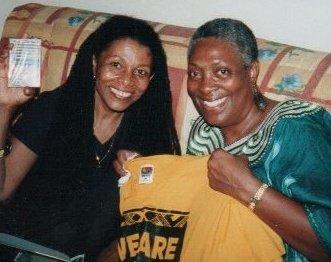 Assata Shakur well known and revered member of the Black Panther Party/Black Liberation Army and Revolutionary, who is currently living in exile in Cuba has been placed on the United Snakes most wanted “terrorist list”. As we begin to reflect on the impact that Assata has had on an entire generation, on many African women and on the African revolution we must stop and recognize that this decision and announcement is primarily a fear tactic. This move is a direct act that is geared towards frightening revolutionaries from openly opposing and organizing against U.S. Imperialism. In addition this shift puts pressure on the Cuban Government and Raul Castro to “hand over” Assata.  The A-APRP is clear that Cuba will not bow down to capitalist pressure just as they have excelled under a 51 year embargo imposed by the US government.

The United States talks about humanitarian aid and the need for the Cuban government to treat citizens well. However they enacted a policy in 1962 to hinder Cuba from developing socially and economically in a vain attempt to turn to the people of Cuba against its revolutionary leadership. Fortunately, the embargo did not stop Cuba or the Cuban Communist Party from moving forward to push for the development of socialism. The real challenge is that the United States does not want an alternative ideology or a practical example of a revolutionary alternative to capitalism so close to its shores. They are afraid that this ideology, if continued to be given life, will wipe out the capitalist driven ideology (that has the world paralyzed) and will begin to show the people that capitalism is not the only economic system or way of life.

Back to Assata, when we think about FREEDOM FIGHTERS we automatically think about Assata Shakur not only because she was a member of the legendary Black Panther Party, but her commitment to the African Revolution and Pan-Africanism has not wavered since her transition to Revolutionary Cuba. She could have lived a life underground but instead she emerged and has been a voice for the people from Cuba and freedom loving people throughout the world!!  Selflessly she dedicated her life to the revolution and continued organizing from Cuba.

We must ask ourselves why now in 2013 the U.S. is putting her on the wanted “terrorist list”? Is this a tactic to put fear in other revolutionaries?  Is this a tactic to try to create dissent in Cuba? Is this move geared towards weakening Socialism?  Is this creating the justification for invading and attacking Cuba?  We must remember that we are all Assata Shakur and no matter where we are or how secure we find ourselves when we stand up against the oppression and exploitation of capitalism we can be the target of such measures. In order to ensure that we or our children do not have to live in these conditions we must immediately move to organize to achieve Pan-Africanism: The total liberation and unification of Africa under Scientific Socialism!!!