You are here: Home / Archives / Haiti Will Reclaim Its Sovereignty! End the Occupation, Now! 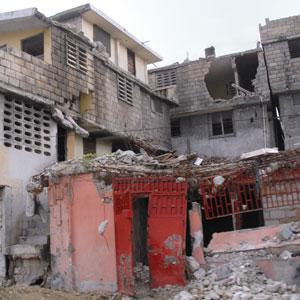 “You never let a serious crisis go to waste. And what I mean by that it’s an opportunity to do things you think you could not do before.” — Rahm Emanuel

Not Wasting a Good Crisis

The Haitian People will Reclaim their Sovereignty and Freedom

Links/Sources of Information on Haiti

The world media led by the U.S. corporate media are quick to point out that the January 12, 2010 earthquake that damaged Haiti was “biblical in nature” followed by other disasters, such as, a hurricane, rains and more rains only to have near year end this island nation is visited by a raging cholera epidemic. This is the visual scenario but the words written or spoken always include the following phrase: “Haiti is so very poor, the poorest country in the Western Hemisphere.” This is such simplistic nonsense. Poverty is no natural disaster and cholera is no natural disaster but if one takes a cursory look at the history of Haiti for past 200 years you will see where military occupation and interference of the U.S. and France are contributors to the poverty of Haiti with their exploitation of Haitian labor and the privatization of all aspects of society from education to economy to natural resources to the military and security of the people. Let’s take a brief look at the history of Haiti for the past 200 years you will see the boot of the U.S. on the necks of the Haitian People.

Not Wasting A Good Crisis

The above history, although brief in its presentation, clearly shows that the Haitian People does not own or manage their resources, economy, military, and political aspects of their lives or government – who benefits from this arrangement? The benefactors of colonialism and the occupation of Haiti are the foreign powers primarily the U.S. and the Haitian elite class.

How was the advice of Rahm Emanuel acted on – here’s how:

The U.S. hand-picked Haiti’s President, Rene Preval, was so traumatized by the earthquake of January 12th that he was speechless for 15 days but the U.S. led imperialist forces were not going to let this crisis pass them by without ensuring their agenda of “complete and absolute ownership” waste away. Foreign governments, NGOs, corporations, and military immediately rushed in and quickly took over all of the structures of Haitian government – took control of everything! When President Preval finally did speak it was to okay the legalization of this occupation of Haiti over the strong objection of the Haitian People.

President Preval, always the dutiful representative for the occupiers, declared a “State of Emergency” in Haiti due to devastation brought on by the earthquake. On March 8, Haiti’s house of Representatives, a large majority of which belongs to Preval’s party, voted for the State of Emergency law that calls for the formation of an Interim Commission for the Reconstruction of Haiti (CIRH), led by former U.S. President William (Bill) Clinton (a United Nations special envoy to Haiti).

Since Haiti’s House of Representatives had played their role and caved in to the will of the occupiers there was one more legislative hurdle to overcome and that was Haiti’s Senate and they would prove to be harder to crack. In an April 8th meeting, the Senators voted ‘no” to the State of Emergency Law and the CIRH. Another vote on Tuesday April 13th was held. The April 13th vote was successfully blocked by the lack of a quorum. The Haitian Senate now numbers 25 because of two deaths from the earthquake. It needed a quorum of 16, but only 15 Senators participated. President Preval conducted a late-night parliamentary session on April 15th this finally did the trick! With barely a quorum of 16 senators, 13 voted for the State of Emergency law, 1senator voted against the law, and 2 abstained. Let’s look at the CIRH now that it’s a “legal component of Haitian law.”

After this Law was passed a structure must be put in placed to carryout the reconstruction of Haiti after such a Biblical earthquake has taken down “poor Haiti.” This Law introduced a vile structure called the Interim Recovery (Reconstruction) Commission for Haiti (CIRH). It is the ICRH that is running and controlling all facets of alleged reconstruction of Haiti today. President Preval has issued a couple of articles to further grant powers to the CIRH, to “reclaim any land in the country, no matter where and for whatever reason.” In the 1987 Constitution the Haitian People took great care to guarantee that no foreigners could own land in Haiti, but Preval under the amended State of Emergency Law violated the sovereignty of Haiti. The primary job of any president is to protect the sovereignty of their country — Preval and his cohorts will not be forgiven for this act of treason.

The CIRH meets once a month, the Commission is a 26 member Board – half are Haitian none popularly elected (all are from the judicial, legislative, and executive branch of government) and other half are foreigners and in an attempt to appear transparent the Commission has a website and publish their meeting minutes.

Basically this Commission oversees the “reconstruction” of Haiti and doles out the millions of dollars for various projects that they decide to finance. With both eyes shut one may think this division on the Commission seem fair and equitable. Nothing could be further from the truth. The organization of the Commission Board comprised of two co-chairs and an Executive Director who is under the Board Chair. The Co-Chairs and Executive Director is the seat of all decision-making and control of the funding project. It now gets slimy – the two co-chairs are Haiti Prime Minister, Jean Max Bellerive, who in October 2009 was hand-picked by the U.S. to be President Preval’s running mate. Foreign co-chair is none other than former U.S. president Bill Clinton, hold on it gets better, and CIRH Executive Director is Gabriel Vetter comes from USAID and the World Bank.

One final word on the CIRH – the CIRH term is about 18 months at which time it dissolves from a temporary formation morphs into an “Agency for the Development of Haiti” now isn’t that sweet for the colonial masters!

The Haitian People will Reclaim their Sovereignity and Freedom

The Haitian People must continue to organize themselves but on a massive scale – a people united, resolute and discipline will restore the sovereignty of Haiti. Though the corporate news media does not write about it or broadcast it on your nightly news channel the Haitian People are in mobilization mode. It is an error to present the facts as if the Haitian People have passively accepted their country being taken from them. The following are some acts of mass action and mobilization that were taken by the People to change the direction being taken against them and Haiti:

The Haitian People are not cowering in the face of U.S. occupation of their country. We of the African nation and African Diaspora must stand with/beside our sisters and brothers of Haiti. We who hold residency in those foreign governments that are attempting to re-colonize Haiti must hit the streets and loudly protest the government illegal occupation of Haiti. We must conduct forums, teach-ins to get out the truth of what is happening in Haiti as the story is not being told in the corporate media. Just as the People of Haiti are taking to the streets are engaging in mass action we must do so in concert. We, stand with the Haitian People in solidarity, we demand an immediate end of foreign occupation of Haiti, Now!

Links/Sources of Information on Haiti