You are here: Home / Feature Story / Forward with the Zimbabwe Revolution 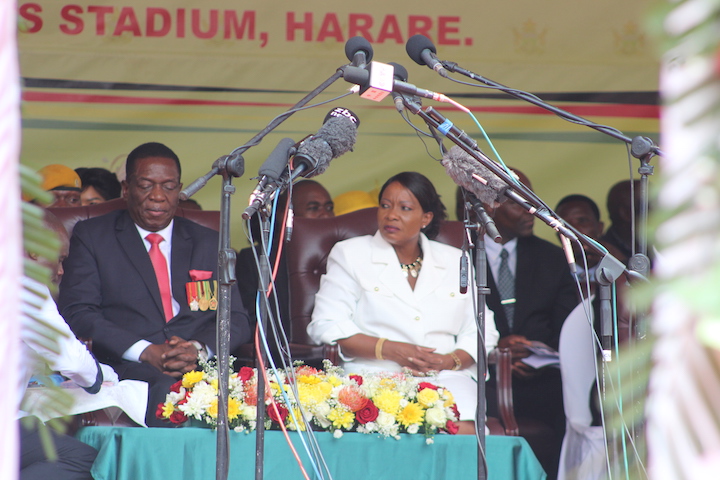 Say No to Imperialist/Colonialist intervention in African Affairs!

Zimbabwe has been under vicious attack since the start of the fast track land reclamation process that begun in 2000. The ZANU-PF government, led by President Mugabe, allocated to new farmers over 4,500 farms making up 7.6m hectares of land.  This reclaimed land was distributed to over 300,000 families across the country.

In response to this land reclamation, western imperialists demonized President Mugabe and ZANU-PF.  The Commonwealth moved on Zimbabwe.  Britain and its’ successfully settler colonies – Canada, Australia and New Zealand led in expelling Zimbabwe from the Commonwealth.  This severing of economic relationships caused suffering in Zimbabwe.  At the same time, sanctions by Britain, USA and EU cut off financial support and seized Zimbabwe properties abroad. Sanctions also prohibited travel, by leading members of ZANU-PF, to the US, UK and EU.  All of this was a coordinated effort to strangle Zimbabwe economically.  Which led to hyperinflation.  This is the same tactic used years earlier against Mozambique, used against Cuba for years and used most recently to disrupt Venezuela.  The imperialist countries hide behind their legal structures with official votes in congress and Parliament but we know this is criminal and immoral.  It is designed to force a regime change, but makes the masses suffer.

The defense of settler colonialism is the root of this ruthless attack on the people of Zimbabwe. European settler farmers in Zimbabwe have white privilege, obtained through settler colonialism.  European settlers in USA, Canada and Australia are defending this white privilege.  The leader of the pack is Britain, the mother of these settler regimes.  This process of settler colonialism has birthed the most barbaric, terrorist regime of all time – the USA.  Its hundreds of military bases, CIA operations, and trillions of dollars spent on war is built on the near genocide of the indigenous people of America.

Sanctions by Britain, USA and EU have caused Billions of dollars of damage to the economy of Zimbabwe

Quoting from the website of a senator for opposition party MDC – posted 10 July 2013, “The West’s illegal economic sanctions regime has cost Zimbabwe at least US$42 billion since 2001, with negative effects on vulnerable groups that saw their livelihoods decline to pitiable levels.”  The sanctions have continued another 4 years since that post.  A conservative estimate is well over US$55 billion in damage has been done to date.  This should be the focus of all discussion around Zimbabwe.

False claims of dictatorship, human rights violations, election fraud and economic mismanagement have the intention to take the focus off the illegal and immoral sanctions that causes billions of dollars in economic losses each year. The West insistence on President Mugabe stepping down because of his age or years as head of state were just further distractions from the economic plunder caused by imperialist sanctions.

Pan-African forces, socialist forces, and every individual and organization that stands for justice should be outraged at the continued attempts to destabilize Zimbabwe.  The destabilization campaign caused hyperinflation and the eventual abandonment of the Zimbabwe dollar.  It led to Zimbabwe’s highest level of unemployment.  It also surfaced corrupt individuals at all levels and in all political parties that sought to take advantage of the instability for personal gains.  This is the nature of the world dominated by capitalism and imperialism and has our mother Africa overrun by neo-colonialism.

Today, nowhere in Africa is a revolutionary socialist political party able to conduct the socialist process. Zimbabwe’s land reclamation process was one of the most significant steps in the direction of socialism in Africa and the world in the 21st century.  This is why capitalism is so intent on disrupting and discrediting the land reclamation.  We must Salute President Mugabe for providing the leadership of ZANU-PF for initiating this process and conducting it over so many years.  We must also salute President Mugabe and ZANU-PF for laying the groundwork for this process by diversifying the economy and educating a wide segment of the population leading up to the land reclamation.

We call on the revolutionary forces in ZANU-PF to stand strong in continuing the commitments to the people initiated by land reclamation.  Land is the basis of power.  Also, we call on and support ZANU-PF in extending the processes of transformation of society to completely empower the people.  We support the call to turn ownership of the factories, banks, the mines, and all of Zimbabwe’s resources over to the masses of Africans.  The All-African People’s Revolutionary Party (A-APRP) stands ready to assist Zimbabwe in any way we can in this process toward socialism.  Revolutionary political education is critical to understanding this attack by imperialism and the necessity of socialism and Pan-Africanism.  Our party organizes political education circles and seminars across Africa and in the Diaspora to assist in this process (visit www.aaprp-intl.org for information).  The A-APRP has supported the liberation process in Zimbabwe for the past 45 years and will continue to support the people of Zimbabwe, ZANU-PF and all revolutionary forces in Zimbabwe.

We call on Pan-African revolutionary forces and socialist forces to stand up against corruption in all forms.  The Pan-African movement must unite to support the right of Zimbabwe and all of Africa to reclaim the land and resources stolen under the reign of settler colonisers.

“The total liberation and unification of Africa under scientific socialism”