You are here: Home / Feature Story / Pan-Africanism as Internationalism 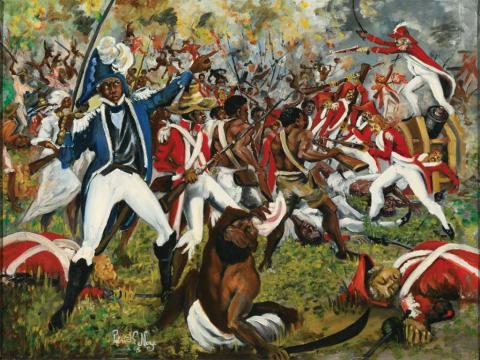 January 1st  marks the revolutionary anniversaries of Haiti and Cuba, two of the most successful and perhaps the most important revolutions in the Western Hemisphere (known to the indigenous as Turtle Island). As we remember the contributions of comrade Fidel Castro  and go into the new year, the All-African People’s Revolutionary Party invites you to reflect on the Pan-African nature of these revolutions and their internationalist missions. This goes beyond the greatness of the liberation of two islands beset with settler-colonialism and slavery.

Pan-Africanism nor Internationalism were formal terms during the Haitian  Revolution but the concepts were displayed through the actions of national unity with Africans throughout the hemisphere (Pan-Africanism) and  through unity with the struggles of oppressed peoples against settler-colonialism and imperialism (Internationalism).

The African revolutionary struggle is not a isolated one. It not only forms part of the world socialist revolution, but must be seen in the context of the Black Revolution as a whole. In the USA, the Caribbean and wherever Africans are oppressed…In these areas, the Black man is in a condition of domestic colonialism, and suffers both on the grounds of class and of color.

We want to highlight the role that African freedom fighters played in the shaping of both the Cuban and Haitian revolutions internally and more importantly in the linking of their struggles to the world struggle against colonialism and slavery. Africans forged their unity in the western hemisphere through uncompromised resistance, no matter where they came from on the African continent they fought enslavers; in the dungeons, on slave ships and the plantations. Haiti in the struggle to end slavery; displayed one of the highest expressions of Pan-African unity in their victory over the French in 1804.

Haitians made their revolution a battle for self-determination against slavery in the western hemisphere; a struggle against the settler-colonialism of the French, Spanish, British, U.S. and their genocidal exploits in the region. Any enslaved person who reached Haiti was free and protected. The Haitians conscious restoring of the indigenous name “Ayiti” (Haiti) to the island speaks volumes of their respect of the Taino peoples (the island’s original inhabitants). Jean Jacques Dessalines and the Haitian army not only liberated slavery on their side of the island but continued to liberate enslaved Africans on the Spanish controlled side of Island. Yet, the Haitians’ revolutionary vision did not end there. They supported the march of Simon Bolivar through South America, giving him arms and soldiers to help liberate territories today known as Bolivia, Colombia, Ecuador, Panama, Peru and Venezuela. Haiti demanded one thing of Bolivar- that he free the slaves. The revolutionary internationalism of the Haitian revolution would inspire anti-imperialist Pan-African visionaries to come like Anna Julia Cooper, Benito Sylvain, Katherine Dunham, Queen Mother Moore, CLR James, George Padmore and Kwame Ture (AKA Stokely Carmichael).

The Cuban revolution exhibits the highest Pan-African unity between Africans in the west and African liberation struggles in Africa. Africans’ struggles in Cuba against slavery did not start with the Haitian revolution but was certainly inspired by it. In fact, many French slave owners escaped to Cuba. The spirit of the Cuban revolution is deeply linked to the struggle of African people for freedom and justice on the island from the Pan Afro-Cuban movements in the 1800’s that combined the struggles of free and enslaved Africans fighting for liberation to General Antonio Maceo’s refusal to have peace with the Spanish colonizers unless slavery was abolished.

The 1959 Cuban Revolution overturned neo-colonial rule imposed by the United States (U.S.) in the Platt Amendment. Before the revolution racism in Cuba mirrored the Jim Crow south in the United States. Even President Batista, a person of mixed blood who defended and served the ruling white elite in the U.S. and Cuba, was not allowed to participate in white social society. More importantly, African people were largely under and unemployed, without education or healthcare in Cuba. The Cuban revolution advanced the struggle of African people on the island bringing free education, healthcare and new policies against racism.

The Cuban revolution led Fidel Castro, Che Guevara, Juan Almeida and others joined the global Pan-African revolution led by the anti-imperialist forces like Kwame Nkrumah, Gamal Abdel Nasser, Sekou Toure and their work in building the All-African People’s and Non-Aligned conferences in Africa and Asia. Cuba became part of the worldwide anti-colonial and socialist struggle and in 1966 hosted the  Tricontinental Conference where the Organization of Solidarity with the People of Africa, Asia and Latin America  (OSPAAAL) was founded. Cuba sent arms and medical support to aid the Algerian independence struggle under Ben Bella. After the assassination of Patrice Lumumba, African Cubans were the first soldiers to participate in armed struggle in Africa led by Commander Victor Dreke. Che Guevera ran this operation in the Congo disguised as a doctor.

Cuba’s Operation Carlota in Angola, (named for the African Cuban shero is its greatest military contribution to Africa. Cuban soldiers in 1988 alongside Angolan, and Namibian freedom fighters defeated the invading U.S. backed racist settler-colonial South African army and Mobutu’s mercenaries from Zaire on the battle field of Cuito Cuanavale. This victory led to a peace accord that forced apartheid South Africa to leave Namibia and start negotiations with the South Africa/Azania freedom fighters of the African National Congress, Pan-Africanist Congress of Azania, and Azanian People’s Organization**. Over 400,000 Cubans served in Angola from 1975-1991- 65,000 at the height. Cuba lost an estimated 10,000 soldiers in Angola many of them of African descent. They all volunteered and fought against global imperialism for the dignity and freedom of African people.

Every revolutionary and progressive person must salute the glorious milestones of the Haitian and Cuban revolutions. Even more, every African must have pride and love for their people’s Pan-African struggles in Haiti and Cuba. As revolutionaries we know the only true love we can give to our sisters and brothers is to continue their work and vision.

Join an organization working for your people in 2019. We invite you to join the All-African People’s Revolutionary Party (AAPRP) this coming year. Find out more at

* *Azanian Peoples Organization pulled out of the negotiations